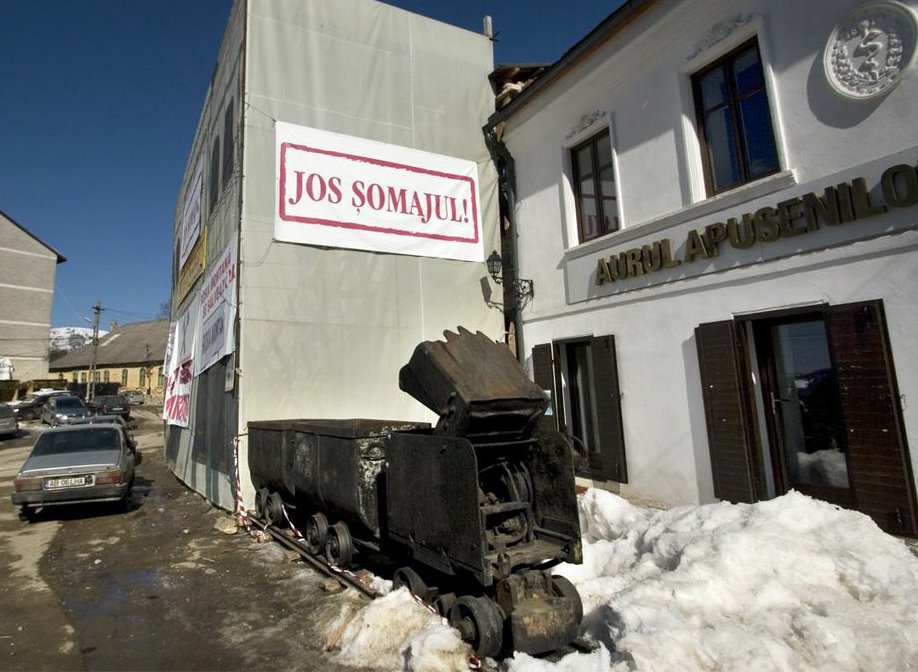 Down with unemployment! - pro-Rosia Montana gold mine billboards at home, while outside Transylvania the PR strategy uses ex-White House staff, top diplomats and a pinch of stardust (picture: Crina Boros)

“I think the company has made errors in the past... We’ve made lots of changes and therefore digging up what has happened is something that I don’t care to do and I don’t think journalists should do.”

These are the words of Jonathan Henry, CEO of Gabriel Resources, the company preparing to build a controversial multi-billion Euro gold mine in Transylvania’s Apuseni mountains, despite massed resistance on the streets of Romania’s largest cities.

We met Henry in a London-based glass and steel office to ask him about the company's PR and lobby practices.

When he told us that journalists should not dive into the company’s past to investigate its historic PR practises, we went ahead and did just that.

Between September and November 2013, tens of thousands of protesters in Bucharest and Cluj-Napoca brought Romania’s largest cities to a state of gridlock.

Every week growing numbers took to the streets to stop the Romanian state from greenlighting the proposed mine in the village of Rosia Montana.

Their arguments against the project included the proposed use of cyanide in the mineral extraction process and demolishing four mountains to refine the gold.

In November 2013, the Government put the project on hold, in a move which experts believe is a delaying strategy before a relaunch after 2014’s Romanian Presidential election.

But the project is nearly two decades old - and has a chequered history.

In 1995 controversial Romanian-Australian businessman Frank Timis created a fresh-faced mining company, Gabriel Resources, based in the tax haven of Jersey.

He later signed a multi-million dollar contract with Romanian state-owned company RAC Deva for mine exploration and development in gold-rich Transylvania.

Timis had run-ins with the law in the past. He was convicted twice for heroin possession.

His energy group Regal Petroleum was fined 600,000 GBP after it plummeted 88 per cent on the London stock market in 2009, following the release of false information about an oil discovery in the Aegean Sea between 2003 and 2005.

The businessman resigned from Gabriel Resources in 2002 and moved on to developing diamond mines in Sierra Leone.

Today, according to the Romanian media, Frank Timis is the wealthiest living Romanian, due to his extensive mining businesses in Africa - and is worth around two billion Euro.

In 2005, the strong opposition to the mining project saw Gabriel Resources stepping up its lobbying presence in Romania.

The new CEO of the company, Alan Hill, told an audience at Bucharest′s Hilton Hotel in October that year that “Frank Timis is a dirty word”, indicating an end to the involvement of the controversial businessman.

Since Timis’s departure, the company has undergone several makeovers, with the addition of high-profile political players to the board.
Former Canadian Ambassador to Romania, Raphael Girard, was brought in as director from 2005 to 2010.

Girard was not shy of using his political connections in Bucharest, which he forged during his time as ambassador, when the company needed to advance the project.

Internal correspondence released by the Canadian Department of Foreign Affairs and International Trade (DFAIT) under Freedom of Information (FOI) show that the former diplomat believed he had inroads with the Romanian President Traian Basescu.

When discussing about organizing top level meetings with Romanian politicians, Girard said: “I did have some considerable contact with [the] then Mayor [of Bucharest] Basescu including giving him top billing at the Canada Day exercises in 2001 when his standing with the Central Government was bad and getting rapidly worse.” (June 6, 2005).

However, Girard also appears to be have been aware of the difficulties faced by President Basescu in meeting company representatives.

On a later occasion in 2006, Girard adds: “the politics of Rosia Montana are still not too auspicious for a president to be seen receiving someone from the company”.

But he intended to pursue the president as “in the not too distant past [Basescu] has remarked to mutual friends that he remembers me with some degree of warm feeling”.

The Romanian Presidency has denied any involvement in preferential discussions with Girard.

She showed solidarity with the protestors by purchasing a strip of land where the mine is planned, urging others to do the same. The gesture was meant to obstruct any mining company wishing to purchase people′s property.

That October, Redgrave was guest of honor at the Bucharest Hallowe'en Ball, which raised money for local NGO Ovidiu Rom′s child education programmes.

For charity, the NGO auctioned a dance with Redgrave.

At the event, Gabriel Resources′ then corporate affairs manager, Irishman John Ashton, pitched in 10,500 Euro for the dance.

While waltzing with the British actress, Ashton tried to convince her to come to Rosia Montana, telling the Socialist activist and 60s icon how the local miners′ unions are supportive of the project and how his company will take care of the people and heritage.

Since then, star of Splash! and Kill Bill, Daryl Hannah, has bought a piece of land. 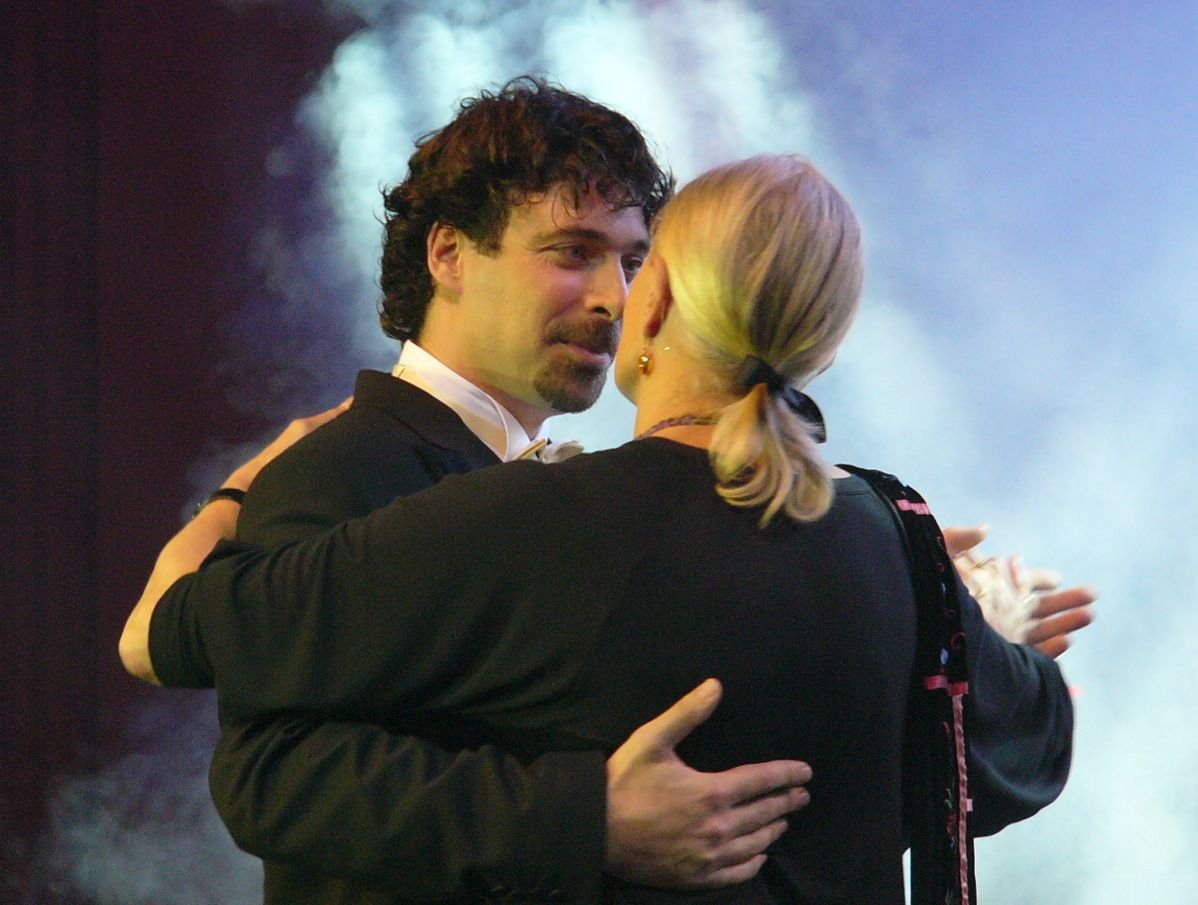 The Canadian Government also supported Gabriel’s project. Diplomats and the new ambassador following Girard’s departure, Marta Moszenska, listened to the company’s concerns and contributed to the company’s efforts to maintain a positive image.

In April 2007, RMGC invited then Ambassador Moszenska to an event and offered security. Lasalle made it clear protection was not necessary, but advised the company to use this as a PR opportunity.

“If you feel that specific security arrangements are required (I do not), I would strongly advise you that you go through local authorities, perhaps mentioning to them that the presence of a few police officers would be useful, and it would make it ‘official’, without any accusations later that the company brought ‘goons’ or other type of private security staff... Again, this is strictly a PR concern on my part, not a security one!”

The company’s PR leverage stretched beyond Romania. Gabriel hired Austrian corporate social responsibility (CSR) adviser Martin Neureiter briefly in 2006. But Neureiter’s link to the company did not end with his brief contract.

In 2007 Gabriel Resources CEO, Alan Hill, received the ICON VIENNA Corporate Social Responsibility award from the Austrian parliament. It was soon revealed Neureiter sat on the jury panel and voted for Hill to win the award.

Once Neureiter’s involvement was noted, the Hungarian Foreign Affairs Ministry and Greenpeace Austria asked for the prize to be withdrawn. Neureiter wrote to Greenpeace Austria, explaining he was able to support Gabriel in good faith, as he knew Hill’s work.

President of the Austrian Parliament, Barbara Prammer, also stepped in and said the awarding of the prize to Gabriel’s CEO reflected negatively on its value.

Prammer added that the “prize nominator and jury member is found to be in conflict of interest due to professional involvement with Gabriel Resources.”

After the event, the president of the Austrian National Council decided in April 2007 that “in the future, no CSR award ceremony can be held at the Austrian Parliament,” and that “more efforts should be made to avoid the involvement of the lobbyists in shaping CSR-projects”.

Meanwhile in Bucharest, Lasalle was rallying his embassy colleagues in Budapest and Vienna to support Hill’s award by talking with Austrian parliament members, according to DFAIT’s releases.

The award was not withdrawn.

Neureiter explained in his right to reply feedback, “the award was never revoked as ... it was seen that the process was ok and therefore no reason was seen to change the vote of the jury. The management of the time dealt with this project in the utmost responsible manner regarding exactly the possible impacts on society and environment.”

He worked in Brussels and Germany to promote the company’s environmental image.

In the past, Schmitz had worked alongside the then US Ambassador to Romania, Mark Gitenstein, for the lobbying firm Mayer Brown LLP. Gitenstein ended his diplomatic mandate to Romania in 2012.

Former US Ambassador to the European Union, Stuart Eizenstat, who has also lobbied for Gabriel Resources’s gold mine development in Romania, worked in the American public service under three administrations, including Clinton.

In his current role within Covington & Burling LLP, he represents the interests of various U.S. and foreign corporations.

Covington & Burling has lobbied for Gabriel in 2009 and 2013, with Eizenstat leading the talks. Washington-based Dutko Worldwide LLC (now Dutko Grayling) has also represented the mining company’s interests in the US in 2009.

Additionally, the US lobbyist registrations attest that Gabriel Resources’s presence in the American corridors of power, lobbying on the “development of a gold mine in Romania” in 2009, 2010 and 2012.

Presented with our findings, the company issued a statement saying “you should not rely on any statements from prior consultants, advisors, employees or contractors of the company as being the current activities, thoughts, ideas or strategies of Gabriel Resources or RMGC."

This article was developed with the support of Journalismfund.eu