At first sight, the valley of Pankisi seems unremarkable. A sleepy collection of houses winds along the pebbled riverbed of the Alazani river, one village after the other linking like pearls on a string.

Slender, veiled women chat beneath a mulberry tree. Cows stand in the middle of a narrow country lane. Men with beards roll by on bicycles.

The scene is peaceful and banal - a sharp contrast to the headlines this valley in the north east of Georgia inspires in the local and foreign press.

If one mentions a trip to the valley in the Georgian capital Tbilisi, it will raise eyebrows among the locals - followed by a half-serious and hesitant question: ‘Isn't it dangerous?’

“These rumors are not true,” 27-year old Asma* tells us with a frown. She is running a guesthouse in Pankisi, and has heard such fears before.

Yes, young men from the valley have gone to fight for the so-called Islamic State (IS, ISIL or ISIS) in Syria and Iraq.

No one knows the exact number, but many young men have gone to nearby Turkey in search for work. And sometimes they don't come back, like 18-year old Beso Kushtanashvili, who was thought by his family to be working in a textile factory and died in armed clashes a few weeks ago - although his full story is still unclear.

According to reports, he is the sixth Georgian national from Pankisi killed in Syria.

For the locals, fates like this are not just personal tragedies, they also taint the name of the valley.

It is not the first time that Pankisi has received international attention: it had a dubious reputation back in the early 2000s, when the Georgian government conducted several 'anti-terror' operations in the valley. The two Chechen wars in the 1990s brought thousands of refugees across the Russian border, among them former independence fighters – a security risk in the eyes of the Georgian government and its close ally, the United States.

Such turmoil has calmed and the villagers try to live a normal life, but the shadow of suspicion is difficult to escape. Asma knows this.

“We are trying to present a different image of Pankisi, our traditions and the beautiful nature all around. But journalists are just interested in what they call 'terrorists'.”

Three years ago Asma left her job as a lawyer in Tbilisi and returned to Pankisi to set up a guesthouse in her family home.

As part of an initiative to build agritourism in Pankisi, she took a training course supported by the Polish Foundation of Intercultural Education in 2007 and found an English business partner to help establish her guesthouse.

Her parents grow their own vegetables, keep cows and turkeys, and cook for the guests. Sunlight blinks through a roof of vine leaves as we sit in the courtyard. A cock crows in the distance. The silhouette of the mountains glows on the horizon.

The majority of Pankisi’s population are Kists, an ethnic tribe with Chechen origins. Around two hundred years ago their ancestors fled from poverty and conflicts across the mountains to Georgia, and have lived here ever since as hunters, farmers or shepherds.

The great 19th century Georgian poet Vasha Pshavela describes the Kists as a vengeful yet honorable people, who were locked in blood feuds with their neighbors but would respect the laws of hospitality, even unto death.

Today relations between Kists and their Georgian neighbors are peaceful, if distant.

“Even though we speak Georgian and we love this country, we still keep our own identity,” says 86 year-old Khaso, the director of the Ethnographic Museum in Duisi, the oldest village of Pankisi.

He sits in the cool office of the museum, where old tools, pottery and a vast sheepskin coat are exhibited between bare, white walls. The kists’ identity, according to Khaso, above all respects the opinions of elders. In critical situations, the rulings of the council of elders is law.

Two years ago, we are told, a young woman disappeared from Duisi in broad daylight, kidnapped by a local police officer who had been courting her.

The act of bride theft is centuries old, mocked in the cult Soviet comedy ‘Kidnapping Caucasian Style’ from 1967.

The council of elders was duly called upon and the families assembled below the walnut trees by the river. The discussion lasted all day, until finally a bride price was agreed. The couple now live in Denmark with their child.

“In Georgia, many people have lost their face - we try to keep it,” Khaso says, just before he turns to walk home, slow and upright. 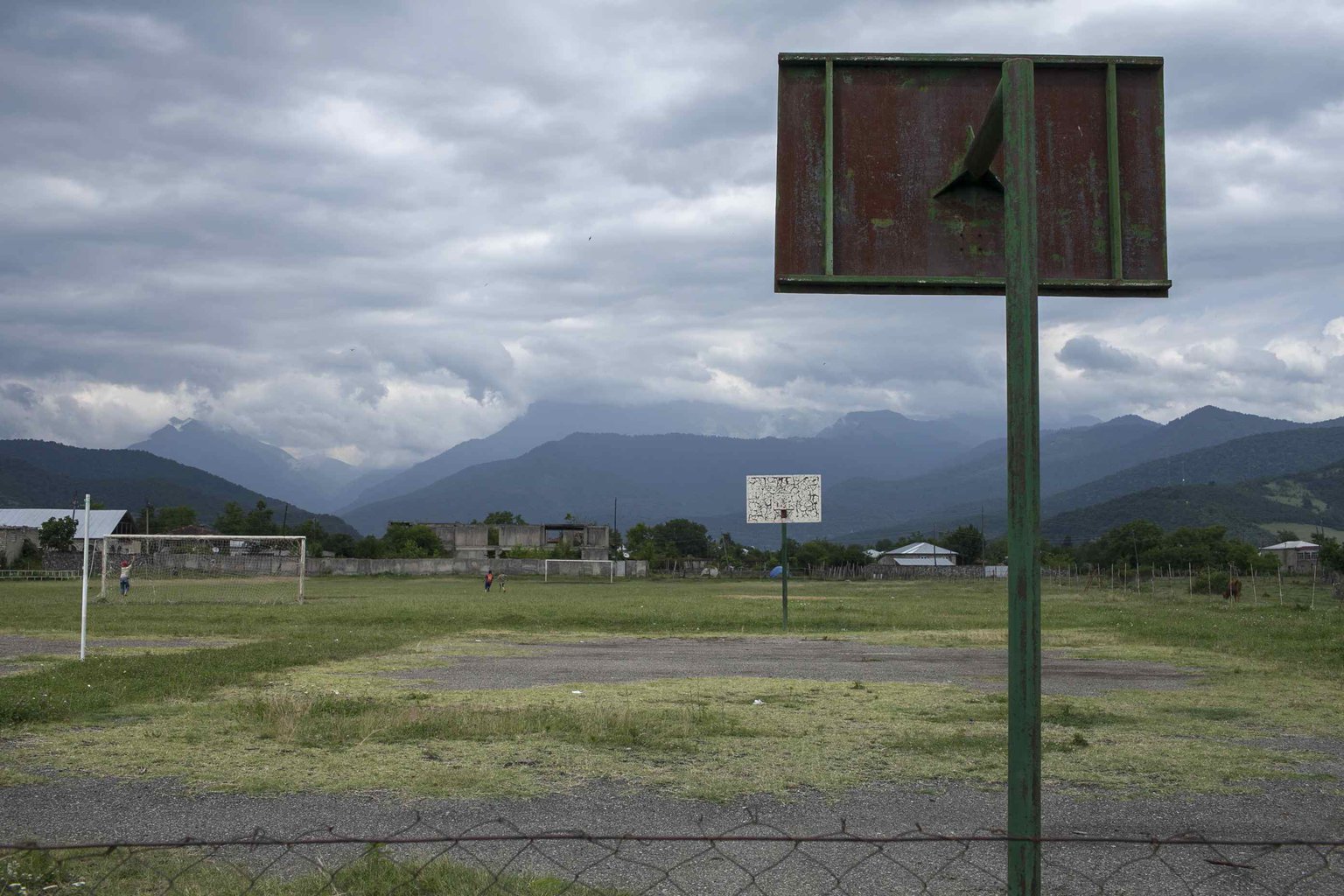 Nature-rich, cash-poor: Duisi with the Caucasian foothills in the background (photo: Tako Robakidze)

“There is peace, but nothing to do”

This 'keeping face', however, is not easy, especially for the younger generation of Pankisi, who struggle to earn a living. On a gravelled alleyway in Duisi we meet 26-year old Mohammed cruising around with his bicycle and his two brothers; arms bristling with strength, feet slowly peddeling.

In the semi-darkness of their wood-paneled living room, the young men sit at a distance from us. Their female cousin laughs, puts her toddler to the side and serves coffee in small porcelain cups, sweet and strong. The three brothers came to Pankisi 12 years ago as refugees from Chechnya.

“Of course,” Mohammed says from the corner. “We have everything here: fresh air, water, good soil, mountains; there is peace.” He shrugs his shoulders. “Only, we have nothing to do.”

With the fall of the Soviet Union came the decline of the agricultural industry in the valley. Towards the end of the 1990s, the two Chechen wars swept a tide of refugees over the border.

At its peak, in 2002, there were up to 7,000 refugees in the small community. Today the population is estimated at 10,000 local Kists and 2,500 former refugees. These pressures were too much for the local economy.

Despite the UN refugee agency (UNHCR)’s attempt at financial relief, the unemployment rate in the valley still reaches 90 per cent. People aren’t starving – jobless statistics do not count the informal economy common in rural areas – but the disintegration of old lifestyle patterns is palpable.

The lack of prospects force many young people to move from the valley to Tbilisi. A large number travel to Turkey in search for work, as was supposed in the case of young Beso Kushtanashvili, or else Europe, or the Chechen capital Grozny.

Among those who stay, a few find jobs in the local agricultural industry or as mountain guides in the slowly developing tourist industry.

Increasingly, the red brick mosque in the centre of Duisi has become a popular meeting place for young men in search of meaning.

Those who come to the mosque find an alternative source of affirmation in what is frequently referred to as the “Wahhabi” brand of Islam.

Wahhabism is an influential and conservative interpretation of the Qur'an that has often been cited by commentators as the ideology of Islamic extremists. Since the 1990s it has supposedly spread throughout Pankisi, supported by sponsors from Saudi Arabia, where Wahhabism is the state religion.

The Kists, in contrast to their Christian Georgian neighbors, are traditionally Muslim. During the Soviet Union, the Kists practiced a liberal Islam, influenced by the Sufi tradition.

The new 'face' of Wahhabism helps young men to deal with their failure in terms of the Kists' traditional gender roles. Society expects young men to provide for their whole family. When there are no jobs available, they spend more time in the mosque, some of which are built from Saudi money - and can be tempted by radicalism. 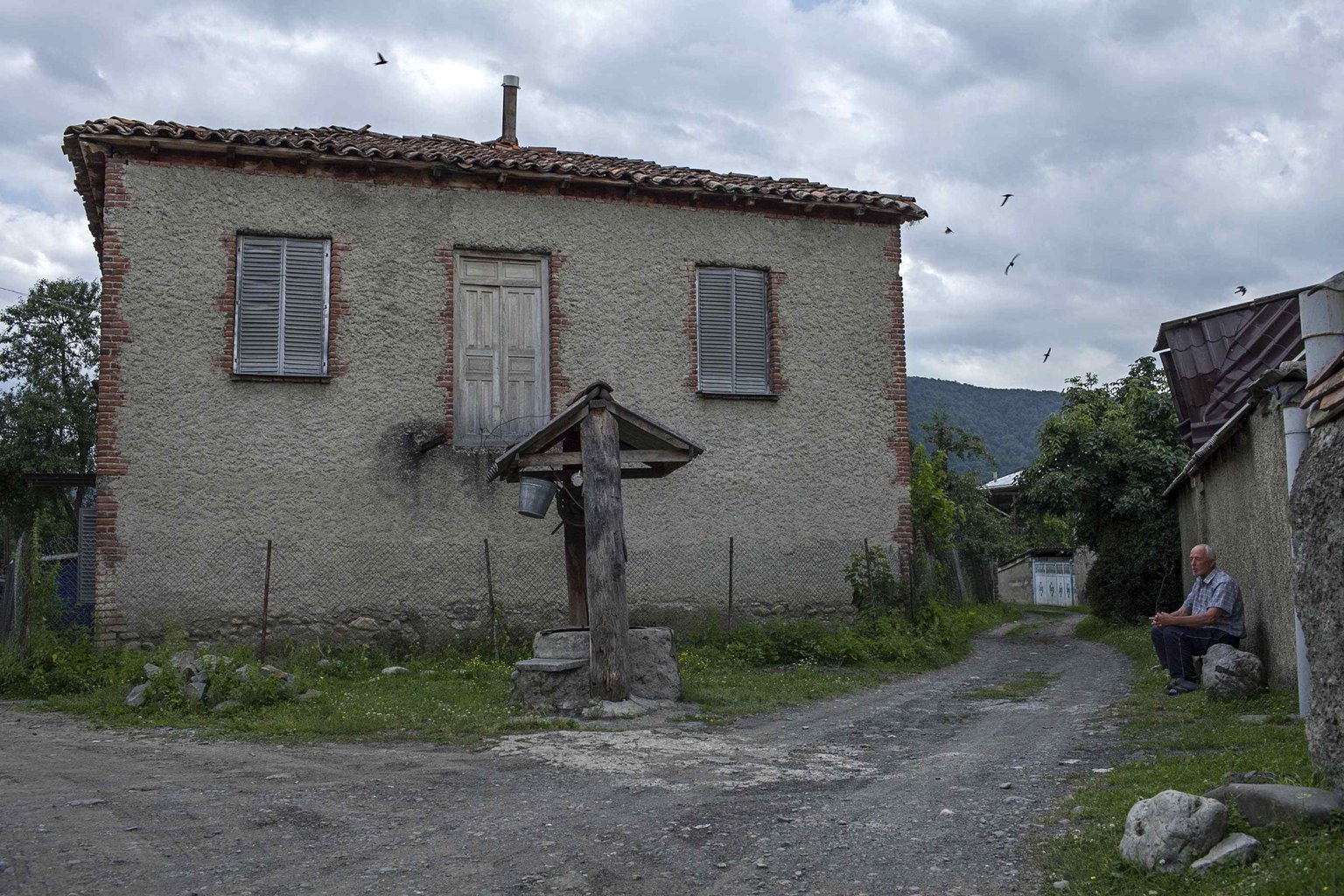 Duisi alleyway: With 90 per cent unemployment, Pankisi sees its young leave for Europe and the Middle East (Photo: Tako Robakidze)

Moreover, the Kists’ close association with the Chechen cause arguably adds another motivation for joining the fighting in Syria.

As far back as the 1990s, Islam has taken on a new role for many Chechens. The fervent nationalism for Chechen independence from Russia at the time was increasingly fueled by a strict Wahhabism. The fight for Chechen autonomy became a fight against infidels, a Jihad.

But next to religious and nationalist fervour, there is a mundane reason which inspires young men to join the army of Islamic warriors: cash. It is not clear how much or whether those fighters get paid at all, but the word on the street certainly suggests it.

Even the most famous of IS fighters from Pankisi, the 28-year old, red-bearded commander Omar Al-Shashani, 'the Chechen', appears to have followed this calling only after he failed to find employment at home.

The son of a Christian father and a Muslim mother, he fought for the Georgian army in the 2008 conflict with Russia. When he was dismissed from the army due to tuberculosis, he returned to Pankisi, but was unable to find work.

After a prison stint for arms smuggling, he decided to leave for Syria, where he quickly ascended the ranks of the IS forces and is now at large as one of the most prominent faces aiming to build an Islamic Caliphate.

His story shows the tragic failure of the Georgian state and society to deal with the struggle of young Kists. The attention of both government and media focuses on the sensational wrongdoings of the few, rather than the deeper sources of the general problem.

Instead of stepping up its efforts to support the region of Pankisi in its economic development, the Georgian government has reportedly offered to host a training camp for anti-IS fighters as “counterterrorism training center for any nationality”, as Georgian ambassador in the US, Archil Gegeshidze, told the magazine Foreign Policy.

Although the Georgian State Security and Crisis Management Council later denied such plans, foreign minister Maja Panjikidze restated the countries intention to fully support “efforts of the coalition to defeat ISIL and to bring peace in the region.”

Meanwhile, the Kist community in Pankisi is struggling to improve their situation on their own, by showing a different side of their valley. The foreign visitors who venture to these foothills find a whole programme to gain insights into the culture of the Kists, be it visiting shepherds, going on expeditions to the mountains or listening to the female singing ensemble, which still practices traditional Sufi chants.

We don't know into what future he is heading, but we have learned that there is no single path for Pankisi, no single story to fit into one line.

*Name changed by the editor
Opening picture: A family in Duisi, Pankisi, considering moving to Grozny in Chechnya for work (all photos copyright: Tako Robakidze)