For an info-graphic illustration of the Armenian Government's close ties to fishy business, click here

Armenia is not an easy country for travellers.

Every journey through this undulating terrain means rumble, bump, clatter and bang across a half-made, half-wrecked path of dips and curves, obstacles and potholes.

To reach the village of Sayat Nova, only 22 kilometers from the capital Yerevan, is a perilous route without an SUV.

So much so that the first words a resident says to a visitor is not: “Welcome, stranger” or “How are you?” or “Where are you from?”, but “Did you make it alright?”

In the village square, old men congregate under the shade of a tree, rolling dice and moving counters across a backgammon board.

They have lost hope that the Government will fix the roads to give them a secure year-round connection to markets and towns. This they can live with.

But for the last three years another of their vital resources has been at risk - their water supply is vanishing.

Located in the Ararat Valley, Sayat Nova is on a low lying stretch of land endowed with favorable conditions for growing crops. The weather is dry and hot with May to October temperatures averaging 24 to 26 Celsius, while in July and August it can reach 42 degrees.

These are perfect conditions for apricots, grapes, peaches, watermelon, tomatoes and eggplant - if there is a liquid resource.

76 year-old Hrach Matevosyan lives in the center of the village where artesian well water used to freely flow.

For many years his family not only used the water for drinking, but also irrigated a small garden plot. Today his well has dried up and his garden risks ruination.

Across the village, other residents show us the courtyards, where their wells are covered in weeds.

They estimate that only a quarter of the wells in the city remain.

Although this water is for their farms, there is no other potable water near their homes, so they must drink straight from the underground aquifers.

For four years this water supply has been drying up. Throughout the valley, other villages experience a similar trend.

This is a tragedy that is affecting the village’s demographic and its future survival.

Agriculture is among the only sources of jobs in the region and, without any other forms of income, many young people emigrate to work in Russia.

Garnik Hayrapetyan, a 62 year-old village resident of Sayat Nova, says: “Look around and you’ll see the old ones are the only ones left - the young people are leaving.”

Exploitation from the top

During the same time the Ararat Valley has seen a boom in modern fish farming operations.

These businesses use vast quantities of underground water to help raise thousands of tons of sturgeon, trout and whitefish.

Five years ago local entrepreneurs saw fish-farming as a high-margin business. Many of these owners are connected to the Parliament in Yerevan or even members of the elected chamber themselves.

Five farms, not all of which are connected to the authorities, are now operating in Sayat Nova.

The fear among the people is that these businesses are sucking the life out of the sustainable countryside to secure a quick return.

“The agricultural sector of the Ararat Valley is at risk,” he said in 2012. “The water reserves we now have are quickly being exhausted.”

With free-flowing wells now drying up, villagers must pump water from a deeper source, causing the electricity bills to rocket and cutting into any profits they may hope to make from the sale of vegetables.

Fish farming operations drill holes very deep - at around 200 meters with thick pipes to suck the water out.

Meanwhile the villagers spike at around 100 meters, a lower level, which means large quantities flow to the fish farms, while little is left to reach the village wells.

“In a few years it’s possible the village will be completely without water,” says Razmik Alaverdyan, the mayor of Sayat Nova.

Three years ago leading experts warned the Government about the potential desertification of Armenia’s rural heartland by 2020.

Back then Hovik Aghinyan, Chief Hydro-Geologist in the Ministry of the Environment, told local investigative publication Hetq that artesian waters of the Ararat Valley were used at unsustainable rates.

“If the current rates of usage continue, wells may no longer flow in ten years,” he said at the time. “Our future generations are at risk since it is the only long-term quality water reserve that can be used to supply potable water.”

Vladimir Movsisyan, who heads a Presidential commission to help preserve Armenia’s largest freshwater lake, Sevan, says that while the renewable artesian water reserves of the Ararat Valley are 1.3 billion cubic meters, the Ministry of the Environment has allowed 1.5 billion cubic meters to be tapped.

This over-exploitation, according to the expert, has lead to over one sixth of the Ararat Valley’s 638 artesian wells running dry.

Movsisyan calls the Ministry of the Environment “irresponsible” for allowing this to happen.

The result is that 6,200 hectares of irrigable land is without water.

Therefore desperate farmers have turned to draining Lake Sevan, the legendary ‘Sea of Armenia’ famed worldwide for its tasty but endangered Sevan Trout. 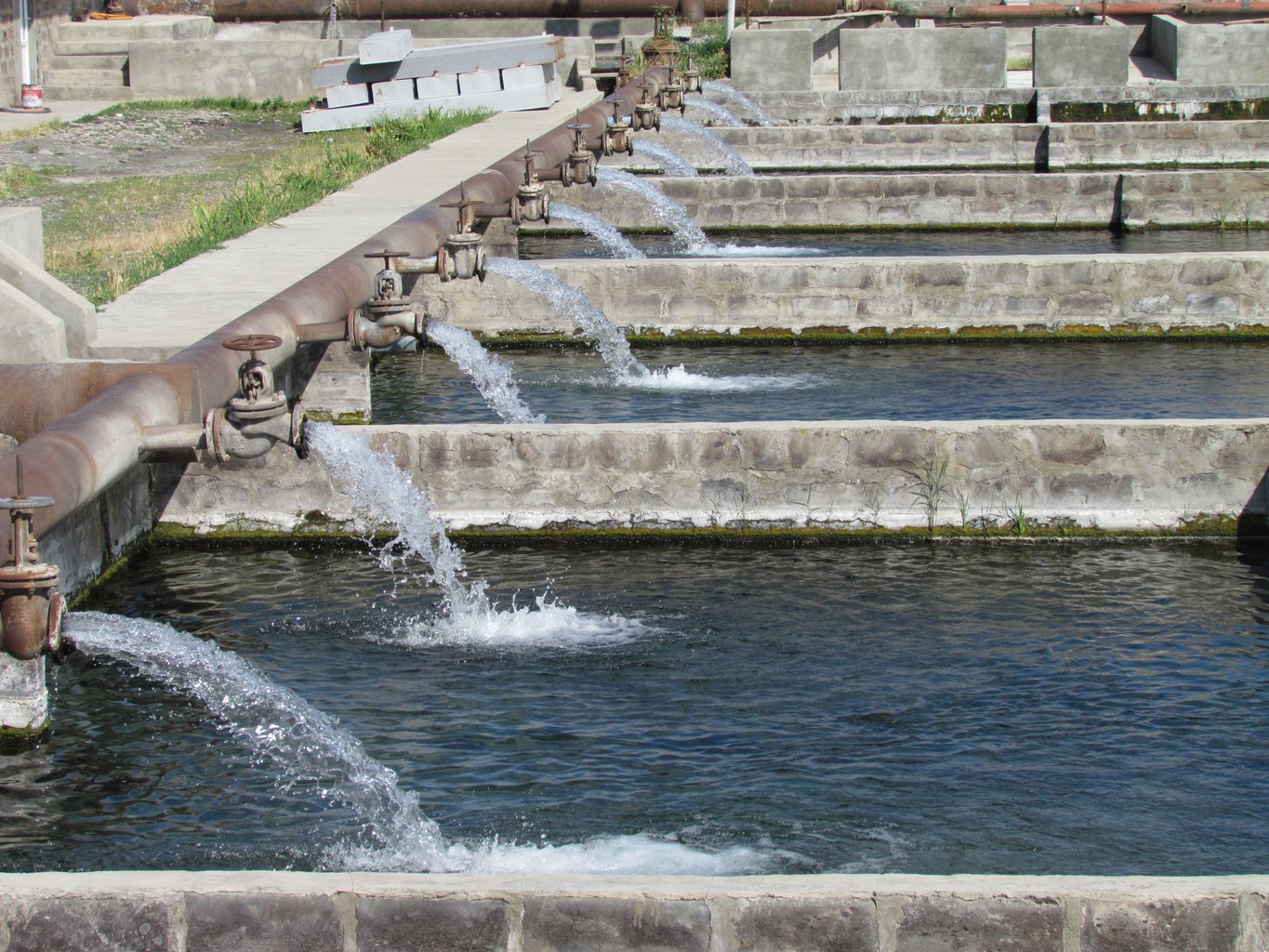 Soaking up the resources, playing with the laws: Armenian fish farms

Fish-farms have been draining water from the ground at an illegal rate, experts fear.

Since 2010, farms can only use a quota of water from underground sources. So the Ministry of Environment can check up on this figure, each farming operation must install a water meter.

However our investigation reveals that as operators grow and their farms expand, those installing the meters have found tricks to show a lower amount of water usage, while some have not even installed the meters.

Sayat Nova-based company Masis Fish, which raises a sturgeon-type fish, is a huge water consumer. One of the owners of Masis Fish is Samvel Haroutyunyan, the former Cadastre Chief of the town of Masis.

He owns 70 per cent of the firm's stocks, while another 30 per cent belongs to Vagharshak Sargsyan, the son of Qadjik Sargsyan, head of the Ararat Territorial Department of Forest Control Division of the State Environmental Inspectorate.

At Masis Fish, water meters are installed on the pipes.

But photographs (left) we took at the location farm show a water meter is not installed on the large main flow pipe, only on a smaller auxiliary pipe. This indicates that large quantities of water flow through the unmonitored channel.

Yerevan offers permits to allow fish farms to bore holes into the ground to tap into the depleting water resources.

But it appears farms - including those connected to the Parliament itself - are flouting this rule and boring without approval.

In October 2010, when we visited the fish farm owned by Armenian MP Samvel Aleksanyan, the manager Movses Arakelyan told us that the operation tapped water from six or seven bore holes.

Afterwards, the Ministry of the Environment published a list of fish farming operations on its website, showing that Arakelyan had a permit for just one well.

MP Aleksanyan also owns the Yerevan City chain of supermarkets, which sell the fish he raises.

However Arakelyan says that the fish trade has tumbled this year, and points to labor force migration as the cause. So far this year the number of work emigrants from Armenia has risen by 32 per cent on 2012’s figures.

The customer base is eroding. Although the Yerevan City chain continues to grow, fish sales have dropped by up to 40 per cent.

“There are no other commodities in Armenia as inexpensive as fish,” says Arakelyan.

During the Soviet period, Armenian fish farms raised 8,000 tons of carp and whitefish (sik), and 4,000 tons of lake trout (ishkhan) every year for consumers in the USSR, especially from Russia.

At that time, the farms used water from Lake Sevan and local rivers. Following Armenian independence in 1991, fish farms tapped into underground reserves of freshwater because ishkhan thrive in such conditions. Today, Armenia mostly produces ishkhan, sturgeon and carp.

280 of the 319 fish farms operating in Armenia today are located in the Ararat Valley - 99 per cent of these are located on artesian wells.

While experts have raised the alarm regarding the scarcity of water, fish farming operations continue to expand. The amount of fish which Armenia exports is growing, with Russia the number one customer, buying up one sixth of the product.

However this enthusiasm for new farms risks over-using the water supplies not only for villages, but for the industry itself.

Armenian Prime Minister Tigran Sargsyan has warned this over-exploitation could force a state of emergency.

“We face a very huge water cost problem and it can create a tragic situation in the Ararat Valley,” he said in July. “There are hundreds of fish farms there that will also face a huge problem tomorrow. The water resources necessary for these enterprises to develop will no longer exist.”

He stated that if the Government wishes to maintain a normal supply of irrigable water, it will need to tap an additional 150 million cubic meters of water from Lake Sevan, which is already suffering from mass-depletion.

The only way to expand the sector is to implement the European model of water recirculation, which means recycling the water resources. This could reduce the number of wells by 60 per cent.

“The fish farms, popping up like mushrooms in the Ararat Valley must change over to a [recycling] system,” says Vladimir Movsisyan, head of the Lake Sevan commission. “The amounts of underground water used will drop by a factor of two to three.”

But this is too expensive for farm investors to implement at a time when a glut in production means fish prices are plummeting.

The industry may be reaching the downward curve of a classic boom and bust scenario.

In 2011, when PM Sargsyan participated in the installation of water meters in Sipanik, he stated that this move was necessary to regulate the sector - given that scores of communities had been deprived of potable and irrigation water.

In 2011, Sargsyan argued that 2,000 of the 3,000 wells were illegal and that the Government was not properly calculating water consumption rates.

Since this revelation that over two thirds of wells are outside of the law, we wanted to find out what the state has done to combat this crime in fish farms.

Responding to our inquiry as to whether fish farming operations are monitored and inspected, the Armenian Ministry of the Environment told us forty fish farms were inspected in 2011.

As punishment, the Ministry gave out a total amount of fines worth 5,550 USD - about one-and-a-half times the annual salary for an average Armenian. The next year the Ministry found 25 similar violations, resulting in 4,000 USD of fines.

While the prosecution of illegal practices in fish-farming is low, the extent of the damage to the water reserves of the Ararat Valley is unknown.

The last time a study was conducted of the reserves was in 1984, by the State Commission of Reserves, based in Moscow. The Armenian government has yet to allocate funds for a new study.

In addition, global warming is likely to pose a further challenge for Armenia’s agriculture.

According to a study conducted by United Nations in 2009 regarding the impact of climate change on Armenia’s socio-economic situation, temperatures will rise in Armenia over the next one hundred years and rainfall will decrease by nine per cent.

However this figure triples to 30 per cent in the Ararat Valley.

The fear is that a combination of over-use of underground water coupled with climate change could pose a desertification risk for Armenia’s precious farmland.