Michael Bird, Andrei Cotrut / 14 March 2016
A controversial supplier of electricty from the frozen conflict zone of Transnistria to Moldova has an ownership structure linked to companies involved in a "billion dollar theft" from Moldova''s banking system in 2014 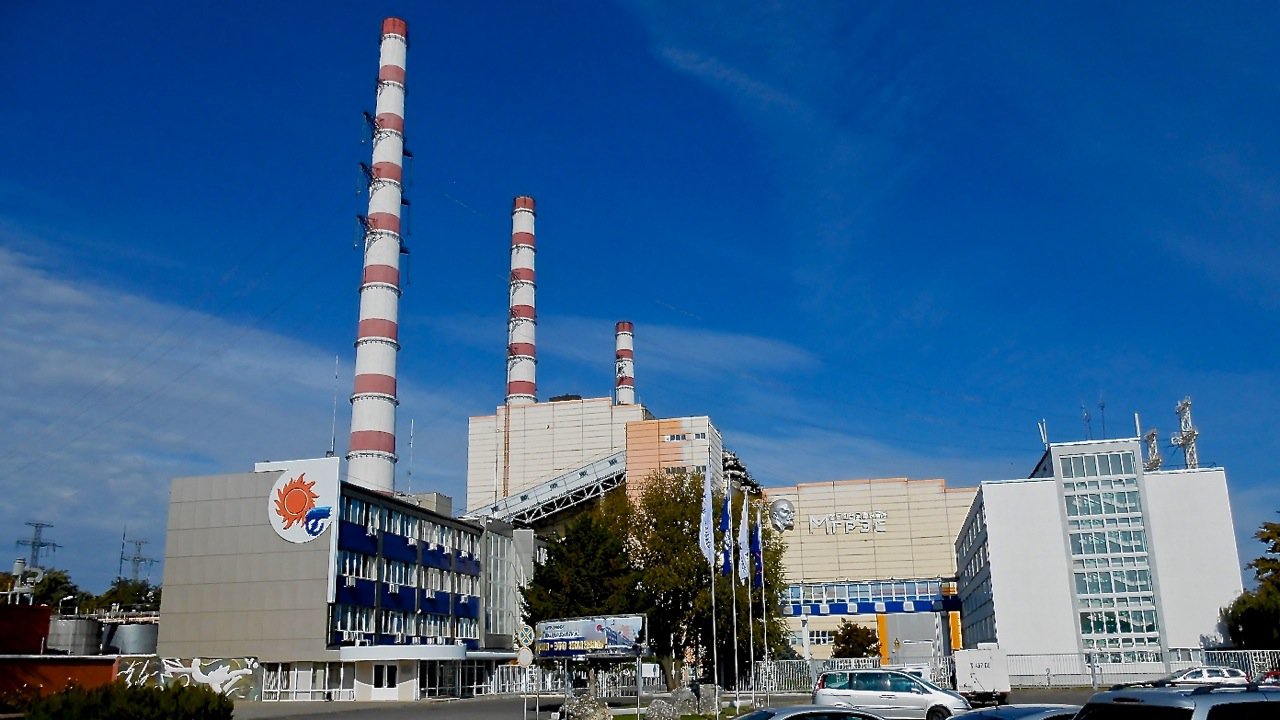 A Moldovan energy intermediary company Energokapital has a complex series of off-shore owners connected to 2014’s “theft” of a billion dollars from the collapse of three Moldovan banks, The Black Sea can reveal.

The ex-Soviet country, rocked by angry protests and multiple changes of Government over the last year, is powered by a chain of firms that cross its frozen conflict zone of Transnistria and leads to China, Scotland and the off-shore haven of The Seychelles.

Kuchurgan is a Soviet-era facility in the breakaway republic of Transnistria, which is bank-rolled by Russia and hosts Russia’s 14th Army, but is unrecognized as a state.

Moldova is more than 80 per cent dependent on this power station, giving the frozen conflict zone a monopoly over Moldova’s energy supply.

Once it has overseen the passage of electricity from Kuchurgan, Energokapital sells the power on to state-owned Moldovan company, Energocom.

However the price for electricity has never been based on a cost structure, as Transnistria does not pay for its gas.

Because Energokapital is likely receiving its raw material for free, it only pays for the costs of processing gas into electricity.

This is where the shocking figures start to appear.

The difference between these processing costs and the amount Moldova pays for the electricity reaches 400 per cent, according to Moldovan independent energy analyst Sergiu Tofilat.

This massive difference prompts him to fear that someone is siphoning off this cash.

The complex web of Energokapital’s off-shore owners includes Hong Kong, Edinburgh, the Seychelles and possibly Belize, giving credence to the fear that millions of dollars of cash is ending up in the pockets of Moldovan, Russian and Transnistrian officials - or individuals connected to these administrations.

Link to the theft of the century

Energokapital’s ownership has a similar structure and overlapping connections with consultants and nominee directors to the scheme that led to the collapse of the three Moldovan banks in 2014 and the disappearance of one billion dollars from the Moldovan banking system.

Firstly, this leads to China.

A director of the company is Wai Lap Shum, who lives in a flat in a massive tower block - Kui Fat Building - in Hong Kong. 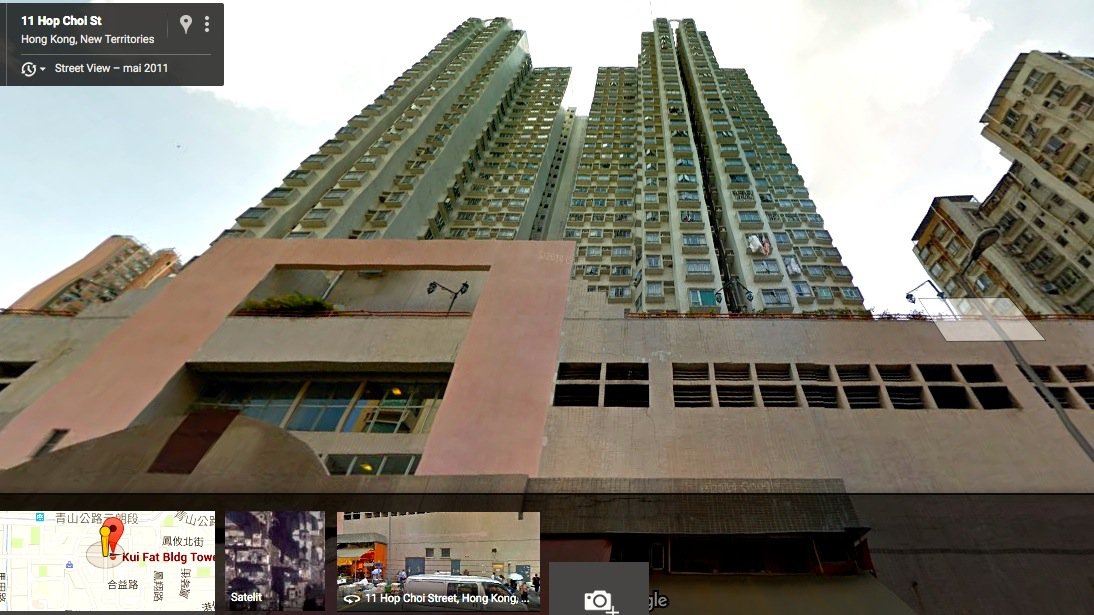 Shum is suspected of being a nominee director, tasked to conceal the real identity of the company owner.

Set up in 2013, Ornamental Art is located at the same address as MB Consultants - a glass and steel business centre wedged between two residential tower blocks.

MB Consultants is a Hong Kong based business that targets Russian-speaking clients.

In 2009, this Hong Kong location was the office run by Moscow-based Global Wealth Management Center Ltd, which has established many off-shore companies in the British Virgin Islands, according to documents from the International Consortium of Investigative Journalists (ICIJ).

Chinoiserie on the Leith

But who is behind Ornamental Art?

One of its shareholders is an Edinburgh-based company called Energy Assets Development LP.

This company has no evident business activity in Scotland.

It was set up in 2012 as a ‘general trading’ company. Its partners are two companies based in the Seychelles.

This is the same address as Fortuna United Ltd, a company implicated in the ‘theft of a billion scandal’ involving the fall of three Moldovan banks.

Fortuna United Ltd is owed around 825 million Euro by the collapsed Moldovan bank Banca Sociala, according to a document from US consultancy Kroll, made public by the Moldovan Parliamentary President Andrian Candu.

The two partners of Fortuna United are also based in the Seychelles.

Both Fortuna United Ltd and Energy Assets Development are thought to be shell companies, registered in the UK, and used to disguise the real owners. 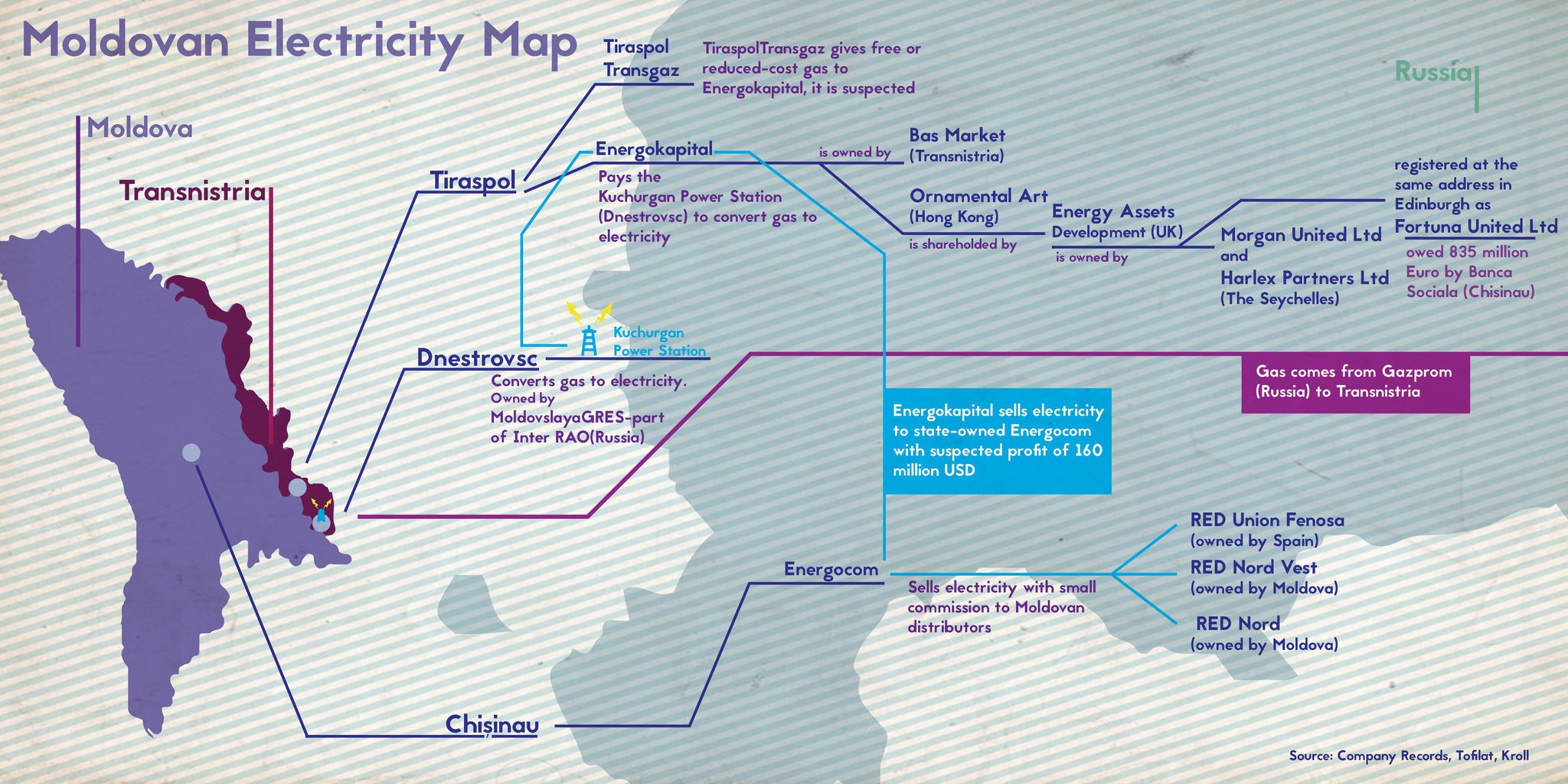 A business consultant connected to both Fortuna and Energy Assets Development is Edinburgh-based Cypriot Marios Papantoniou.

He has been director of Manitoba Management, which bought 4.98 per cent of Moldova’s Unibank on 17 August 2012 in part of a chain of linked events which led to the bank’s collapse.

He has also been director of law firm Lawson’s & Co, which presented the document to set up Energy Assets Development LP.

Papantoniou has claimed there were inaccuracies in the Kroll report and that he may sue the US-consultancy firm. [Papantoniou did not provide us with any further clarification on these ‘inaccuracies’ by the time we went to press].

Hundreds of companies are using similar schemes to disguise the real owners - and many are suspected of using this structure to launder money.

Due to a legal loophole, Scottish companies are not obliged to disclose their annual accounts or the names of the people running them.

The UK also does not hold nominee directors responsible for the companies they front.

“Nominees are, in essence, renting out their name, and in doing so, providing the anonymity that corrupt officials, tax evaders and other criminals require to move dirty money around the world,” states a report by NGO Global Witness from 2012.

Thousands of suspected ‘shell companies’ have registered in Scotland under this scheme - with their partners often based in the Marshall Islands, British Virgin Islands, Cayman Islands, Belize and the Seychelles - states with non-transparent company laws.

The Kroll report implicated Moldovan businessman and mayor of the town of Orhei, Ilan Shor, as the link between the ‘shell’ companies shifting money between Moldovan banks until they collapsed.

But Shor may not be involved in this scheme, says one offshore analyst.

“As far as I've seen similar gigs in Moldova, Russia and Ukraine, it could be that the bank theft and this are two separate organizations and groups who just use the services of the same money-laundering match-makers,” he says.

In late 2014, Moldova bought around 80 per cent of its electricity from abroad - half from Ukraine, and the other half from Transnistria’s Kuchurgan power station.

Kuchurgan is 100 per cent owned by massive Russian energy holding company Inter RAO UES, which has a monopoly on import and export of electricity in Russia. The power station also provides electricity to Transnistria.

Due to its civil war, Ukraine stopped providing power to Moldova, which became dependent on electricity from Kuchurgan.

At this point, the company Energokapital appears from nowhere.

The gas comes from Russia's Gazprom and is suspected of being a form of “charity" for the Russian-backed region of Transnistria.

Gazprom itself cannot conclude agreements with TiraspolTransgaz as this company is registered in a state unrecognized by any sovereign country - including Russia.

The gas is delivered to Moldovan gas company Moldovagaz, where Gazprom has a 50 per cent stake, and all the debts are registered to the Moldovan firm.

According to Gazprom financial statements, currently the gas debt of Moldovagaz exceeds five billion US dollars.

Energokapital then sells the electricity to Moldovan state-owned operator Energocom.

However Energokapital does not possess any power generation facilities nor does it interact with the energy at any point.

More data. Beware, this is complex. Bear with us - it's revealing

The price Energokapital sold to Energocom was 6.775 dollarcents per Kilowatt per hour (kWh) until March 2016.

In 2014, Moldova annually imported 3.2 billion kWh of electricity from Transnistria, which means that Energokapital could have a gross profit of over 160 million USD, according to analyst Sergiu Tofilat.

Therefore this intermediary company could be pocketing up to 75 per cent of its sales as ‘profit’ without taking in even a whiff of gas.

There are three possibilities about where this money ends up.

Tofilat suspects that 160 million USD could have been transferred to offshore companies.

Another possibility is that Energokapital buys gas from TiraspolTransgaz at a symbolic price and part of money is transferred to Transnistrian budget, while the other part is transferred offshore.

A third possibility is that the entire amount goes to TiraspolTransgaz, and is used by separatist authorities to cover its budget deficit. [Energokapital did not respond to our requests for details on its purchase of gas from TiraspolTransgaz].

But due to the complex web of shadow owners of companies connected to Energokapital, the suspicion is that this is a way for senior politicians to make money.

One analyst close to the Government tells us this scheme would need “one person in the [Moldovan capital] Chisinau Government and another in the Tiraspol Government” to operate. 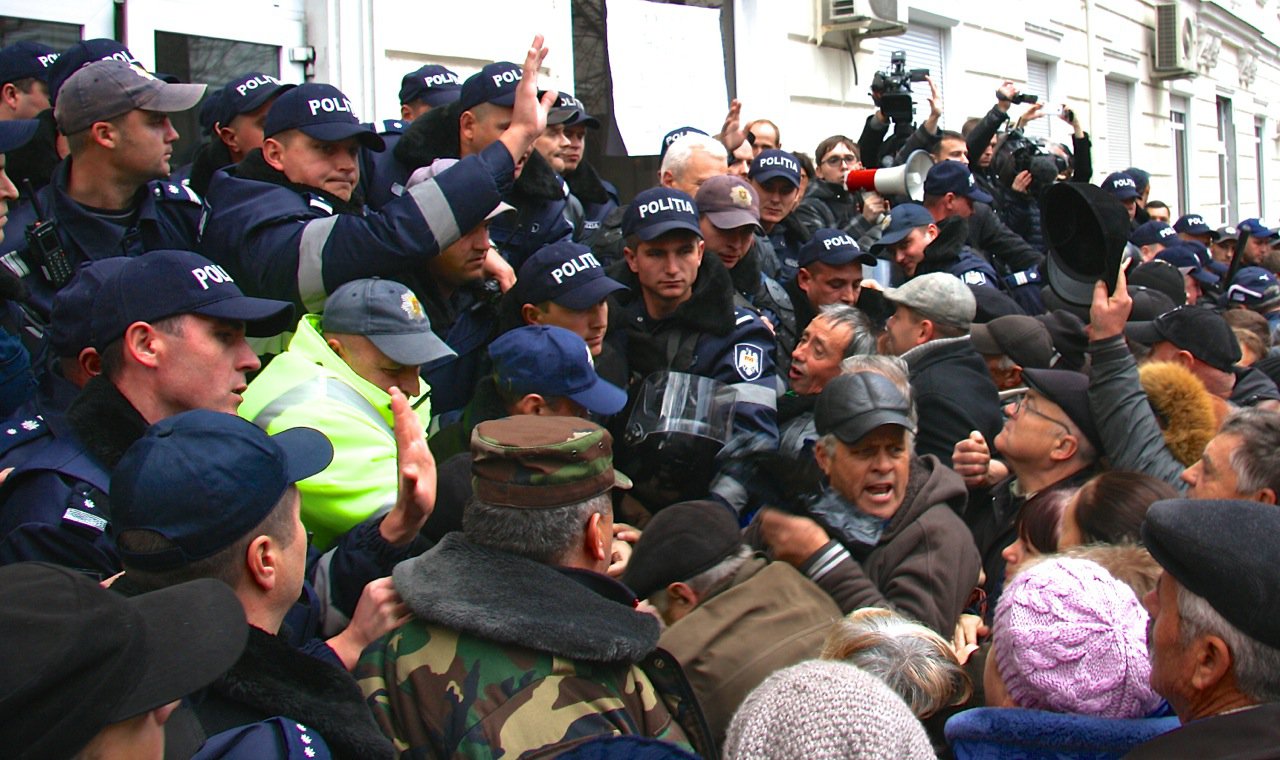 "Down with energy prices!" chant protestors in Chisinau, Moldova, as they struggle with cops outside energy regulator in November 2015 (picture: Michael Bird)

Chisinau has witnessed massive protests against the Government over the last year. Tens of thousands have taken to the streets and camped outside the Parliament and Government buildings.

Much of this anger was centered on rising energy prices - and the Government has been frantically searching for ways to diffuse this tension.

However this attempt to curb protests does not involve tearing up the controversial deal with Energokapital.

But with some revealing modifications.

“[Energokapital] offered not only the best price, but also guarantees they could complete and fulfil the contractual obligations,” the Moldovan Ministry of Economy said in a statement. “In the conditions of the new prices of procuring electric energy, the Ministry of Economy considers that it has created the necessary premises for dropping the energy tariffs for the final consumers.”

Moldovan Prime Minister Pavel Filip said this could mean a fall of over “ten per cent” due to the new deal.

One reason for this drop is the price of natural gas - which has fallen substantially in the last two years.

At least two Ukrainian companies were also bidding to sell electricity to Moldova, and Energokapital would have needed a new price to undercut potential competition.

Such a massive drop also gives further credence to the theory that Energokapital is not paying for the gas.

One analyst close to the Government tells us: “The Ministry of Economy in Chisinau - which oversees energy - has an interest in keeping this chain with Energokapital active.”

A second shareholder in Energokapital is Bas Market, a company registered in Tiraspol, the capital of the breakaway region of Transnistria.

According to the website openpmr.info, Bas Market’s shareholders are Yuri Dzetsul, a close friend of President of Transnistria Yevgheny Shevchuk, and a company called Intercom Management, which is based in Belize.

In 2011, Dzetsul became the founder and director of a network of petrol stations called "GazTop", which the portal argues actually belonged to Yevgeny Shevchuk.

Although this information has been widely distributed throughout the media, we could not confirm its accuracy with first-hand documentation.