E-mails prove that Bensouda asked the advice of Ocampo on cases, and even shared confidential ICC document with him

An investigation into two suspended ICC employees, who shared confidential documents and lobbied for Ocampo, will be managed by the ICC’s Independent Oversight Mechanism, a body which Ocampo - when prosecutor - handicapped to avoid scrutiny of ICC employees

If the oversight body had been active during his tenure, Ocampo would have been required to disclose financial interests, such as his offshore accounts in Panama and the British Virgin Islands

The Chief Prosecutor at the International Criminal Court, Fatou Bensouda, has suspended two employees and announced an internal investigation into allegations made by European Investigative Collaborations (EIC) that workers secretly lobbied on behalf of her predecessor, former ICC prosecutor Luis Moreno Ocampo.

The two ICC employees in question, Florence Olara, a press officer, and Jennifer Schense, an ‎International Cooperation Adviser, were suspended in the last week, and will now be investigated by the court's Independent Oversight Mechanism (IOM).

This is an internal body designed to monitor the activities of the Court's staff, and will examine evidence the pair aided Ocampo from within the Court to lobby for influence and, more seriously, supplied him with inside information after he had left the Court and was working in the private sector.

Bensouda's announcement is in direct response to EIC’s #CourtSecrets project, based on a collection of leaked documents related to Ocampo’s work, obtained by French media group MediaPart and analysed by EIC's media partners.

The leak revealed that while Ocampo was still in his public position of prosecutor, financed by the 124 member countries of the ICC, he controlled undeclared shell companies in tax havens Panama and the British Virgin Islands, and shared confidential documents and information with celebrities and billionaires, such as Angelina Jolie, George Clooney and the wife of EBay co-founder, Pierre Omidyar

Once Ocampo left his position, in 2012, he set up a consultancy firm which engaged in questionable behaviour, lobbying for a Libyan oil millionaire who was close to the Gaddafi regime, as well as interfering in and undermining his previous cases, with payments passed to one of the ICC employees to help his private client, and receiving insider information from the Court.

The scandal - dubbed 'Ocampogate' by those within the ICC - may soon envelope Bensouda and other senior officials.

When EIC's reports were first published two weeks ago, Bensouda released statements designed to draw a line under the scandal. She repeated on several occasions that she had “sought no advice from [Ocampo], had not communicated with him, or worked together” since she took over as ICC Chief Prosecutor in 2012.

The internal documents present a different picture. Bensouda often talked with Ocampo about cases, sharing information, seeking his advice, and in one instance even sending him an internal document, even though he was active as a private consultant. These contacts with Ocampo could be in violation of the ICC’s Code of Conduct, which she herself implemented in 2013 and which prohibits the transmission of internal information to third parties. 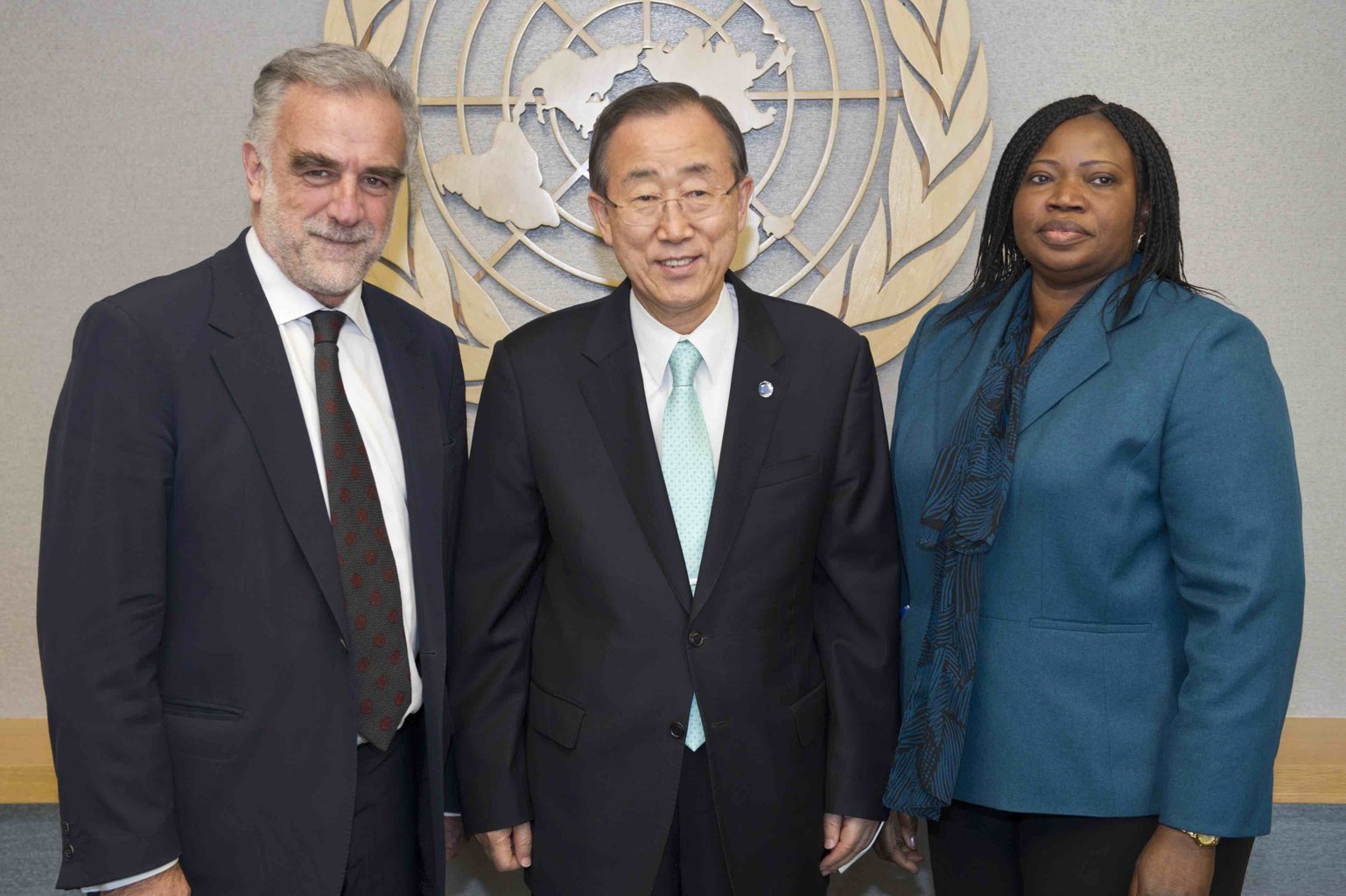 Fatou Bensouda, a 56 year-old lawyer from Gambia, rose to the position of ICC Chief Prosecutor following Ocampo's departure in summer 2012, after acting as his deputy since 2004.

As well as the prestige and power afforded by the position, she also inherited all of Ocampo's problematic cases.

An Argentine lawyer famed for taking on his country’s former Junta, Ocampo had begun many investigations during his eight year tenure at the ICC, but few were resolved successfully.

Time and again, the Argentine faced accusations that he was sloppy in choosing his targets and conducting his investigations. In 2011 he obtained an arrest warrant against the current Kenyan President Uhuru Kenyatta, and other government and opposition officials, following accusations that Kenyatta orchestrated police violence against civilians that resulted in over a thousand deaths. But a lack of evidence and witnesses, as well as political developments in Kenya, forced Bensouda to drop the trial in 2015.

The e-mails show that Bensouda contacted Ocampo several times about the Kenya case.

The first time was six months into her new appointment, in February 2013, when Ocampo had a request for his protege:

“Can we talk? I'm worried about the Kenya case,” he said.

Bensouda responded positively. “Thank you, Luis. I have tried several times to reach you. I'd like to talk to you before I make a decision.”

Shortly after, Bensouda announced that she was ending proceedings against one of Kenyatta's associates. They continued to discuss the proceedings until they fell apart completely in 2015.

This is not the only instance. While Ocampo only offered advice on Kenya, at another time he was more directly involved.

Shortly after his retirement, Ocampo began mediating between the Colombian government and the Farc rebels, which had been in a bloody war for over 40 years. At the same time, the International Criminal Court investigated both sides for evidence of war crimes.

On 23 July 2013, Ocampo wrote to Bensouda: “I need to understand your view of Colombia. I'll go there in September.”

Remarkably, a few weeks later, Bensouda informed Ocampo, via her private email, that she had sent a letter to the President of the Colombian Constitutional Court, making her position on the peace negotiations in Colombia clear. She enclosed the letter in the mail to Ocampo.

Another time, Ocampo tried to get his clients an audience with Bensouda. In 2015, he was privately helping the Iraqi persecuted minority, the Yezidis, and organisations in support of their cause, to start a case at the ICC against members of ISIS, who had been abducting and raping Yezidi women and murdering Yezidi men.

He could not call the court directly, he said, because of his role as its former prosecutor.

So how was he able to help? On 3 September, 2015, he made contact with Bensouda on his clients' behalf. “Hello Fatou,” he e-mailed. “Can we talk? I would like to explain to you the Yazidi case and ask you what to do about it.”

“Dear Luis,” she replied “I hope you are well. Of course we can talk. Perhaps Saturday evening will be good for you. You can call me from 8.00pm my time. Have a nice weekend and looking forward to speaking with you.”

A few weeks later, on 24 September 2015, Bensouda met with Yezidi emissaries at The Hague to discuss a possible criminal investigation. Bensouda had asked to keep the meeting secret, but Ocampo advised his associates to announce a press conference, which was “the most important thing”.

The event gained press coverage, which angered Bensouda, who did not want to raise expectations that a case could be brought against ISIS, especially as their activity was based in Iraq and Syria, two countries who were not signed up to the ICC.

After the Yezidi affair, she began to distance herself from Ocampo. When he and his staff contacted her office a month later to discuss a draft report by opposition groups in Venezuela, accusing its President, Nicolas Maduro, of crimes against humanity, torture and murder, she rejected a meeting, saying she had a “full schedule”.

The Ocampo group assumed Bensouda was afraid of the publicity. A few days later, the Venezuelan opposition delivered their report to the ICC - but there was no talk of a meeting with Bensouda in the media.

Like her two employees, Bensouda might also end up facing questions by the Independent Oversight Mechanism (IOM) over these secret contacts with Ocampo and sharing of confidential documents, which she explicitly denied.

But however the investigation develops, there is a question mark over the IOM and the power it has to scrutinize ICC staff.

A few days after #CourtSecrets was published, on 11 October 2017, Ocampo posted a letter on his own website addressed to his successor, Fatou Bensouda.

He asked Bensouda to transmit to the Presidency of the court “my offer to fully cooperate with the IOM authorities and regarding the scope of the inquiry.” He also suggested that some staff at the Court organized leaks against him.

It is ironic that he would invite scrutiny by the oversight body, because, according to the e-mails, during his final years at the ICC, Ocampo battled to limit the IOM’s power, which would have forced him make financial disclosures, including his two offshore companies.

So substantial was his opposition that in November 2011, the President of the Assembly of the States Parties, a parliament of the 124 member states that finance the ICC, wrote to Ocampo, warning him, “Don’t conspire about the IOM too much!!!”

Although it was established in 2009 by the Assembly of States Parties, the IOM has only been operational since the beginning of this year.

It is responsible for investigating only the administrative aspects of the Court, rather than its judicial functions, but its existence alone was enough to prompt Ocampo to accuse the member states of the Court of trying to undermine his independence. This argument was widely echoed by NGOs.

Ocampo also set about campaigning to limit measures protecting ICC whistleblowers and ensuring that the IOM could only investigate his office with the approval of the Prosecutor. In other words, only he could authorize an investigation into himself or his staff.

Ironically, after leaving the Court in 2012, Ocampo joined the New York law office Getnik & Getnik, specializing in the lucrative whistleblowing business, where his firm would be in a position to obtain financial rewards from the U.S. tax authority the IRS, by supplying them with company financial data detailing possible tax fraud.

In 2011, delegates from several states waited for Ocampo to leave before continuing the discussions about starting the IOM and oversight rules.

“It [would] be good to postpone the decision as the Prosecutor dealt [with it] as if it [were a] personal affair,” wrote one diplomat.

Several states suspect Ocampo of blocking the measures, and lodged complaints about this issue. It would take until 2013 for the IOM rules to be adopted, and another four years for it to become fully operational.

By this time Ocampo had left his office. Therefore he was never required to disclose the existence of secret companies in Panama and the British Virgin Islands, which he held while in his public position. Also, he never felt scrutiny over how he routinely transferred confidential Court files from official e-mail to his private account.

One week after our revelations, the Court assured that it “was not aware of any of [Ocampo's] private financial arrangements while he served as Prosecutor”.

Asked by Mediapart, Human Rights Watch's director, Ken Roth felt that “if Ocampo actually held offshore bank accounts, then it becomes difficult to trust his independence. No matter what he did with his accounts.”

Two weeks ago, when magazine Der Spiegel quizzed Ocampo himself on whether he told the Court about his offshore arrangements, he answered briefly that: “They never asked.”