Alex Ulmanu / 25 December 2013
In a country divided between the influence of the EU and Russia, Christmas is a political celebration 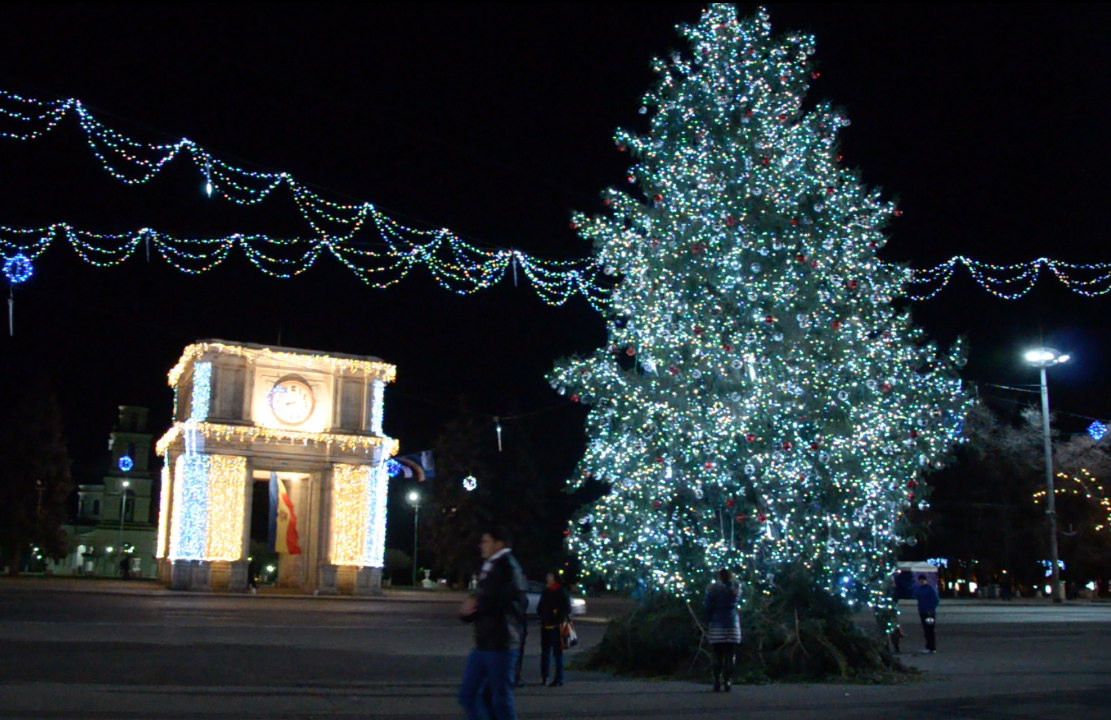 Christmas lights in Chisinau go up every year at the start of December. Photo: Roxana Teodorcic

Christmas used to be so simple for Daniela Hadei, a student who works as an online sales manager.

Her family, like most in this small ex-Soviet country, celebrated Christmas on 7 January, according to the Julian calendar of the Russian Orthodox Church.

Two weeks earlier on 25 December, they carried on as normal, except calling up their relatives in Romania to wish them a Merry Christmas, because the Romanian Orthodox Church follows what they call the 'New Style'.

But last year she did not know when to say 'Merry Christmas' to her family.

This is because more people in Moldova, especially the young, have started to celebrate Christmas on 25 December, like most Christians around the world.

Many Moldovans are honoring two Christmases and Daniela - like many - is feeling confused.

I queried about a dozen young people living in Moldova and they share the same feeling: far from being twice the fun, a duplicated Christmas loses the festive spirit.

One reason is behavior. Many citizens of Moldova have been working or studying in neighboring Romania and west Europe, and have imported Western-style Christmas to Moldova.

However the majority of work migrants from Moldova still work in Russia.

With society divided between those who would like the country to stay under Moscow's sphere of influence and those who want Moldova to get closer to the European Union, both sides have tried to use Christmas to their advantage.

The former is the largest church in the country, but in recent years both the Russian and the Romanian churches have been competing to keep - or attract - priests and parishioners.

The fight for religious influence mirrors the one for political dominance. Most of Moldova's Orthodox Christians have been traditionally observing the 'Old Style' (or the Julian calendar) rather than the 'New Style' (or the Gregorian calendar, observed by most Christian churches around the world), and this is how the Christmas date has become a subject of national debate.

For years, Dorin Chirtoaca, the liberal mayor of Chisinau, has been promoting closer ties with Romania and the European Union, as well as making 25 December the official Christmas Day in Moldova.

In 2007, he was battling the communist government in power at the time for the right to install and light up the official Christmas tree of the city before the 'New Style' Christmas.

Because of his efforts, the Christmas lights in Chisinau have gone up on 1 December and the city officially celebrates Christmas on 25 December.

This December, the pro-European coalition which now runs Moldova has passed a law making 25 December an official holiday, despite opposition from the communists.

Pro-European politicians had been arguing for years that Christmas Day should fall on the same day as in the EU. The liberals have been saying that such a decision would be a step toward the country's European integration.

However, celebrating Christmas on December 25 is more of a political - and personal - affair rather than a church-going event.

Although the Romanian church observes the 'New Style,' its Moldovan bishopric is defined as an 'Old Style' church. Christians in Moldova have traditionally observed the Julian calendar, and no church seems to be willing to alienate parishioners by changing their holidays.

Many young Moldovans now celebrate Christmas with friends on 25 December and with their parents on 7 January.

"What's tragic here is not that we celebrate Christmas on two different dates," says Tatiana Etco, a Chisinau-based journalist."But that we've kind of lost the holiday spirit."

She says the members of her family only say 'Merry Christmas' to each other, but are no longer aware of the significance of the holiday.

"We don't know what it means," she adds. "It's been lost in all the conflicts between the churches."

Alex Ulmanu is reporting on religion as a fellow with the International Reporting Project (IRP).