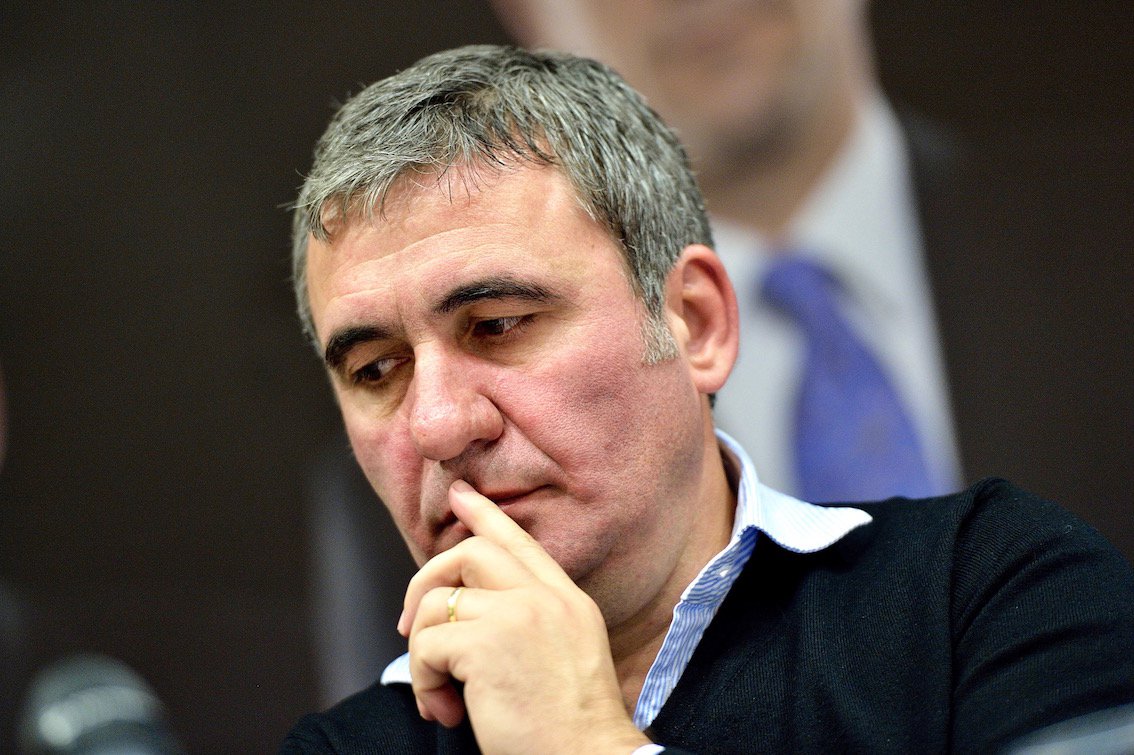 Known as the 'Maradona of the Carpathians', Gheorghe Hagi plied his footballing genius in Romania, Spain and Turkey for two decades. Now he owns a training academy. It's up for sale, if anyone's interested.

On 31 May 2014, teenage right-back Cristian Manea became the youngest ever player for the Romanian National Team. At the age of 16 years and ten months, he held off Albania’s striking force for 90 minutes. Romania then celebrated the friendly with a one-nil win.

The defender was officially a hot prospect.

Born in Agigea, near the city of Constanta on the Black Sea coast, the protege built up his talent at the local training school Academia Hagi. This was run by its namesake legend - an ex-attacking midfielder for Barcelona, Real Madrid and Galatasaray known as 'Regele' in Romania. The King.

But Manea was fresh - and had played only five games for Hagi’s local side, Viitorul Constanta. His selection for Romania was a surprise.

Three weeks later, on 23 June 2014, the boy was transferred from Viitorul in Romania to Cypriot club Apollon Limassol for 2.5 million Euro.

Apollon Limassol is one of the larger clubs from a small footballing nation. The club has a line in purchasing the most talented players from countries with a more glittering heritage, such as Romania and Serbia.

The 2.5 million figure was high for a Cypriot club for an underage player. More strange was that, at the time of the transfer, Manea was valued at 300,000 Euro by comprehensive football website TransferMarkt.

Even more strange was that this deal took place in secret. There was no public announcement. Manea continued to play for Viitorul as though such a huge transfer for such a young player had never happened.

And a month before the deal, on 15 May 2014, we can now reveal that Viitorul, represented by Hagi as chairman, signed a mysterious agreement with an offshore company in Malta, Dito Trading and Consulting Limited, represented by “director” Karl Schranz and the German FIFA agent Thorsten Weck.

From documents in the Football Leaks trove, it appears Viitorul offered a deal to the Maltese company based to “evaluate“ the transfer of Manea's rights from Viitorul.

At that time, Hagi’s club acknowledged “Dito has introduced Viitorul to Apollon Limassol” and “assisted Viitorul successfully to sell the rights”.

Yet Dito is an invisible company which has no real footprint in the transfer or consultancy market. In the Football Leaks data of 18.6 million documents, its name only appears once. It has no website. It has no reputation.

In exchange for this evaluation of the transfer, Hagi accepted to pay the firm the difference of any sum over 1.5 million Euro from the transfer of Manea.

At the moment of his sale, Hagi’s academy had debts of 19.4 million lei (approximately 4.4 million Euro), and the money from Cyprus could allow Hagi to pay off part of this cash and fund the development of other young players.

When Apollon offered Viitorul 2.5 million for Manea, he was obliged to send to Malta 40 per cent of the transfer amount he received. A cool million.

According to FIFA studies at that time, the average commission paid by clubs to agents for international transfers was around "28 per cent of the value of the transaction".

And this was only a consulting fee. 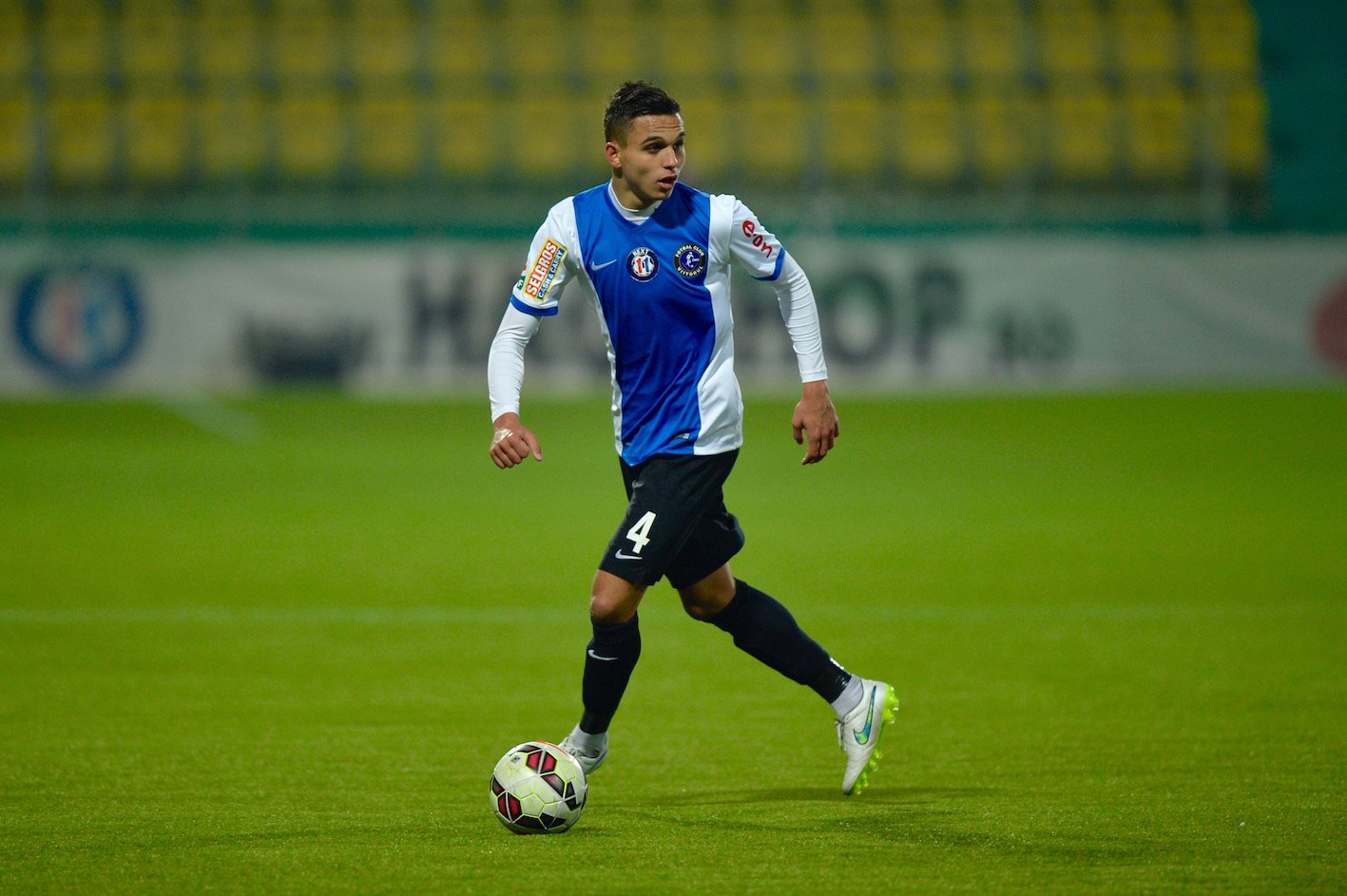 Cristian Manea played five games for Viitorul Constanta, before being called up to the national side

Who received the money?

Karl Schranz is the Dito Trading and Consulting Limited director who signed 'The Manea Agreement’. He is also listed as head of the Account Department for the Maltese company E&S Consultancy Limited.

This firm is based in the same town as Dito Trading in Malta - St. Julians. A trained accountant, Schranz advises and assists in all Malta Financial Service Authority (MFSA) license processes, ‘igaming’ and corporate finance.

Thorsten Weck is a football intermediary who owns a company, Thorsten Weck Sportmanagement, headquartered in Dusseldorf. He is not a major league agent. His portfolio includes a few average German players, some youngsters with Turkish origins and a couple of Uruguayans. His best player was 22-year-old German national player Max Meyer (value according to transfermarkt: 16 million Euro), whom he lost to Rogon, a major player in the Bundesliga.

The allegation is that these men are just a front. However neither Weck nor Schranz replied to interview questions. The key to the real owner of Dito may be hidden behind Dito Trading and Consulting Limited address:

This is the same address used by Lian Sports Limited, the offshore sports management controlled by controversial businessman Abdilgafar “Fali” Ramadani, which acquires "highly skilled talents" in the Balkans, according to its website.

A Macedonian of Albanian origin who hates to be photographed, Ramadani did not have an agent’s license at the moment of Manea’s transfer, an essential condition in the summer of 2014.

At that time, Weck had a FIFA license obtained by the German federation, a reason which allowed him to sign the contract of the ‘evaluation’ of the Manea transfer.

Ramadani’s name does not appear in the Football Leaks documents linked to Viitorul and Apollon. It never appears on any contract or agreement. Instead, the signature for Lian Sports comes from the former goalkeeper of Partizan Belgrade, Nikola Damjanac, who is the Macedonian’s partner at Lian Sports.

In the German media, Ramadani has been associated with the Albanian brothers Bashkim and Burim Osmani, suspected by the German secret service of involvement in a criminal network and drug-trafficking in Hamburg.

Meanwhile Apollon Limassol is a club where Israeli super-agent Pini Zahavi holds influence. Now in his early 70s, Zahavi is known as the man who introduced Roman Abramovich to Chelsea, and Ramadani is one of his associates in eastern Europe. In Football Leaks, he refers to 'Fali' as “my guy” in a February 2014 email.

Practically, the Zahavi-linked club Apollon Limassol paid 2.5 million Euro for a player, but in just 48 hours, figures close to Zahavi's network recouped one million Euro of that amount back to Malta through a “consultancy” agreement.

And both transactions were made using the Romanian bank account of the now 51 year-old Hagi.

Everyone concerned appears to be close. According to sources at Gazeta Sporturilor, Ramadani and Hagi met a few times in Palma, on the island of Mallorca, one of the locations where the Macedonian has made his home after leaving his business from Germany.

In the Football Leaks documents, in January 2015, an agent from Lian Sports proposes the five “the biggest talents” in the Balkans to a Portuguese club. Players from Academia Hagi are among them.

The agent makes the approach after the vice-president of the Portuguese club has been in conversation with ‘Fali and Pini’. This is a certain reference to Ramadani and Zahavi.

Manea: the Cyprus player who never was

Despite a 2.5 million Euro move to Apollon Limassol, Manea never went to the club. Nor did he even visit the Mediterranean island.

Instead he stayed in Constanta, Romania. The transfer move was arguably not intended to sell the 'player' Manea to Apollon Limassol, but only his ‘rights'.

This activity - known as Third Party Ownership - is now forbidden under FIFA regulations, as it gives a third party influence over a player’s future, independent of his club and his own sporting will.

However clubs can get around the new rule by selling a player “on paper” to one club, even though he may be destined for another location.

One year later, the teenager unwittingly finds himself in another scandal.

Manea: the Chelsea player who never was

This was picked up by newspapers such as L’Equipe, Gazzetta dello Sport, The Independent and the Daily Express, who published the story, using information from the Romanian media, leaked from Hagi’s entourage.

The prospect of a move to Chelsea wasn’t new. A few months earlier, in March 2015, the Italian journalist Gianluca Di Marzio announced on his Twitter account that Hagi had agreed a 3.1 million Euro transfer to Chelsea for his player.

Even the makers of the bestselling video game Football Manager included Manea in Chelsea’s squad for the 2015/16 season.

Speaking on a Romanian TV channel after the news of the transfer to Chelsea went public, Viitorul's general director Cristian Bivolaru was asked about the move to the London club:

“Manea's transfer is done,” he said.

But he added a cavaet that lacked clarity.

“His destination is still under discussion.”

Was he to be sold to Chelsea and then put out on loan? The dream of walking through the tunnel of Stamford Bridge was fading.

“It seems that [the destination] will be [Belgian club] Mouscron. We wanted to keep the player more, but that was part of the deal.”

A month later, in June 2015, the website of Academia Hagi carried no information on one of its brightest talents moving to one of the world's biggest clubs.

Chelsea also published no details of the transaction - nor did it make an announcement or denial. The summer passed and Manea ended up at Mouscron. On its webpage, the Belgian club confirmed the talented Romanian defender was on loan…

But on loan from Chelsea.

Of course, this was not true. Manea was never sold to Chelsea. He wasn't even part of Viitorul Constanta at that time. He was still signed to Apollon Limassol.

So Reuters published news about the transfer of a player between two clubs, one of which did not own him, and the other which never planned to own him.

But the headline news should have helped increase the market value of the player - and the interest of other clubs.

Now Manea remains in Belgium, where he has made only seven appearances for the Mouscron team. Many top footballers from Lian Sports have passed to Apollon and made their way to Mouscron, a club which has in its council of administration Gil Zahavi and Adar Zahavi, the son and the nephew of the Israeli impresario.

The patron of Academia Hagi refused to respond to ten questions which we sent on 23 November. The next Sunday, we received a short message stating that “we remind you” that we have “already offered our point of view” - in reference to an earlier story on the matter. A follow-up gained no response.

Manea himself would not answer questions on this saga.

And since the glory of becoming the youngest ever player for Romania, he has since never represented his nation on the field.

But he is still only a teenager.

Update (5 December 15:30): Following the publication of this article, Gheorghe Hagi issued a statement (in Romanian) 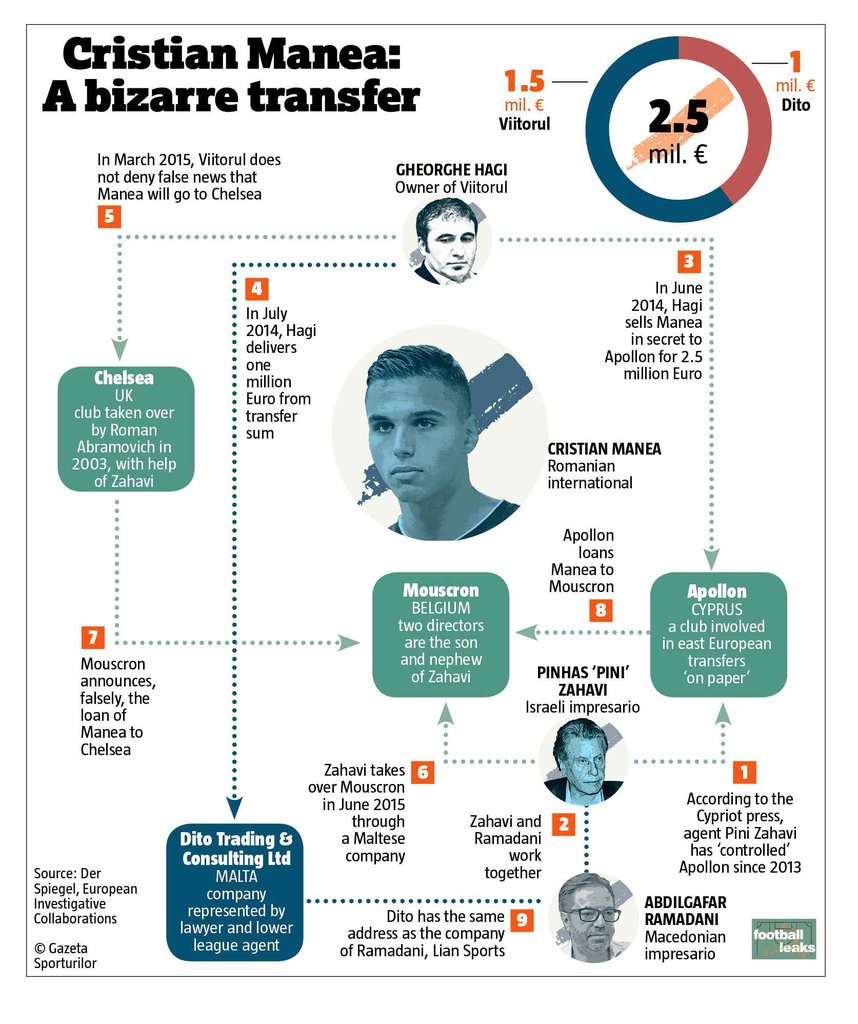 15 May Dito Trading and Consulting receives a mandate from Gheorghe Hagi to evaluate the transfer of the economic and federative rights of Cristian Manea.

31 May Manea surprisingly became the youngest ever Romanian National Team player at the age of 16 years and ten months. Since that day, he hasn’t play another minute for the national team

23 June Unknown to the public, Viitorul and Apollon Limassol secretly agree Manea’s transfer and his following loan back to the Romanian club for one season

13 September Hagi says Manea “didn’t sign any pre-contract with a club” although he had already been sold to Apollon Limassol. This indicates that he wanted to keep this deal secret. This deal effectively gives Apollon Limassol 'Third Party Ownership (TPO)' over Manea

11 June Romanian and International media announce Manea’s transfer to Chelsea. Nobody denies it

30 June As the FIFA deadline expires, a group of investors led by superagent Pini Zahavi buy Belgian club Mouscron through one of Zahavi’s companies: Gol Football Malta Ltd. They inject 2.5 million Euro with a further six million Euro, promised over the next three years [Zahavi later sells the club]

31 August Mouscron officially unveils Cristian Manea, a “player loaned for one season from Chelsea”. In fact, he was taken from Apollon Limassol. 24 other players signed for the Belgian club in a short period of time

On the other hand, Apollon’s president Nikos Kirzis confirms the transfer of the Romanian player to his club.