EIC 2016 / 06 December 2016
#FootballLeaks reveals the most obscure and puzzling clauses from contracts of players loved and loathed around Europe - from our trove of 18.6 million documents 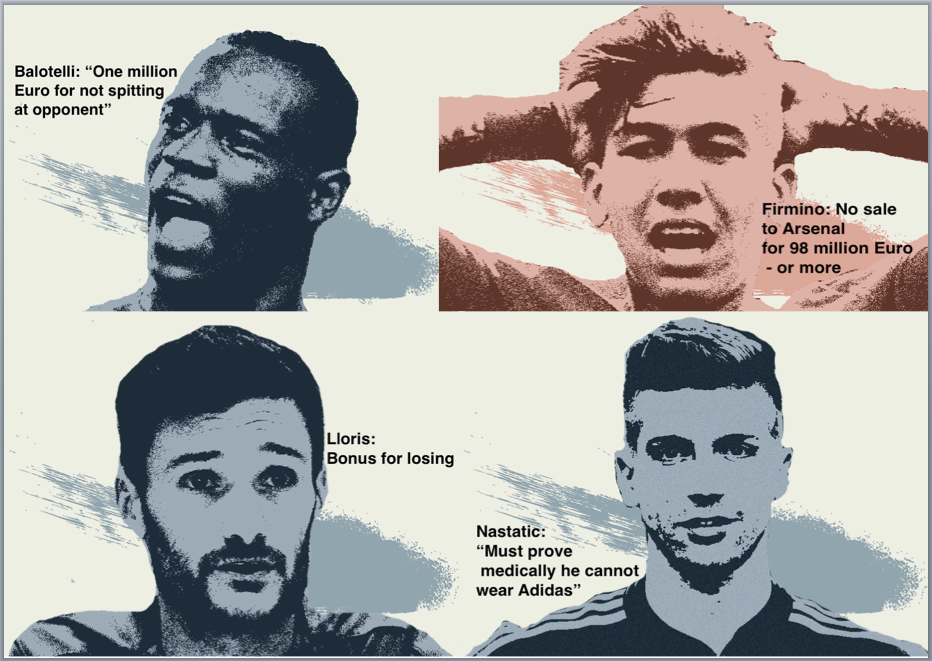 Balotelli: "One million Euro for not spitting at opponent"

If this wasn't enough - he enjoyed a bonus which amounted to 150,000 GBP for every five starting eleven appearances, plus around 5,000 GBP per goal and 500,000 GBP if he is named the Premier League top goal scorer.

But there is more.

"If he is not dismissed from the field of play for more than three times or more occasions for violent conduct, spitting at an opponent or any other person, using offensive, insulting or abusive language and/ore gestures and/or dissent by word or action..." he will receive one million GBP

In sixteen appearances for Liverpool between 2014 and 2015, Balotelli scored one goal.

In the summer of 2014 the captain of Denmark's national team at the time, defender Daniel Agger, then 29, is transferred from Liverpool FC to home side of Brøndby for three million Euro.

Through this transfer, Agger rejoins the team which gave him his breakthrough. Brøndby calls it "a historical deal", and states that Agger is "the greatest player ever to be brought into the Danish Superleague".

Around 2013, while Daniel Agger was still playing for Liverpool, he started a dredging and sewage service company in his home town Hvidovre with his brother and a friend. The company's name is 'Kloagger' deriving from Agger's name and the Danish word 'kloak' which means 'sewer'.

Besides being paid 450,000 Danish kroner a month plus bonuses - one of the highest salaries in the league history - Brøndby allows Agger to place an unusual clause in his contract to give him and his sewage service company a pitchside advert during all Brøndby home games between 1 January 2015 and 30 June 2016. Here an LED flashes the name and logo of 'Kloagger' over 215 metres for 27 seconds - eight times in each game.

Never before has a small sewage service company achieved so much exposure in Denmark.

Daniel Agger is known in Denmark and Liverpool as a true working class hero.

Austrian club FK Austria Wien is scientific about exactly how much players can party. In this contract for forward Tobi Olarenwaju "Larry" Ayobami Kayode, it states:

If the players fancy a Domino’s after a game - they are out of luck.

In the training room "no food delivery can be ordered to the room”.

To labour the point, it even adds with an exclamation mark at the end: "no room service!”

For every one of those breaches there are different fines.

Using a cell phone in the team bus means a 100 Euro fine, getting a yellow card due to insult or derogatory gestures: 500 Euro, late for training: 100 Euro for every five minutes.

If the player wears shoes in the medical area, he faces a fine.

Meanwhile it seems smoking is only banned "during common public events" and "on the bus".

Iraqi Player: "Do not convince others to leave the club"

When Iraqi left back Ali Adnan Kadhim Al-Tameem switched from Baghdad FC to Turkish club Rizespor, his new Turkish bosses were paranoid he might convince his colleagues to transfer out of the club and represent the players as they depart:

"Clause: j) The Player shall not try to convince any other Professional Football Player/Players employed by the Club to leave his Job or to be transferred to another sport club or shall not act as an agent for such purposes".

Van der Vaart is allowed to wear whatever sports shoes he wants, as long as they have no traces of the color red. This is because red is the color of Sevilla, the local competitor of Betis.

The Dutchman is also forced to finance the retired players of the Spanish club. Inside clause six of this clause, 'Percentage of future transfer', a paragraph includes a 'voluntary' solidarity with Fundación Real Betis Balompié and Old Betis Players Association.

"Voluntarily, the player will give (freely and as a donation) the equivalent amount to 1% of the retribution from Real Betis Balompié during the validity of the contract. This [sic] amounts will be deducted from each paycheck".

Schalke 04 requires its Serbian defender Matija Nastasic in his contract from 2015 to only wear Adidas. "If the player proves to Schalke 04 that he can't wear Adidas shoes for medical reasons, he is allowed to wear shoes of another brand. As soon as this proof is no longer given, the player will play and practise with Adidas shoes."

French Tottenham Hotspur goalkeeper Hugo Lloris will be paid 7,000 GBP for each and every appearance in the starting eleven in the First Team competitive matches, if Spurs win the match. Should Tottenham draw or lose a competitive match and the player makes an appearance in the starting eleven, then the player will be paid 3500 GBP

Normally the salaries of players rise as they spend more time at a club, where they must show loyalty, team spirit, perseverance and maturity.

But in the case of 27 year-old Spanish midfielder Ander Herrera and his contract with Manchester United, this goes in a downwards direction.

If you are Arsenal and you want to buy Brazilian offensive midfielder Roberto Firmino from Liverpool and you have one billion Euro, and you are willing to pay this whole amount for the privilege - then you are not in luck.

When signing a contract with Liverpool on 1 July 2015, Roberto Firmino, then 23, receives an exit clause. It can be triggered two years ahead of the end of his contract.