Despite warnings of security risks, the EU’s freedom of goods policy facilitated the sale of weapons leading to last year’s terror attacks in Paris 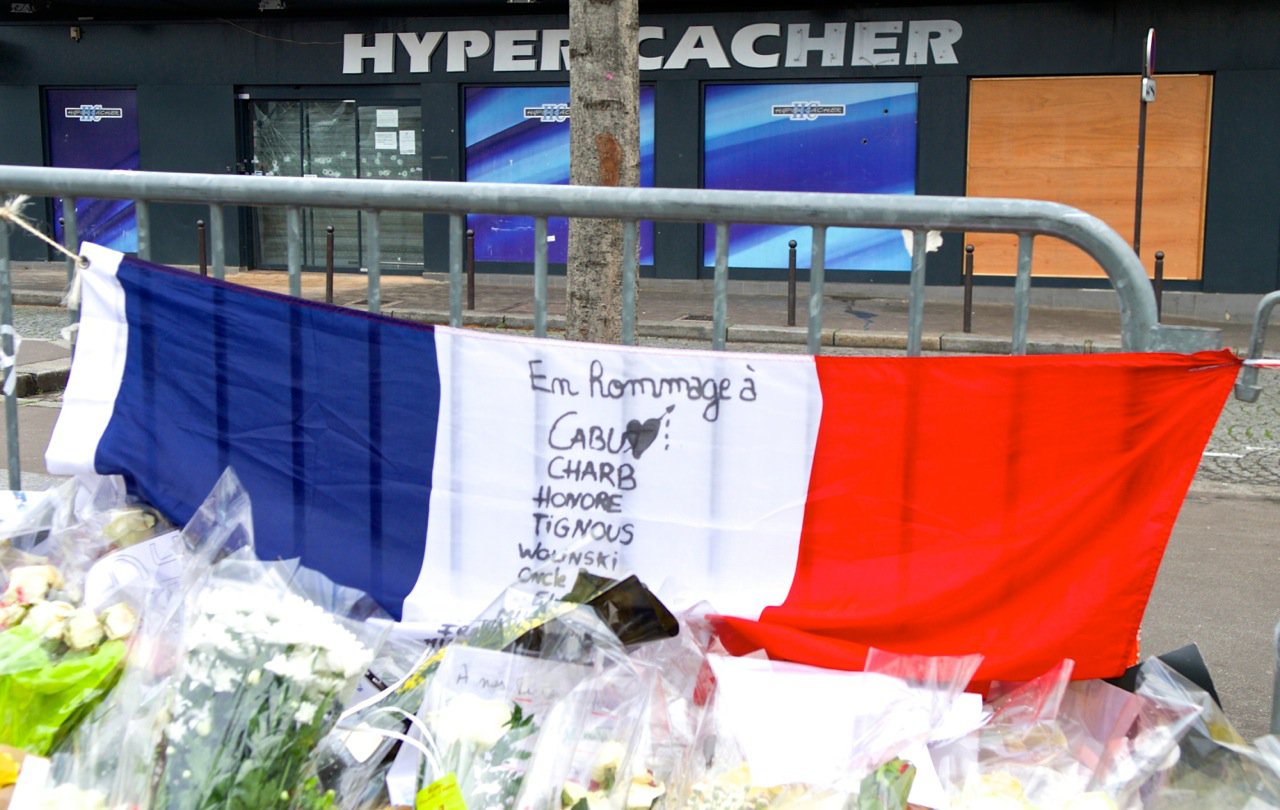 On 9 January 2015, 20 year-old student Yohan Cohen was lying on the floor of the kosher supermarket Hyper Cacher in Paris’s 20th arrondissement.

Next to him lay three other corpses.

A man holding an assault rifle in each arm had shot him in the head and chest.

Cohen was crying and screaming. The shooter turned to the other hostages and asked them what he should do with Cohen?

“Don’t kill him,” said the others.

But it was too late.

The assailant, ISIS allegiant Amedy Coulibaly, was following an order to kill Jews shopping kosher for the next day’s Sabbath.

Coulibaly had a criminal record since his youth and was convicted for armed robbery in 2004. During his time in the Fleury-Mérogis Prison in the Parisian suburbs, he answered the call to become a Jihadist.

In his possession were two Czechoslovak assault rifles Ceska VZ 58. One was an extra short version, modified to shot blanks, and then reactivated to be lethal - this was his weapon of choice.

But thus gun should never have been on the market.

Due to a loophole in EU legislation, the trade has been open for buyers to legally purchase blank-firing weapons via websites on the continent.

These weapons can be converted in two hours into active arms - and are sold on to criminal networks, some of which are connected to ISIS terror cells.

The guns originate from ex-Communist countries. The Balkans and former eastern Bloc nations are still a massive source of used arms for terrorists and criminal networks.

And this trade is on the rise - because arms are trafficked into the EU from new conflict zones and hotspots such as Ukraine, Iraq, Egypt and Tunisia.

An international team of journalists, who are part of the newly established network European Investigative Collaborations, has spent three months probing the passage of arms that led from a Slovakian website to an ISIS terror attack and detailing how Brussels’ failure to impose comprehensive directives has facilitated the sale of deadly weapons.

150 dead and almost 400 wounded – this is the stocktake of the Islamist terror attacks in west Europe during 2015.

This includes the raid on the newsroom of Parisian magazine Charlie Hebdo and the Hyper Cacher supermarket.

There was also the massacre in November at Paris’s Bataclan club and the shootings on neighboring streets. Added to this is the hit in Copenhagen in February against a Synagogue and a cultural café. And the failed attack in the Thalys speed train from Amsterdam to Paris in August that was thwarted by the passengers.

During this time, the EU had the tools and information to lessen the ease with which terrorists or criminals could get their hands on weapons - but the authorities failed to act due to dithering in Brussels and their fetishism with the free movement of goods.

A history of fudging

In 1991 the EU tried for the first time to regulate the European arms trade. The Firearms Directive was the result, focused mostly on free trade in the domestic market.

Back then blank firing arms - also known as alarm weapons - were not even covered by the legislation, because they were not considered firearms.

On 21 May 2008 the European Commission announced the imposing of tougher regulation on weapons in all member states.

The goal: if gun nuts wanted to hang a Kalashnikov in their living room as a conversation piece, then the weapon should be unable to be reactivated with live ammunition.

For these types of weapons, according to the 2008/51/EC Directive, the EU wanted stricter technical standards.

“The Commission will enact joint directives for deactivation standards and techniques, to make sure that deactivated firearms are made unusable for good,” it stated.

But two things were missing. First - a deadline for when the EU plans to impose such standards in all member states.

Secondly, alarm weapons - such as those employed in the Paris shootings - were missing from the directive.

These weapons are used on film sets, in parades or even by people who want to pose as Rambo on their Facebook profile. For the EU, this category was a security blind spot.

No action on ‘alarm weapons’ fears

In 2010, the European Commission drew up a report noting that policy experts, invited by MEPs, had explained the potentially criminal use of alarm guns, which could be converted into deadly firearms.

The document stated that “reported cases” of these guns and replicas “with ill intent to intimidate or stage hold-ups” must be seen “in the context of the relatively high number” of alarm guns - and other non-lethal weapons like airsoft guns - in the European Union.

The Commission was concerned with maintaining its principle of the free movement of goods within Europe, as arms production and trade constitute a massive and legitimate European business.

The report stated that “national rules governing” the marketing and use of replicas, of which it included alarm weapons in several references, “must respect the principle of the free movement of goods (Articles 34 to 36 of the Treaty on the Functioning of the EU).”

Article 34 prohibits national measures which can or could, directly or indirectly, impede intra-community trade.

Thus regulations by one Member State prohibiting the import, manufacture, sale or use of replica firearms could “constitute a barrier to trade within the meaning of Article 34. ”

The same document mentions experts’ concerns about the re-activation and lethal use of such weapons. The narrative works like this: a Communist-era weapon is ‘deactivated’ by a gunsmith and converted into an alarm gun.

It can then be bought and sold on in an open and unregulated market within the EU (although not in every country).

This is a way for the gun to become ‘legit’, before it enters the criminal underworld and can be reconverted into a deadly weapon.

Concerned by this phenomenon, in September 2013 Slovakia sent out an alert to all European police authorities, in English, about how easy alarm weapons can be transformed into killing machines.

Slovakia was a country with relaxed regulations on turning firearms into blank-firing weapons. The Slovak police were worried, so published a poster with 16 photos.

This detailed how blank-firing weapons can be reactivated using slight changes: such as removing two steel rods which blocked the barrel. It was easy to buy such a weapon in any arms shop - the only condition was to be over 18 and to show an ID.

The police poster was showing a pistol that was turned into a blank-firing weapon by a Slovakian gunsmith company called Kol Arms and an assault rifle Ceska VZ 58. Both were later reactivated illegally.

These and other expert views were heard in Brussels. In October 2013 a report by the Commission said: police experts are signalling that alarm weapons are “illegally transformed into deadly firearms”. The Commission added that they are aware of “very important differences in deactivation standards” from one member state to another.

It was also aware of killings using with such weapons. After it was evaluated, at the end of 2014, Brussels missed one point: deactivation standards are applied only to firearms that are made totally unusable.

So again this did not apply to blank-firing weapons. Therefore the Slovak alert was ignored.

What is not clear is whether there was an intention to open this loophole.

In May 2014 there was a meeting of EU experts on the arms black market. On the question of what to do against member states who are not implementing the 2008 EU Directive, one employee of the General Directorate for Enterprise and Industry said there were some inquiries underway relating to possible non-compliance, but no other action has so far been undertaken.

“It was noted that the Directive is based on the principle of minimum harmonization.” In other words - the directive had no teeth at a pan-national level.

After the series of attacks in Paris and Copenhagen, on the 18 November 2015, the EU announced a proposal to change its Directive on Firearms.

The EU finally wanted to send out a strong signal that it was changing the arms legislation in the member states.

Jean-Claude Juncker, the European Commission president, accompanied the announcement with a couple of words revealing more than he intended: “We will no longer accept that organized crime groups can get access to fire arms”.

This seemed to imply that the EU had been accepting that they could gain such access in the past.

But as of today - an EU spokesperson confirmed there is still no international regulation on alarm weapons.

But further regulation is needed. Since last year, investigators have realized it’s not only about blank-firing weapons like the Ceskas used by Coulibaly; or about the six Tokarev pistols, which followed the same track from de-activation to blank-firing weapons and back to shooting active rounds.

If terrorists or criminals in Europe want to get their hands on a weapon they have a huge arsenal from which to choose, hidden by an impenetrable suppliers network.

There are old shooters which can still kill, such as the Russian Nagant revolver, model 1895 and manufactured in 1932, which was found in the apartment of Coulibaly. Or the unmarked Belgian FN Browning, obtained by Abdelhamid Abaaoud, the mastermind behind the attacks at the Bataclan club in Paris.

There are stolen military or police weapons, used in the hit in Copenhagen that left two for dead and five wounded.

Also dangerous are the real Kalashnikovs, stockpiled in private basements around the Balkans, which end up being sold in bazaars and then head towards Western Europe hidden in tourist buses or cars.

After the Charlie Hebdo attack which left 12 people dead, two such AKMs were found by the Police at a sign-making company in Dammartin-en-Goele in the Ile de France.

Following the November attack in Bataclan that left 130 dead, six other such weapons were found in the club and the terrorist’s the getaway cars.

Our investigation continues here into how the path of weapons used in Paris terror attacks leads to a Slovakian website with connections to a UK gangster, a French ex-paramilitary police informer and a German Neo-Nazi.

Ján Kuciak from Slovakia has contributed to this research.