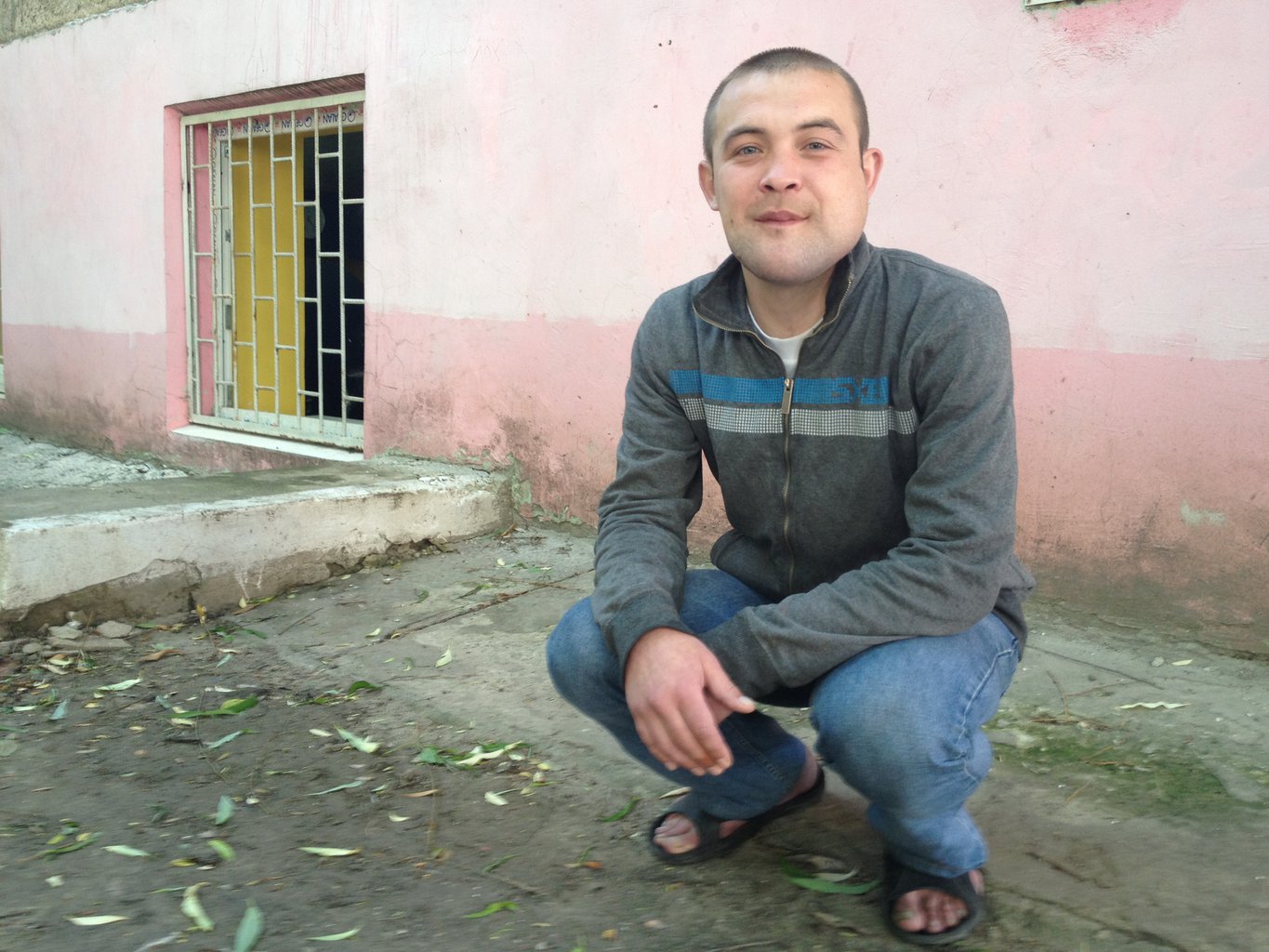 “When the doctor found me a titanium jaw from Moscow, I was so happy,” Dmitri Ivko, ex-user of Vint

“You have to keep moving,” says 28 year-old Dmitri Ivko, an engineering graduate in Chisinau, Moldova. “You have a lot of energy. I walked from one end of the city to the other - back again and then back again once more. If you are in a club and you start dancing on the drug, you can’t stop. You can’t eat. You can’t sleep. My record for not sleeping on the drug was 11 days and nights. At the end of that time, it was like I was hit by a train - all my arms, inner organs, legs, jaws, everything was hurting. Then I slept for at least 48 hours, without waking up.”

Desperate for a high, but lacking cash and access to quality narcotics, Moldovan drug users are turning to Vint - a home-made concoction based on ephedrine from cold-and-flu relief tablets, sold at their local pharmacy.

Users mix the drug with iodine and red phosphorus scraped from the sides of matchboxes into a vial to inject inside their veins.

But the conversion of this household remedy into an addictive stimulant can cause bone decay in feet, legs and jaws - risking loss of limbs and fatal consequences.

In 2007, as a student, Dmitri started cooking up the new drug with friends before they went clubbing.

“When I injected the first time, I had never had such a good feeling,” he says. “It is like the soul is leaving the body. Everything is great, everything is beautiful and there are no problems.”

By 2012, Dmitri was taking Vint four times a day. Following a misunderstanding with another user which ended in a fist-fight, he was punched in the jaw. The bone began to hurt and a bruise started to swell in his cheek.

However Dmitri ignored the injury and continued to inject, until the pain was so intense, he visited the hospital.

Analysing an x-ray of the damage, the doctor told Dmitri he had a bone infection called toxic ostoemyelitis, due to the Vint.

The red phosphorus from matchboxes was depositing in his bone tissue, causing mineral poisoning, while the ephedrine from the flu tablets was narrowing the blood vessels, restricting the flow of blood.

Because the lower jaw area is a part of the body sensitive to infection, this two-pronged attack was causing the bone to decay.

“The doctor told me if I went on taking drugs, this would get worse,” he says. “But after one week I was using again.”

Due to his facial bones decaying, pus formed in balls behind his jaw and under his chin. He returned to the hospital and the doctors put a tube into the swelling to drain the fluid.

After the operation, he continued to inject.

Two months later the pain intensified. A gash in the skin emerged just above his chin.

“I could breathe through my mouth, my nose and also through this hole in the side of my face,” he says.

At this point, the seriousness of the problem was starting to become clear to Dmitri.

An operation was necessary. He went to the clinic accompanied by his mother and pleaded with the doctor, saying he would no longer take vint, swearing that he would “never lie in front of Mama”.

He stayed in hospital, a cloth wrapped around his jaw to keep his face in place, tanked up on antibiotics.

The doctors told him they had to remove the bone, but the Moldovan national health service does not provide drug users a new jaw for free.

The risk was that without a bone between the chin and the cranium, his tongue could flop back into his throat, suffocating him. Therefore he may need a tracheotomy to breathe.

“When they told me, I was just crying,” says Dmitri. “I did not understand how I could live.”

A Moldova-based NGO run by ex-drug users, Initiativa Pozitiva, gathered together funds from its employees to help pay the 500 dollar cost for a prosthetic implant from Russia.

“When the doctor said he had found me a titanium jaw from Moscow, I was so happy,” says Dmitri.

Local surgeons opened the skin around his head from the right side of the chin near the jaw-line, removing the mandible. They replaced this with a 15 cm-long bracket fixed with two joints to the upper and lower parts of the skull.

Now the left side of his face is swollen, as though half a football is pushing out from his cheek. But new bone is growing back.

Dmitri has no teeth in the lower jaw, so he can eat only porridge and mashed food. But he can smoke.

His doctor told him that if he takes a flight, he has to give a letter to the guards at the security gate, informing them of his new jaw because, between the poles of the metal detector, his face will set off the alarm.

Options for drug users in Moldova are few. Heroin is too expensive and lacks purity. Marijuana does not give a tough enough kick. Meanwhile dealers rarely export cocaine, LSD or Ecstasy to a nation with the status of the poorest in Europe.

While older users prefer a home-made drug from locally grown poppies, Shirka, young people are looking for a cheap high.

Easy-to-make and quick to inject, Vint is an effective stimulant which eliminates the risk of meeting a dealer.

Some users in Chisinau combine the drug with heroin substitute methadone to create a ‘speedball’ effect of stimulant and depressant. Taxi drivers have also used to the drug to keep awake for 24-hour stretches.

But the cases of jaw loss affected by the drug are piling up.

Natalya Rusu, assistant professor in Chisinau’s Maxillofacial surgery at the State University of Medicine and Pharmacy, says she has seen “nearly 200 similar” cases of bone decay in the face and the legs due to drug abuse.

Fatalities are also common. From his friends, Dmitri has lost six to Vint, either due to damage from bone decay, overdoses or strokes.

One per cent shoot up

Wedged between a Russia reasserting its confidence and a European Union tilting towards expansion, Moldova’s population is split between those looking for better prospects in the east or west.

Everyone is travelling. Minibuses, cars, buses and trains are packed with workers shifting products, luggage and themselves to and from Moscow, Spain, Italy, Bucharest or Germany.

This is a country in permanent transit from itself. Everything moves but little is grown or built. This tears families apart. Parents who work abroad leave their children in the care of elderly grandparents, while a growing number of teenagers are home alone, funded by cash sent by Mum and Dad through Western Union.

Bored, left in charge of themselves and with money in their pocket, many teenagers are prone to experiment with forbidden substances without adequate safeguards.

“Young people with nothing to do are left to themselves and, from having nothing to do, that’s when it all starts,” says one Chisinau heroin user.

Problem use of Vint, Heroin and Shirka in Moldova is widespread. There are around 31,000 injecting users - about one per cent of the population, estimate local NGOs.

Many of these are young people without a career or those abandoned by a nation in constant transition.

Due to this state of flux, steady jobs available in Moldova include driving or working for the Government. But users who seek help through a methadone substitution programme are placed on a “narco-registry’ - a list of ‘official’ drug addicts, which means they are restricted from working as drivers or for the State.

Other employment is scarce. Dmitri is a graduate in car engineering and design. But in Moldova there are no jobs in his field, because no one builds automobiles.

He wants to work in restyling cars, modernising the motors with new bonnets, lights and bumpers.

“I want to make old cars better,” he says, “but there is nowhere to do this in Moldova.”

Out of work and lacking a ready income, many users turn to petty crime to fund their habit.

On the main street of the Chisinau, I am about to meet Stefan, a 29 year-old user who has also lost his jaw to Vint, when my contact gets a phone-call saying that he is unavailable. I ask her why. At first she is reluctant to tell me, but then laughs, saying he is with the police.

Later that day the cops release him. We meet and I ask him what happened.

He was eating a sandwich in a cafe when a security guard accosted him, saying he had a video of Stefan stealing a coffee jar from the cafe’s shelves.

He showed Stefan the videotape and called the police, who arrested him and threw him in jail.

“It was strange because I stole the jar two months ago and I had been eating there many times since,” says Stefan. “They only just noticed.”

He paid his fine at the police station and they let him go.

20 year-old Maria has teeth that are orange-yellow and brown, while her gums have traces of black. She wears a red t-shirt emblazoned with the word ‘commandant’ and her hair is cut short with a fringe tucked over ear.

After taking heroin at 15 and spending her late teenage years addicted to Shirka, she turned to Vint as a cheap alternative.

“This was very easy to make at the flat of my friend’s mum, as she had left for Germany,” she says.

To fund her habit she would steal jewellery from her parents and shoplift.

One drug she tried was eye-drop solution Tropicamid, which users inject straight into the vein.

Because Tropicamid was becoming a popular over-the-counter drug for users to abuse, the Government prevented its purchase without a prescription.

But this did not stop users such as Maria.

“We had a friend in a hospital who gave us a bunch of prescriptions ready-stamped by a doctor,” she says. “We could fill these in with whichever drug we wanted.”

Now a regular visitor to the Pas cu Pas (Step by Step) drop-in centre in Chisinau that helps addicts to reintegrate into the workplace, Maria is coming around to the idea of giving up drugs.

Financed by international donors, the centre is a basement in a Communist block which acts as the frontline against drug abuse by engaging users, without forcing them to renounce their habit.

This is the first step towards bringing a hidden, closed and suspicious community back into society.

At the centre, Maria can meet former addicts, try group therapy and find information on life and work skills.

“Because I come here, I do not inject and I have something to do,” she says. “Here there are former addicts and they understand you. It’s different from other people on the street who point at me and say ‘Look at the druggy’. Here people know how you feel and if you feel bad they try to make you think about other stuff. I want to find a job.

"If I could work, I would work, then come here and go to my friends. My life would be - Work. Friends. Drop-in centre. That would be enough.”

Some user names have been changed.

For a further story linked to this article, see our blog Missing Moscow's Drug Bonanza