“We heard about Spain from the TV and now we’re in the capital!” - the Romanian homeless of Madrid

While grand residential projects help regenerate the outer centre of the Spanish capital’s district of Delicias, Romanian beggars build shanty-huts in the dirt 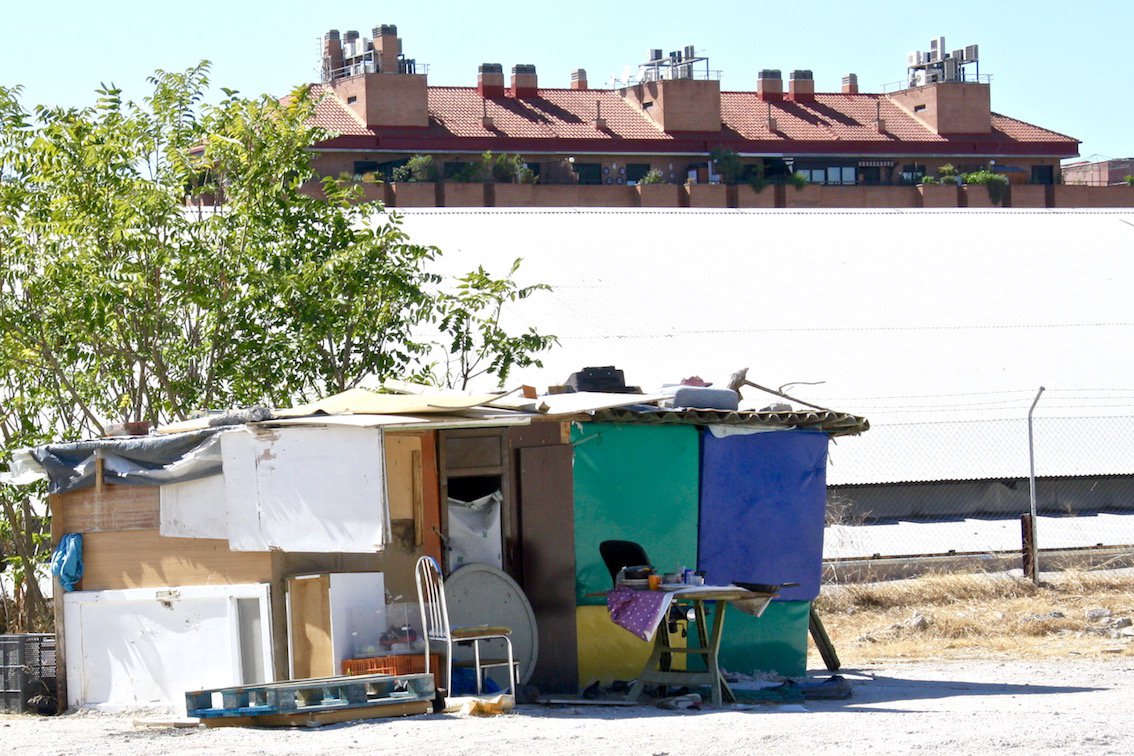 Madrid favelas: Each nationality of homeless has its own separate community (Picture: Michael Bird)

Delicias. In English this means ‘Delights’. A district in outer central Madrid. A warm Wednesday. Huge new apartment complexes of brick and concrete tower either side of a railway. Connecting the two estates is a wide footbridge, with a smooth incline to allow the passage of bicycles. Below the shining new buildings are fenced-off tennis courts, where buff players sport fancy designer wear, and serve aces across the clay.

But alongside the railway is a plot strewn with rubble, overgrown bushes and two massive rusting water towers, separated from the new blocks by a white wall. Under the footbridge are shacks of wooden boards nailed together and covered with tarpaulin. A mini favela takes shelter in the shadow of this huge development. On a sofa outside a shanty-hut sits a man in his late fifties, listening to the radio and drinking beer from a glass teacup. Next to him is a stroller filled with aluminium foil.

This is Costică, from Băilești, a small town in Romania’s arable heartland close to the Danube. He won’t talk to journalists. So we pretend we’re researchers for a university. He will not let us take his picture.

Before the 1989 revolution, Costică worked as a store manager and his family lived well, because he had access to food and goods. “Back then I used to work with a pen in my hand,” he says.

When communism fell, the local economy collapsed. Farming in his town turned from a collective employing every resident into a mechanised industry that ran on profit. “They don’t need people anymore,” he says.

In the 1990s, the post-Communist Government gave back land seized by the state to millions of families, hoping to create a new peasant class of smallholders. But each citizen received barely more than an acre. Costică was not impressed by this amount.

He takes a stick, leans out from the sofa and maps out a small square in the dust.

“How can you make farming on that?” he says.

So three years ago, Costică moved with his wife, his son and his sister-in-law to Spain. “As I didn’t have a job anymore, I had to come here,” he says. “God brought us here.”

He has a house and relatives in Băilești, including three grandsons. But he can’t bring them here. This is because the local social services would take the kids away, as Costică isn’t allowed to grow up children between four pieces of wood nailed together underneath a bridge.

As to why he choose this to come to this country and city, he says:

“We heard about Spain from the TV - and now we’re in the capital!”

A rat scuttles across a barbed wire fence. There is no one else here except Costică’s sister-in-law. They speak Romani together. Most of the shanty-huts are unoccupied, because the Romanians from Băilești have gone to Seville to pick grapes. But Costică is too old for fruit-picking.

Instead he says he makes a living from selling scrap wire and aluminium, as well as begging. “I sit in the street and I stretch out my hand,” he says.

He earns up to seven Euro per day, but his family - of three people - can earn 300 Euro a week.

The cops only come to check their papers. “We don’t steal - that’s the last thing we would need. The police leave us alone because we don’t commit crimes," he sighs. "God protected us so far.”

But he says other residents in the squat were not so peaceful. “When they drink, all Madrid can hear them,” he says. Costică claims they were Turkish, although he doesn’t seem 100 per cent sure. A woman in the new blocks called the local mayor to complain when they played their music loud or set bonfires alight.

“We have learned to have smaller fires and not to play our music so loud,” says Costică. Now the local residents are used to him - he says.

There are eight Romanian families on the other side of the camp, from Craiova - a large town near Băilești. They live one hundred metres away. But Costică won’t make the short two-minute journey to speak to them.

“Because they are from another race,” he says.

Forced beggary “only from Romania”

We were here in Spain last September to examine forced labour run by criminal gangs. In 2013, the Spanish police say the only proven cases of work exploitation for begging came from Romania. From those taken to trial, eight victims were minors between the ages of 13 and 15. In 2014, the sale price a family would cash in selling their child to a begging gang in Spain was between 1,000 and 1,500 Euro.

Vans in Madrid drop off beggars at crowded areas within the city centre at seven A.M and pick them up in the evening. These include old and disabled people - many of whom could not come to Spain on their own. The Catholic Charity Esperanza details one case of a woman and teenage child forced into begging.

“They had to work for 12 hours in the same place every day, and to obtain 50 Euro every day. If they failed - they were not given food, or were beaten up,” says Marta González, general coordinator at Esperanza. 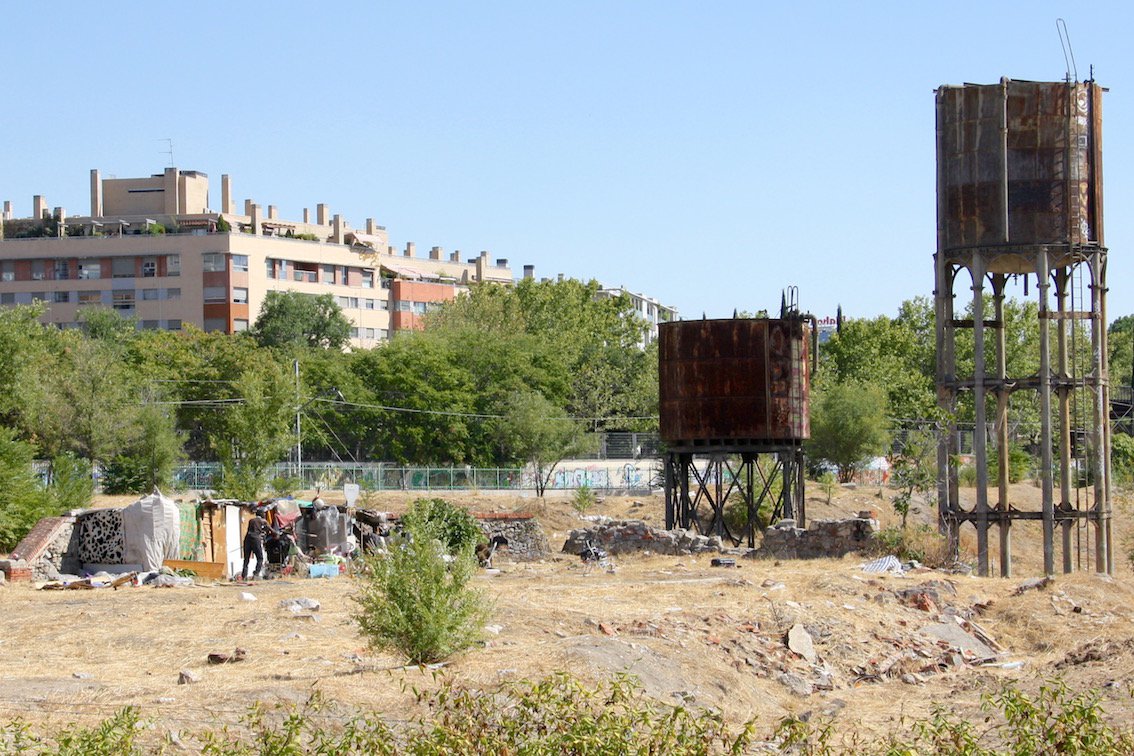 Fruit loot: In the middle of ironing a blanket, Romanians left for Seville to pick grapes for cash (picture: Michael Bird)

But among the Romanian beggars of Delicias, the atmosphere is calm, and there are no kids or gang bosses, claim the residents. On the other side of the footbridge, two men are sitting outside a shanty-hut. One is large, almost bald, with blonde-hair, blue eyes and thick black tattoos, the other is smaller, pockmarked, his eyes damp and red. He is smoking red Pall Malls and holding out his thumb, which is bloody, and wrapped in a bandage.

When we arrive, a girl in her twenties hides behind a curtain to a hut, guarded by a plastic white pony.

These men are Florin and Florin. Both are from Craiova. They don’t want to talk to journalists. But they let us pull up a chair and speak to them - because we 'are Romanian'.

The big Florin says he cannot work in Romania - and he shows us a scar that has cut into his ankle.

They arrived here three years ago. How do they make their money?

“Here we find a piece of metal or we beg,” says Florin.

They says they can earn 400 to 500 Euro in a month from their activities. But even if they manage six to ten Euro every day, “it’s pretty good”.

Both Florins say they don’t steal. “The cops would kill us if they caught us,” says big Florin.

There is no running water, nor is there electricity, but the larger Florin days he does not need it. “We arrive at ten at night and we go directly to bed,” he says.

On this wide abandoned railway siding squat people from around the world. There are Spanish, Romanians, and Turks (although no one here is quite sure they are Turks). But each group keep to their own separate shanty community, and the Romanians here don’t even know how to speak Spanish. Big Florin say they have no problems with the neighbours.

“We are on our field, they are on theirs,” he says.

In the shade of a tree is a black man in his twenties, sitting down, nodding and mumbling to himself. His shirt is open, and there is broad and heavy jewellery in faux-gold around his neck.

In Spanish, he is reciting the weather forecast to himself. Florin says he does this a lot. Every day, the guy makes money from begging in the street.

We ask where he is from.

Florin looks over with a mix of disdain and a faint note of sympathy.

“Somewhere in Africa…” he says.