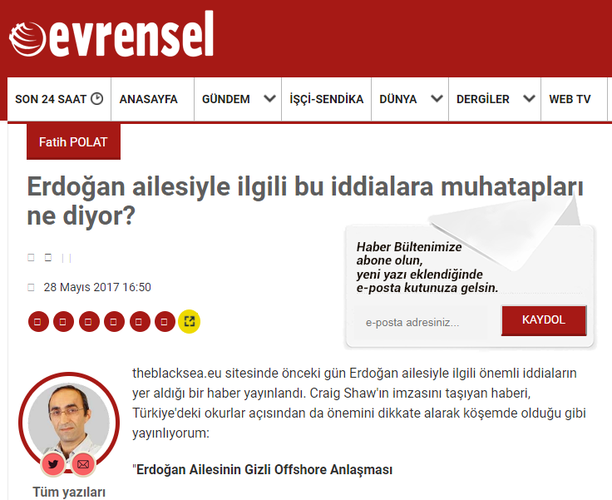 Left-wing Turkish newspaper Evrensel is planning to fight a case in the country’s highest court against a gag order demanding it removes content from its website detailing the The Black Sea's report about the secret business dealings of President Erdogan's family.

On Tuesday 11 July, the publication lost an appeal to keep the article's contents online in a court decision that came with no legal justification.

“Any article, critique, news story that is against the Government faces an immediate takedown order,” she said in a statement. “These orders come so fast, that there will be nothing on the web criticising the Government. This is very dangerous for the freedom of the press.”

The #MaltaFiles story, which details the Erdogan family’s hidden of ownership of a 25 million USD oil tanker, was originally published by EIC members in late May.

Evrensel’s editor, Fatih Polat, republished the article in its entirety with the title “What does the Erdogan family say about these allegations?”

The Istanbul 14th Penal Court of Peace then issued an order shortly after, at the request of a state prosecutor and an as-yet-unknown complainant, forcing the paper to remove the story from its website. Then access to the specific web address of the article was blocked by the Information and Communication Technologies Authority (ICTA), a body which censors the internet in Turkey.

The court provided no details on what legal grounds it took its decision to issue a take down order against Evrensel. It occurred around the time that another Istanbul court issued an order blocking stories on the blacksea.eu site revealing the wealth and assets of Prime Minister Binali Yıldırım’s family. This injunction was made at the request of the Yıldırım family lawyer.

Evrensel challenged the gag order in the Court of Appeal, but on Tuesday 11 July the court denied the media's request to lift the ban.

Again the court gave no arguments for its decision, and instead issued a one-line statement:

“The appeal is to be rejected.”

The website claims that the Turkish courts are greenlighting all requests from Erdogan and his closest political allies - the Justice and Development Party (AKP) - without using legal arguments.

In a statement issued on its website, Evrensel’s lawyer Devrim Avci said:

“With this last verdict, the ruling is final, which means the content will be removed. This is how the courts work, they work to obstruct justice. They rule, then you appeal and they reject your appeal with only one sentence, and without any legal reasoning… If the request comes from the government or people close to the government, these content removal requests are automated. No appeal is ever accepted.”

This is in stark contrast with the official line of the President. In a recent interview with German newspaper Die Zeit, Erdogan stated: “Our judiciary is independent…And we are talking about an independent judiciary, an impartial judiciary. And it does what the constitution of the Turkish Republic and its laws require of it.”

Evrensel says it now plans to take its case to the Constitutional Court, Turkey’s highest judicial body, to argue that the Turkish public has a right to know about the secret financial dealings and wealth of Turkey’s politicians and business elite.

The appeal is an important test case for freedom of speech. It will show the courts’ ability to uphold the law and act independent of Turkey’s president. At the same time, it will offer insight into the current state of the country’s press after years of Erdogan's aggression, which intensified after last year's failed coup against his leadership. Now Turkey is the country with the highest number of jailed journalists in the world.