Participants in the Turkish branch of global U.S. media brand called for a criminal investigation into journalists reporting on Turkish President Erdoğan 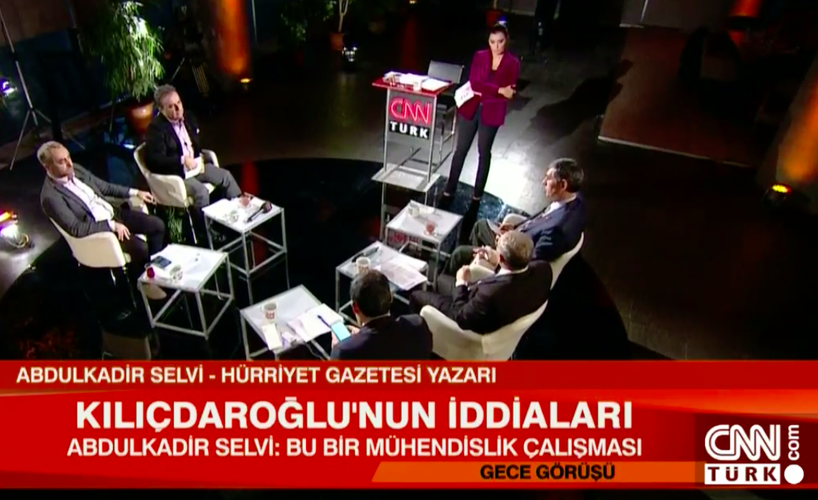 During the programme, both the panel and Fırat repeatedly accused The Black Sea of crimes such as colluding with ‘dark forces’, foreign intelligence agencies, and an organisation called Cemaat/FETÖ, which follows the self-exiled Turkish ex-preacher, Fethullah Gülen.

Cemaat/FETÖ is identified in Turkey as a terrorist group linked to the failed 2016 coup against the Erdoğan regime, and has a history of leaking (fake and genuine) documents designed to play political games and discredit its enemies.

These accusations were made without any evidence. Many of the panelists, including the host, concluded that The Black Sea and its journalists should be criminally investigated by a Turkish public prosecutor.

The CNNTürk show was prompted by a party group meeting held that day by CHP, Turkey's main opposition, where its leader, Kemal Kılıçdaroğlu, announced he was in possession of financial documents proving the President's family was involved in offshore business. The party has since released these documents to the public.

The Black Sea became involved in the scandal, and Thursday's debate, because the CHP's documents relate to a company called Bellway Limited, based in the Isle of Man.

We wrote about this company in May 2017 in an article ‘Turkish President Erdoğan's family in secret offshore ship deal’, available here.

Bellway Limited is the ultimate controlling company in an offshore structure that hides the ownership of a 25 million USD oil and chemicals tanker called the Agdash.

The Black Sea exposed how two businessmen, Sitki Ayan, and Mübariz Mansimov, appear to have purchased the Agdash for the Erdoğan family, and that President Erdoğan's brother-in-law, Ziya Ilgen, signed documents declaring he, personally, owned these companies and the Agdash.

Other project partners included MaltaToday and The Intercept.

The Malta Files produced dozens of stories and brought together 49 journalists in 16 countries. Their reporting relates to important figures and companies, including Russian loan sharks, the Italian Mafia, and members of the Turkish elite.

Back to the show

Around 30 minutes into 'Night Vision', the panelists and host began discussing The Black Sea's Malta Files reporting from May. We were not told in advance that our publication would be the subject of discussion or any accusations, meaning we had no chance to properly defend ourselves.

At no point over the next hour did the participants address the specific details of our reporting. Instead they each speculated about our identities while hurling false accusations about our role in the current 'Bellway/CHP' scandal.

The accusations against The Black Sea and its journalists included:

All these allegations are false.

During the programme, I attempted to contact two of the panelists, by Twitter and by phone. This was done in Turkish, with the help of a translator since I don’t speak Turkish. I made this move to clarify who was responsible for the reporting on the Erdoğan family's offshore activities and give information about who is behind The Black Sea.

Secondly, I wished to stop the programme participants' wild speculation from leading to the false and damaging conclusion that our publication was allied with FETO and/or foreign powers.

This intervention did little to help.

Despite my intervention, the panel and the host then unanimously called for an investigation into each of these allegations by the Ankara prosecutor (who is now set to probe CHP and Kılıçdaroğlu); allegations that the panel and host had themsleves fabricated during the programme, all completely without evidence.

CNNTürk is 50 per cent owned by Turner Broadcasting System Europe (and 50 per cent by the Dogan Media Group), and should thus abide by the ethical principles of its brand.

These state that “integrity and accuracy are of the utmost importance to the [CNN] brand, and systems are in place to maintain them. For example, stories are thoroughly reviewed by producers and particularly sensitive stories are reviewed further by a team of senior editors, standards and practices specialists, and lawyers before they are broadcast.” It seems that none of these principles were respected during the creation and broadcast of this edition of ‘Night Vision’.

To call for a criminal inquiry at a time when the Turkish state and judiciary does not respect the legal rights of journalists is scandalous. This entire programme and those involved are an embarrassment to journalism.

In response to this, we would like to set the record straight, and explain who runs the Black Sea and what our goals are.

A Community for Journalists

‘The Black Sea’ (formerly known as ‘Around the Black Sea’) started in 2011 as a travel blog by Romanian journalists Ștefan Cândea and Petruț Călinescu. It became a regular website in 2013, and has since evolved to publish in-depth investigations and reportage from the Black Sea region and beyond.

Its main aim is to build a community of talented investigators and writers, coders, photographers, artists, as well as offering a space for journalists to publish important reporting which is too difficult to publish elsewhere.

Since 2013, The Black Sea has published reports in and outside its titular region: 33 stories relate to Romania, and the other articles refer to Moldova (11), Turkey (14), Ukraine (5), Russia (1), Georgia (7), Armenia (2), Slovakia (2), plus stories on Uzbekistan, Kazakhstan, Luxembourg, Angola, Lithuania, as well as Italy and Sao Tome and Principe.

The reporters and RCIJ/TBS have been the recipient of numerous investigative journalism awards and nominations. The Malta Files, including the reports into the Erdoğan family, is currently on the shortlist for the British Journalism Awards 2017 under the category of 'Investigation of the Year (Global)'.

The Black Sea was established using a grant from the German Marshall Fund, but has had no core funding since 2013. Its work is financed through the freelance work of its journalists, voluntary contributions, and small one-off project grants.

The Black Sea's work on Malta Files was financed with a "cross-border" grant from JournalismFund.

How Journalismfund chooses to spend its money is determined by an independent jury of investigative journalists who spend weeks assessing applications and select based on merit and feasibility. This is undertaken with no outside interference whatsoever and Journalismfund is scrupulous about this.

Neither Journalismfund or the jury has any influence or input into the editorial policy of The Black Sea or its content. The Black Sea-sponsored projects often fail to win funding from this source.

Our work on Turkey: Taking a Professional Attitude

The Black Sea and the Romanian Centre for Investigative Journalism has a history of investigating governments, corporate corruption, intelligence agencies and organised crime without bias. We have also investigated Gülen activities in Turkey.

Neither is The Black Sea the source of the documents obtained and released by the CHP and we do not collude with the political party, nor have we shared any of our documents with them in private. We made our research public.

The Black Sea is a professional media organisation with a fair and balanced editorial policy. Before publishing the May 2017 article under debate in the CNNTurk broadcast, we contacted all the individuals cited and provided a right-to-reply. This included the Office of the President of Turkey. We received no subsequent complaints, demands for corrections, or legal threats.

The Black Sea stands by the integrity and accuracy of this text, and the honest intent in which it was written: to reveal the truth about the secret business of the family of the President of Turkey.

The current climate of fear for journalists in Turkey has all but destroyed investigative journalism, especially that which targets the government.

Journalists, too, have done significant damage to the industry by failing to defend each other when the state persecutes and intimidates the media, forgetting that those who today criticise and accuse journalists may one day need the support of their media colleagues.

For CNNTürk and its panelists to call for an criminal investigation into fair and balanced journalists undertaking honest work only helps the state kill off a trade that is already mortally wounded.

It failed to follow professional standards in verifying information, and instead made false accusations, spread gossip and criminalised journalism, all without providing a proper right-of-reply or evidence. In doing so, CNNTurk and its panelists are active and willing participants in the charade and weakening the journalism industry in Turkey, which only serves power.