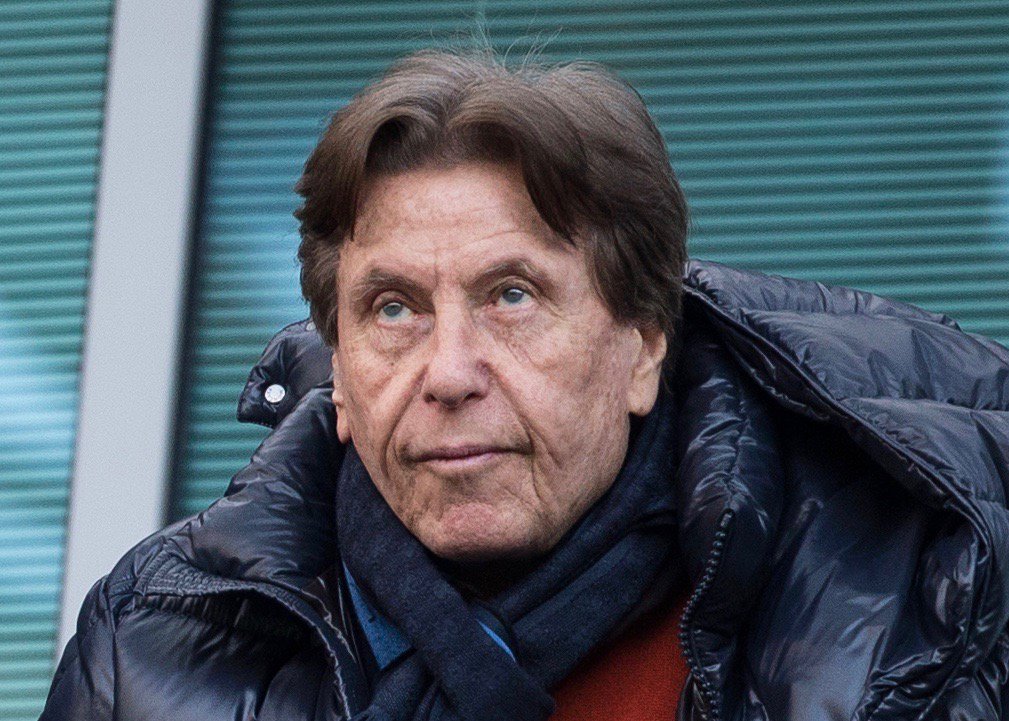 UPDATE: On the morning of 14 November, Belgian police searched several houses, the local FA and Court of Arbitration for Sport, in an investigation to determine the way club Royal Excel Mouscron has won a license to play in the top tier of Belgian football in the last three years.

The suspicions relate to potential forgeries, use of forgeries and fraud, according to the Federal Public Prosecutor's Office. There are also suspicions of money laundering, and Mouscron is suspected of being supported by millions of euros in illicit funding from offshore companies.

Directors at the club also faced questioning. The history of the controversial shareholder structure of the club, which Israeli superagent Pini Zahavi bought in 2015, is also under investigation. Zahavi officially exited the club in early 2016, but below we can reveal how his influence continued.

Israeli superagent Pinhas 'Pini' Zahavi's control over the Belgian football club Royal Excel Mouscron is under focus, due to newly released emails revealing he was the apparent decision-maker at the club, against the rules of the Belgian FA.

Today the Belgian club states that Zahavi - renowned for helping organise the Roman Abramovich takeover of Chelsea - has no influence over its management.

But during the 2016-2017 season this was not true, according to Football Leaks documents obtained by the German news magazine Der Spiegel, and shared with The Black Sea, De Standaard (Belgium) and their partners in the European Investigative Collaborations (EIC) network.

When he was owner of Mouscron in 2015, Zahavi transferred Romanian and Serbian players from another club, Apollon Limassol in Cyprus, where he also had a degree of control, thus overseeing a closed loop between a feeder club and receiver club.

But in January 2016, Zahavi officially sold Mouscron. This sale allowed the club to gain a license for the 2016-2017 season, as new rules by the Belgian Football Association stated that agents could not own clubs in the top Jupiler Pro League, as this was a conflict of interest.

Nevertheless, six months after Zahavi's apparent departure, the league's CEO, Pierre François, emailed Vadim Vasilyev, the vice-chairman of AS Monaco, about the business opportunities in Belgian football. At that time Monaco was looking to buy a Belgian satellite club, and François wrote to the vice-chairman about issues concerning Royal Excel (RE) Mouscron:

“It seems clear to me that RE Mouscron in its current configuration, because of the new texts of the Federal Regulations, will still have difficulties in obtaining the Licence [for the Jupiler Pro League]…I can only recommend that you start this discussion live with P.Z. rather than via intermediaries.”

Eventually Monaco would buy up fellow Belgium club Cercle Brugge, but this email reveals that, according to François, it was P.Z - Pini Zahavi - who was pulling the strings at Mouscron.

Pini to the Rescue

In the summer of 2015, after half a decade in financial limbo, Mouscron was bailed out with €8.5 million by a Maltese company, Gol Football Malta Limited, closely connected to Zahavi and his colleague in the Balkans, the Macedonian intermediary Fali Ramadani. Zahavi's purchase was widely reported, and the rumour was that Zahavi would use his Chelsea links to “blood” players at the Belgian side.

At that time, owners of the rights to players were looking to purchase clubs to circumvent the FIFA ban on Third Party Ownership (TPO) - where a footballer is not owned by a club, but by an investment fund, which can sell the player whenever his value increases. This practice was criticised as a form of “modern day slavery” by UEFA president Michel Platini, and FIFA banned TPO in January 2015.

But one way around the rules was to buy a club, transfer players to this club, and then loan them out, thus keeping a de facto control over the footballers.

Four months after the TPO ban took effect, Zahavi bought Mouscron. It is not certain if the two events were connected.

In the summer of 2015, a bizarre transfer scheme took place between the Cypriot club Apollon Limassol and Mouscron.

Apollon is based in the seaside city of Limassol, and is known as 'The Russian City' due to its recent influx of expats from the ex-Soviet Union. One of the shareholders of Apollon, with 16 per cent, has been Sliva Trading Limited, an offshore company owned by Zahavi, according to an agenda understood to be from a shareholders' meeting. A former official at Apollon told The Black Sea that, in 2016, Zahavi's finances were “keeping the club afloat”.

Apollon has been a transit point through which Eastern European club officials traded their talented players. The amount the Cypriot club paid for the footballers was often much lower than the final price tag from the big western clubs. After moving to Limassol, players were further sold within days to richer clubs, but the profit stayed with the investors in Cyprus, which included Zahavi.

On paper, Apollon signed up players, but they never took to the field, and in at least one case, they never even went to Cyprus. This risked Apollon Limassol being called out by FIFA as a “bridge” club, which acts as a 'conduit' between two other clubs for transfers, and where the player never gets his boots dirty.

Just after Zahavi's buy-out in 2015, at least four 'Apollon' players ended up in Mouscron, including Serbian midfielder Marko Pavlovski and Romanian defender Cristian Manea. Colorado Rapids player Shane O'Neill was also sold, on 7 August 2015, to Apollon for an undisclosed amount. He made no appearance for them. Three weeks later he signed for Mouscron on 31 August 2015. He made no appearance for them either. Serbian defender Nikola Aksentijevic signed a secret contract with Apollon in August 2012, and was loaned to Mouscron in the summer of 2015.

Asked if Zahavi had influence over any other clubs in Europe or further afield, an agent stated to The Black Sea in 2016: “These two are only the ones the media know about.”

Belgium's licensing committee was watching Mouscron and Zahavi with suspicion. In December 2015, the FA tightened the conditions for clubs to play in the top league, forbidding the top tier from having close links with agents, as this was a conflict of interests. The scheme that Zahavi and Ramadani set up in 2015 with Mouscron via Gol Football Malta was no longer possible.

But Zahavi and Ramadani concealed their influence over the club from Belgian football. In January 2016, Gol Football Malta sold the club for a ridiculous fee of ten Euro to another Maltese company, Latimer International Limited, owned by Zahavi’s nephew Adar.

This was only a cosmetic sale, argued the rival clubs in the league. Mouscron denied any foul play.

However Swiss agent Marc Rautenberg, a confidant of Zahavi, remained on the board of the club. FIFA rules ban player’s agents acting as club officials - so this was another outrageous conflict of interest. Rautenberg's presence in the club structures was denounced in 2016 by rival clubs in Belgium. In February, the Swiss agent resigned from the board.

So the Belgian FA commission saw no evidence that Zahavi was the de facto owner, and awarded Mouscron a licence to play in the 2016/2017 season.

But more than six months later, Pierre François, the CEO of the Pro League, apparently knew better. On 29 September 2016, when talking to Monaco about buying Mouscron, he told them to negotiate directly with Zahavi. Pini Zahavi. Not Adar.

Zahavi himself, who officially had exited Mouscron in January 2016, sent to AS Monaco vice-president Vadim Vasilyev on 1 November, details of the share purchase and investment into Mouscron, forwarded from Marc Rautenberg, who had CC-ed Fali Ramadani, indicating that this trio still held sway at the club.

Trust u are well‎ my friend.

I am flying to HK on thursday. Will come to c u upon my return.

Vasilyev and the general manager of Monaco, Filips Dhondt, acted on the suggestions of François. They visited Mouscron and were warmly received. In an email from 17 November 2016, they thanked Zahavi for the “excellent welcome”.

Approached last week, the club claims it has no knowledge of this discussion. In a statement to EIC Network, Mouscron declared: “The new management represented by Patrick Declerck, president and Paul Allaerts, general manager, took office in early July 2016. At that time, the club belonged to the Latimer company headed by Mr. Adar Zahavi. With regard to the exchange of mails between Mr Pini Zahavi and Mr Vadim Vasilyev, the current management of the RE Mouscron has never been informed of this correspondence.”

The next year, Mouscron received a license for the 2017/2018 season. The commission seemed to have no proof that Mouscron was in the hands of Zahavi at that time.

Today Mouscron is owned by an Irish company, Bogo Limited, under the Thai businessman Pairoj Piempongsant

The links to Zahavi and Radamani are weaker. Piempongsant has a good business relationship with Zahavi. In the mails that Pairoj and his son 'Pete' exchange with the Israeli, they speak to him with the familiar title of 'uncle'. The current sports director of Royal Excelsior Mouscron Jurgen Röber is connected to the right hand of Zahavi, Fali Ramadani, with whom he worked in Berlin in the late 90s.

Pairoj Piempongsant is now an investor in Greek Club Panathinaikos and wants to sell half his shares in Mouscron. The club itself is in the relegation zone of the Jupiler League, which is not an uncommon position for the team.

De Standaard asked Pierre François, the CEO of the Pro League, why he recommended AS Monaco to speak directly to Zahavi six months after the Israeli sold the club, even though such influence seemed to be against the Belgian FA's rules.

“We as part of the Pro League contribute to making the rules,” said François. “We are not the ones who have to apply them. The license commission and the BAS [Belgium Court of Arbitration for Sport] decide that independently… I have no authority over that. But I am entitled to my own opinion. I am not an idiot. I knew Pini Zahavi was in the constellation around Mouscron.”

Zahavi himself would not respond to questions on the Mouscron issue.