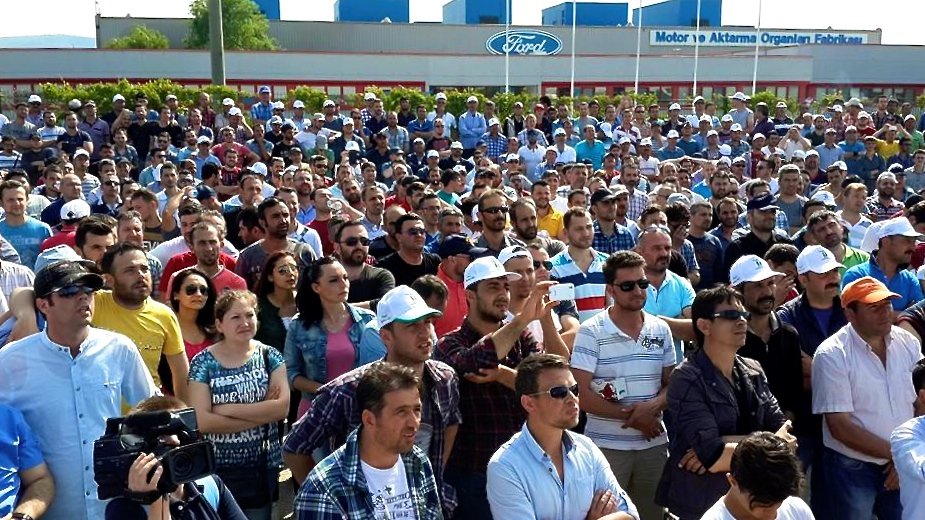 For six years Emre Cevizoglu worked at a factory outside Ankara controlled by Italian multinational Fiat and one of Turkey’s wealthiest families. "It was incredibly busy and heavy work,” Cevizoglu tells The Black Sea. “There was so much pressure. The management kept making workers do more shifts. Our workload was three to four times heavier than it used to be, but we were earning little more than the minimum wage [425 Euro per month].”

In May such conditions led him - and forty thousand other metalworkers - to launch one of the biggest ever strikes in Turkey. The protest targeted international companies like Renault, Fiat and Ford, as workers fought for better wages, humane conditions and their right to organize. But many in the management of these western household names were not looking to bargain - within weeks Cevizoglu was fired by text message for striking.

Around one thousand workers across the country lost their jobs when the two-week strike ended, say unions - often via text message. Many never received the severance pay required by law. The company Cevizoglu worked for is Türk Traktör, majority owned by Fiat and the Turkish Koç Holding, managed by one of Turkey’s wealthiest families, with an annual revenue of about 20 billion Euro.

The company boasts that it produces every second tractor in Turkey, and exports to more than 100 countries. But Türk Traktör, along with Ford, receives massive amounts of money from a European publicly-funded bank with a mandate to promote “socially sound” sustainable development.

Since 2010, the European Bank for Reconstruction and Development (EBRD) has provided hundreds of millions of Euro in loans for Turkey’s metal and automobile industries - including 75 million Euro for Türk Traktör, and nearly 300 million for Ford Otosan - a subsidiary of the American multinational car company, again jointly owned and operated by Koç Holding.

In May the EBRD approved - though it has not yet signed - a 200 million Euro deal for Tofaş Türk Otomobil, co-owned by Koç Holding and Fiat, to “finance the development and the launch of new hatchback and station wagon passenger cars.” On paper, the EBRD requires its loan recipients to respect workers’ rights. But with its number of Turkish clients fast-growing, these commitments are now being tested.

The EBRD is at the center of the dispute, with workers at all three companies saying the actions of their bosses contradict the bank’s promise to honor labor rights. Earlier this month, Birleşik Metal, and independent Turkish metalworkers union, filed the first ever labor complaint with the development bank’s headquarters in London.

“The EBRD has a responsibility to make sure the basic workers' rights are guaranteed in their business partners in Turkey,” says Selcuk Goktas, secretary general of Birleşik Metal. “Otherwise, they will be profiting from these human rights violations and should be held responsible for them.”

The complaint states Türk Traktör has “consistently denied workers’ right to organize” and violated national labor law on overtime work leading to health problems, like musculoskeletal disorders and herniated discs, among workers “unable to meet their basic needs” with salaries of approximately 430 to 460 Euro a month.

The letter calls on the development bank to urgently intervene because the companies have violated the performance standards attached to the bank’s loans, which require that companies do not discourage or retaliate against workers for organising or collective bargaining. The complaint also addresses similar violations against Ford Otosan and Tofaş Türk Otomobil.

“We are not talking about some small local companies,” says Goktas. “These are Ford and Fiat or their suppliers, the world's major auto producers.” 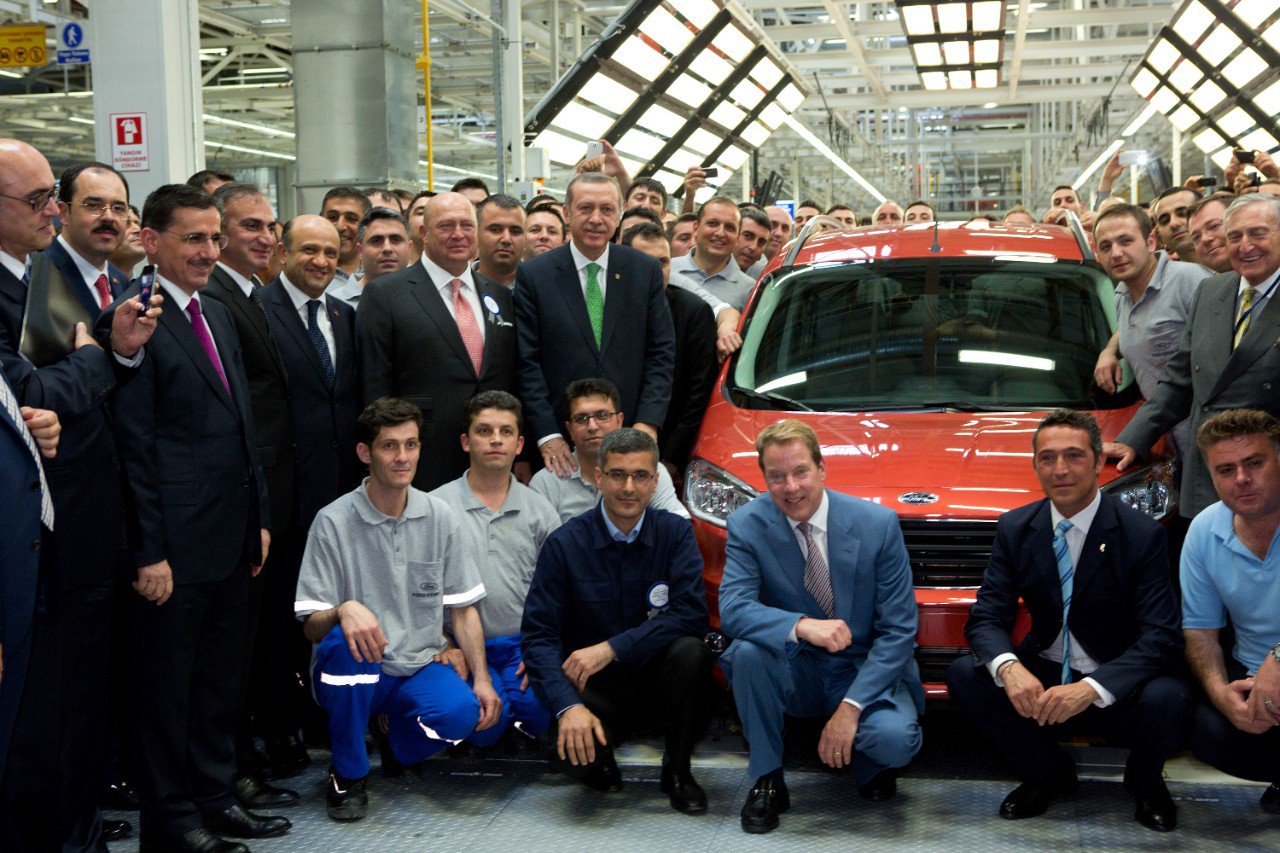 The dispute between the workers and the auto companies was ignited by the actions of two metal unions, Türk Metal and the Turkish Employers' Association of Metal Industries (MESS). Turk Metal accepted unequal pay agreements without consultation, workers told the Black Sea. This action led people to the streets.

“The strikes started at Renault’s car plant in Bursa, and then jumped from factory to factory until it reached us at Türk Traktör,” said Cevizoglu. “At first, the Türk Traktör management was very surprised,” he continues. “This was the first strike in the history of the factory so they approached us positively in the beginning.”

That changed when the employer’s union, MESS, began negotiating with the workers. “When we rejected MESS’s terms, they got brutal,” says Cevizoglu. “We were in the factory's backyard and they put a wire cage around us and trapped us inside. They called and texted our relatives saying ‘your son is doing something illegal, he will get fired. You need to watch out’. It was psychological pressure. “Then we got fired,” he adds.

At Tofaş, Birleşik Metal says the company fired 82 workers after the strike and “forced other workers to sign a paper [saying] that ‘I am accepting to be dismissed without severance pay if I join demonstrations again’”. Another 120 workers, the complaint says, were dismissed from EBRD-financed Ford factories.

Thirty-two year old Yunus Sirmen worked for more than eight years as a welding operator at Ford’s sites in Yenikoy and Golcuk before being sacked in June, again without severance pay. “Ford has been quite aggressive towards us,” says Sirmen. “Friends still working there say there is still a lot of pressure. The conditions are harsh. The shifts are so heavy and yet management will say five minutes before the day ends that workers must do another full shift.”

According to a Ford insider still working in the company as a non-metal worker, who asked to remain anonymous, Ford’s staff were using social media sites to spy on the workers. They told The Black Sea that “Ford managers told non-striking workers and office staff not to share or post anything on social media that would show their support for the strikes.

“The Human Resources Department would go to the social media pages of workers striking and look who ‘liked’ the posts and who ‘shared’ them,” he adds. “They looked at everyone. They looked at those who were more active and that’s how they got rid of most of the workers.” 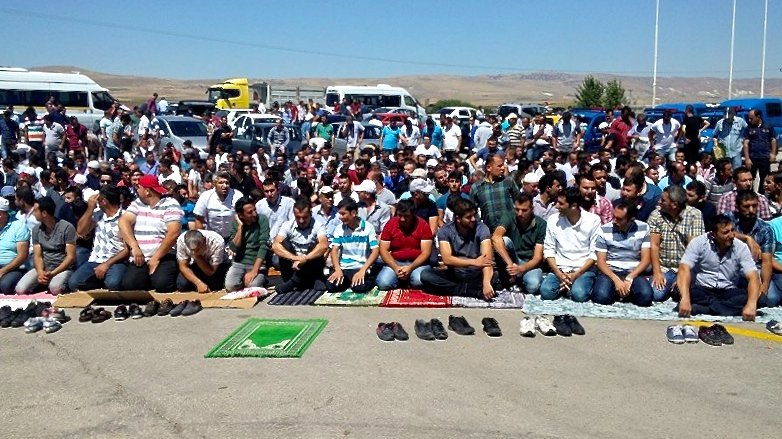 Protesters at ORS-Renault take time out to pray

The EBRD was founded in 1991 to “create a new post-Cold War era in central and eastern Europe” by helping former Eastern Bloc countries transition to free market economies. Today the bank is owned and financed by 64 countries (including Turkey), the EU and the European Investment Bank and also invests in companies in central Europe, north Africa and central Asia.

Member states have contributed billions of Euro of public money to the EBRD’s coffers since its founding, to “promote environmentally and socially sound and sustainable development” by investing in private businesses. The EBRD has been criticized for labor rights abuses in businesses it has funded before -- including its financing of German supermarket chain, Lidl, to expand in east Europe. But this is the first time an official labor complaint has been filed through the bank’s internal grievance mechanism.

Turkish unions and NGOs also claim that in recent years the Turkish state, under the governing party the AKP, has increased its crackdown on union activity and legislated to erode safety regulations and worker rights. The country has the highest worker accident rate in Europe, and is currently blacklisted by the International Labor Organisation (ILO) for its assault on collective bargaining.

On Monday last week, the local police and the Turkish jandarma - military police - violently attacked the workers, and the families, of Ortadoğu Rulman Sanayi (ORS), a key supplier for companies such as Volkswagen and Bosch-Siemens, after the company called in the police to quash protests.

Here is video of police beating a protester (at 20 seconds) and forcing others away outside the demonstration.

Cevizoglu told the Black Sea that despite the strikes ending months ago, Türk Traktör remains hostile towards workers, and that former colleagues complain that the factories feel like concentration camps. “If three or four workers get together, security comes in and asks what they’re doing, what they’re talking about and tells them to move on,” says Cevizoglu. “They’re still firing people. They do it slowly, firing five people at a time. They have become more aggressive. It is as if the factory management is trying to take revenge.”

The workers who remain do not feel secure in their workplaces anymore, said Birleşik Metal’s Goktas. “They think that if they exercise their freedom of association again,” he adds, “there will be retaliation.” Sirmen said that after months of searching, he has only recently managed to find a new job. Getting rehired, he claims, has been made more difficult by Ford's actions. “I heard Ford Otosan sent emails to other factories, telling them not to employ 'these men',” he alleges. “They fired us and didn’t let us find another job.”

Cevizoglu has not been so lucky. He remains unemployed, without the severance pay to which he is entitled after over half a decade of committed work, in a country with no welfare system.

The EBRD’s disputes department is now deciding whether to pursue the complaint. The bank's press office told the Black Sea that the EBRD has "high standards when we invest in projects and monitor to ensure those high standards are maintained", but declined to explain what, if any, actions it had taken regarding the recent strikes, or prior to approving the 200 million Euro loan to Tofaş.

Türk Traktör, Ford Otosan and Tofaş did not respond to journalists' questions.

*CORRECTION: The original post said that strikes ocurred at Bosch. The strikes began at Renault. The story has been changed