The European Union is failing to stop the exploitation of workers in the haulage sector, and its attempts to regulate the industry highlight a clash between Eastern and Western EU members.

Rarely has an auditorium at the European Parliament (EP) been so full as on 4 June this year, when the 28-member state Transport Committee voted on amendments to the Mobility Package.

Work migration is one of the hottest topics in the EU’s legislative body, and this Package is a set of regulations designed to update the European law that clarifies the salaries and conditions of EU employees sent to jobs outside of their home countries, known as the Posted Workers’ Directive (PWD).

Originally, those in road transport were excluded from this directive. But recent years have seen a rise in transport companies moving jobs from richer EU countries to Central and Eastern Europe, fuelled by an appetite for an ever-cheaper labour force and a desire to circumvent wage requirements in their own countries.

This has triggered national legislation and protectionist measures in countries such as France and Germany, and seen an increase in court cases over drivers’ salaries across the EU.

But while the Parliament debates closing this loophole, the issue has divided the old and new countries in the 28-member bloc.

In the absence of the ability to make a decision, the politicians use the oldest trick in the book - delay.

The atmosphere in the hall is tense. Every seat is occupied and dozens of European Commission and European Council officials jostle for space around the edge of the room. The corridors outside are packed with well-tailored corporate lobbyists and trade union members wearing t-shirts and branded vests.

There is a wall of nerves, as both sides of stakeholders hope eurocrats will vote in their favour. Trade unions want to see the amendments force haulage companies to pay all truckers the same wage for the place where they drive, even if they are recruited through EU-based third-party firms or subsidiaries, and receive salaries from lower-income member states.

The big haulage firms hope any changes are negligible, allowing them to continue recruiting drivers in Poland, Romania and Slovakia, where they can pay a local the minimum wage with a few expenses thrown in, even if they move goods in high-wage countries

This practice, known as social dumping, was the subject of a recent investigation by Investigate Europe, also published in The Black Sea over the past few weeks, and highlights how the practice downgrades the labour value of all Europe’s truckers.

At the end of 2017, the European Commission launched a mobility package to find solutions to the problems of wages and working conditions in the road transport sector, among other aims. The commission hoped to wrap up the issue.

What was at stake? Upon accessing the EU, Central and Eastern European countries were compelled to liberalise their haulage industry. This meant that low-wage countries and their smaller transport companies had to compete with well-off or established rivals in the single market.

Suddenly, western European states were faced with new transport players armed with a much cheaper workforce.

To maintain their competitive edge and protect their profits, western haulage businesses started outsourcing jobs to Eastern Europeans, both inside the EU, and from outside its fringes, especially from Ukraine, Belarus and Moldova.

The transportation of goods, such as premium cars, is now done on the cheap, using employment contracts which would be illegal in the countries where the trucking takes place. For example, a Polish or Romanian driver on the roads of Holland is not being paid a Dutch wage, but one from his or her home country. The practice helps keep new models in the showroom affordable, but there is a cost to both workers, and to health and safety.

Trade unions in the east, such as the Romanian Transport Workers Union (SLT), accuse Western businesses of unfair wages, treating workers poorly, and failing to provide proper health insurance, and have begun to support court cases against the haulage giants.

In the west, unions such as Unite in the UK, and FNV in The Netherlands complain of rising resentment among drivers in their own countries, who witness a fall in their wages because employers prefer cheaper drivers from the east.

They argue that companies should ‘level-up’ the playing field by increasing drivers’ salaries, rather than level down.

Back in Brussels, the mobility package has resulted in the creation of warring factions. Western European states and its MEPs have formed the Road Alliance, an initiative that attacks Eastern European member states for what it deems unfair competition and social dumping.

In response, Eastern Europeans have set up the Visegrád Group, comprised of the Czech Republic, Poland, Hungary, Slovakia, who were later joined by Romania and Bulgaria to fight their corner. This bloc claims that stricter rules, low budgets and higher costs undermine their ability to compete.

At first, the ‘Mobility Package’ was heavily in favour of the companies. This was detrimental to drivers’ working conditions. In one example, the European Parliament committee TRAN proposed allowing drivers to spend their mandatory 45-hour weekend break in the cabin of their truck.

This motion, drawn up by Wim van de Camp, a Dutch politician associated with the European People’s Party, contravenes the ruling of the European Court of Justice that forbids the practice.

TRAN also proposed that drivers would no longer take a longer weekend break every two weeks, but every four weeks, which could mean almost a whole month on the road, with shorter resting times.

It is custom for the European Parliament to negotiate on committee proposals. In July this year, however, a month after these were submitted, MEPs told TRAN they had rejected its proposals and sent them back for reconsideration.

Further announcements were expected in September, but were postponed for early October. But when the date came around, TRAN failed to present any progress. Its opinion is now not expected until the time of the European Parliamentary Elections in May next year. 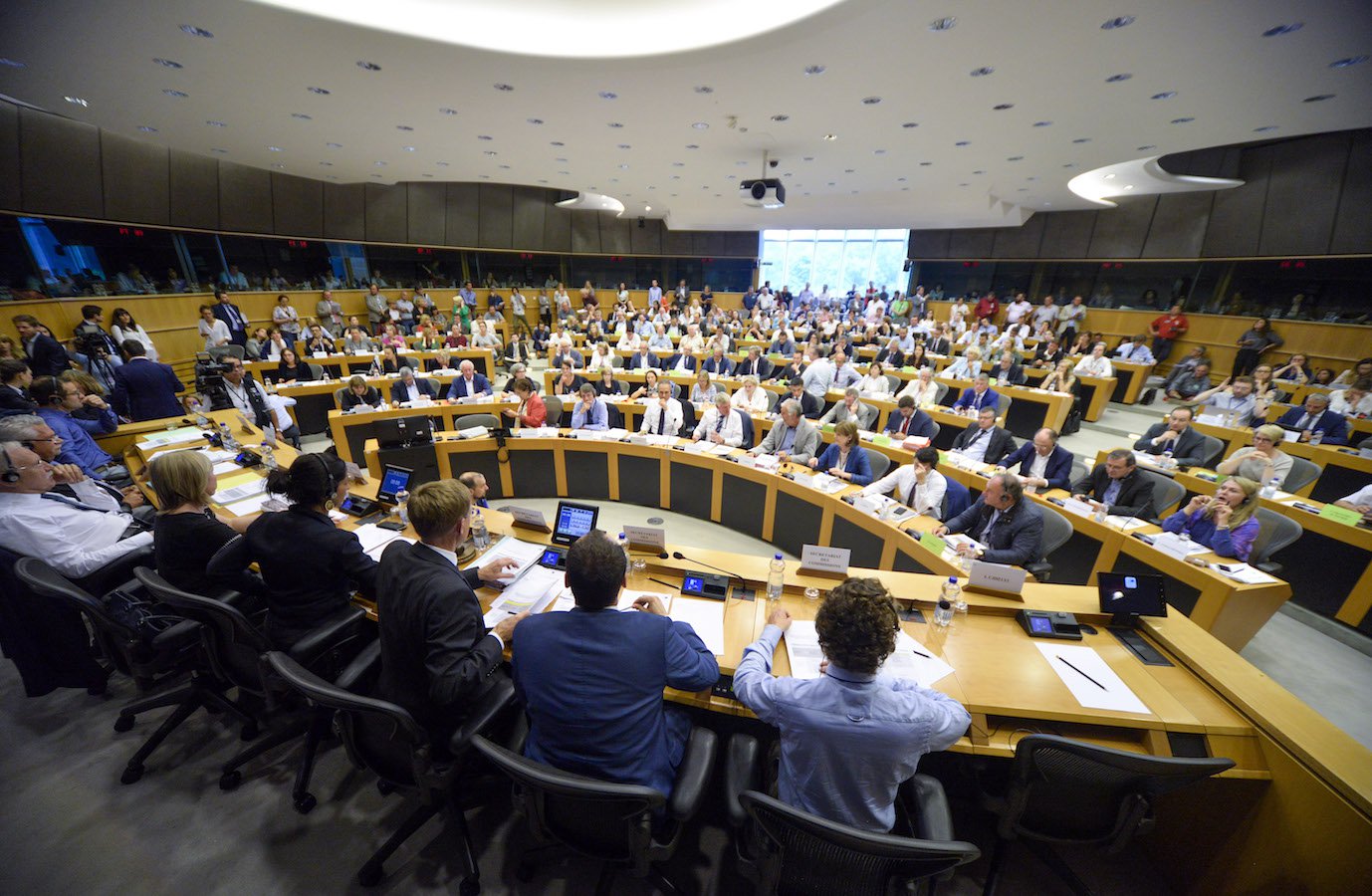 Stalled in the European Parliament: No decision on Truckers' wages until May next year (Picture: Transport Committee, 4 June 2018, Dominique Hommel/EP)

“We’ve been a scapegoat for social dumping!”

“We’ve become a scapegoat for social dumping,” he says.

Dinescu points out that the argument of cheaper labour is “false” in the context of Romanian businesses, who risk losing out if the new directive votes in favour of Western European unions. Those in the Romanian haulage sector “are paid 30-40 percent less per km than western companies are,” he says, and cites “the hypocrisy of those in the West” who criticise Eastern European companies for not paying Western salaries.

Dinescu is in the middle-ground, and his views are not visibly reflected among those in Brussels. He feels the need to defend Romania-headquartered haulage companies because they often survive through partnerships with bigger companies in the west.

Life is not easy for a Romanian transport worker or company. For example, Romanian businesses are “discriminated” against, claims Dinescu. For the price clients pay per kilometre, UNTTR’s leader argues that if an automotive company pays a Dutch haulage business 1.5 euro/km, half a euro more than it pays a Romanian transport firm, over the course of a 12,000 km journey, the difference is €6,000 in favour of the Dutch. This affects what Romanian companies can offer as salaries, which often results in poorer working conditions.

The Romanian is also frustrated by the EU’s richer countries, led by Germany and France, which have started to implement national legislation to protect their market against the liberalisation imposed on the Central and Eastern European states and businesses.

The competitive advantage of Eastern European labour against Western and Nordic countries is a myth, argues Dinescu, especially when taking into account the total costs of operations. The union boss claims that western companies receive a better price on fuel, while Romanian companies pay more per litre, as they buy lesser quantities. Meanwhile the biggest initial expense - the lorries - costs a company the same in the east and the west. A Romanian insurance tax has also hit the local hauliers, as it demanded that each company pay €5,000 per lorry, Dinescu stresses.

“So tell me, as a Romanian business, how can I pay a western salary under these conditions?” asks the UNTTR leader.

“The Goal is to Eliminate East European Haulage Companies”

The fleet manager of a Romanian branch of a Dutch-headquartered haulage firm believes that most trade union campaigns, which advocated for better pay in Brussels and Strasbourg, occurred because “the western countries seek to reduce their own joblessness, and I can understand that.”

From his office in Cluj-Napoca, a major economic hub in the heart of Transylvania, the manager argues that “the western lobby has been vicious” in its attacks on Eastern European firms.

“Their goal is to eliminate the eastern companies from the scheme,” he says. “They wish to revitalise their economies… however, if they eliminate eastern companies, the shelf-price on products will increase." He also adds that a multinational haulage company’s parent company will never give a Romanian subsidiary the funds necessary to level drivers’ incomes to those of the west.

UNTTR’s leader is equally vocal about western trade unions’ lobby and the lack of finance. When it comes to the issue of competition, Dinescu pulls no punches: “It is a major hypocrisy for the authorities in any country to condescend and tell us ‘You Romanian, you need to have the same costs from top to bottom, but your profit should be 50 percent less!’”

Eastern European businesses’ complaint against Western protectionist measures are “understandable”, says German MEP Ismael Ertug. “In Bulgaria, the international transport business makes up 15 percent of the country’s GDP,” he adds, “[countries] are dependent on it.”

The EU’s institutions have been trying for three years to find a compromise on the legislation for road transport workers, and have so far failed. The EU Parliament and the council are in a deadlock, incapable of finding the necessary majority to vote in reform on the corresponding directives.

The rights of truck drivers were a bargaining chip in the negotiations for the "posted workers directive" which attempted to end the practise of social dumping. So far, Eastern European member states dropped their resistance to the general rule of "equal pay for equal work in the same place", which will affect many workers in the construction, agriculture, food processing and gastronomy industries. But the equal pay rule was not originally designed to include international road transport.

The debate rages on. Should drivers be employed and paid according to the rules of the country where they pick up or load their freight? Or should their jobs and pay follow the rules of the home country of their employer - even if it is only a subsidiary of a company based elsewhere?

After listening to hundreds of testimonials from drivers across Europe, and launching a few lawsuits, he says: “This sector is rotten to the bone.” Haulage companies that practice social dumping, adds the union boss, are “leading the way in the race to the bottom.”

Investigate Europe (IE) is a pan-European pilot project: a team of journalists who report cross-border on how EU policies impact us all. They publish with mass-media across the continent.