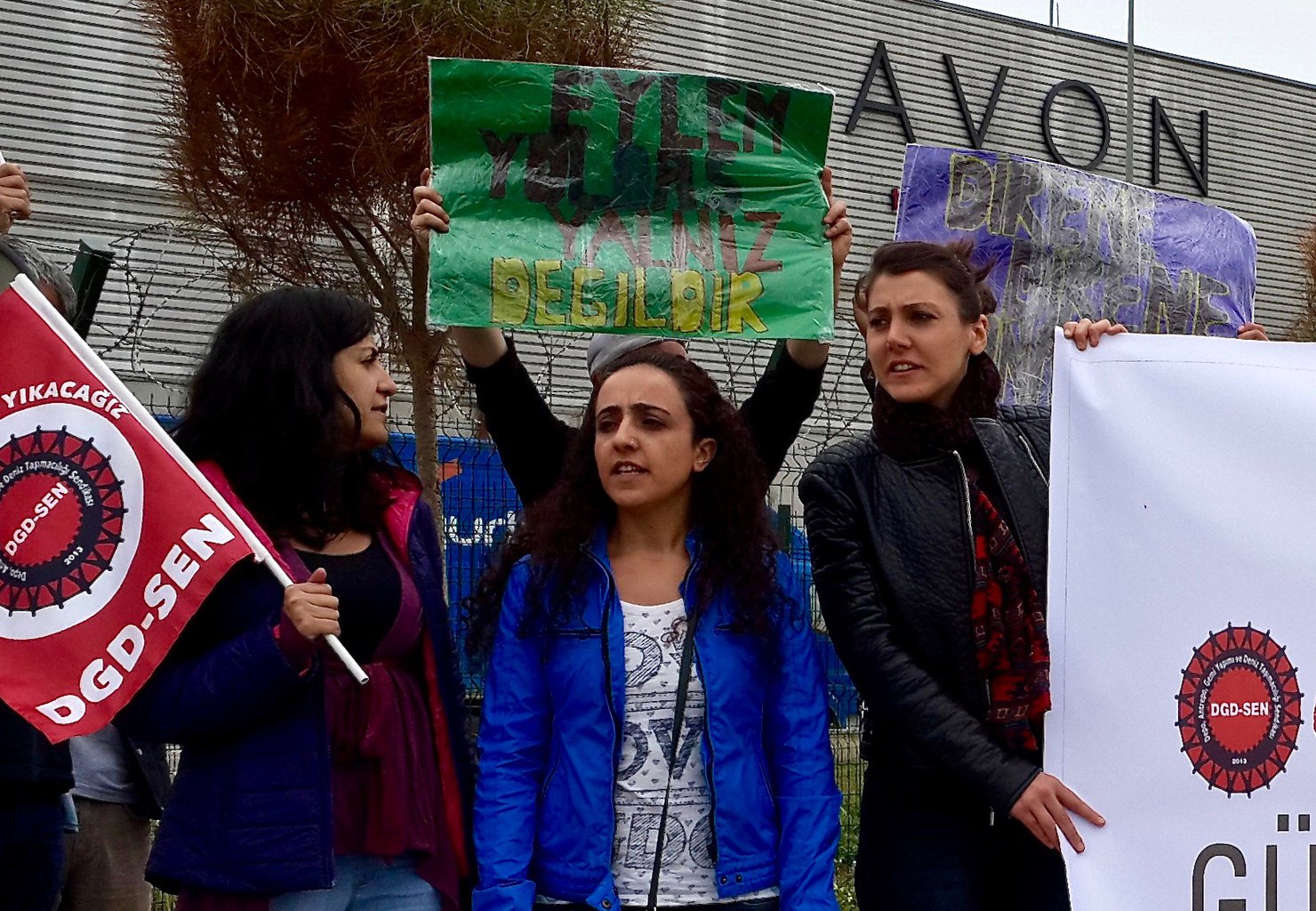 After her sacking from cosmetic giant Avon’s warehouse on the outskirts of Istanbul, 36-year old Eylem Görgü picked up a giant blue strip of canvas and four long sticks to raise a makeshift tent in front of her workplace.

She was joined by five other colleagues who had also been fired.

On a piece of cardboard, she wrote in a red pen: ‘Union-buster Avon’ and ‘Wipe off your lipstick and raise your voice’ and strapped them to a barbed-wire fence protecting the Avon hub.

Every morning, the spurned women set up a camp that staff and visitors to the American mega-corporation could not ignore. They ate, discussed and smoked in front of the warehouse. Some Avon workers joined them in solidarity.

“This was a matter of honour for me as a woman,” Eylem says in a cheerful and steely voice.

During their mammoth two-month sit-in, the women revealed the miserable working conditions endured by female workers for a global giant that trumpets its brand as ‘the company for women’.

In the warehouse, women do much of the heavy lifting of boxes of high-turnover products, physical sickness is common - and work-days have lasted over 14 hours, protesting staff claim.

“For me, this is a fight for all women working under heavy conditions,” adds Eylem, who supports her mother and sister on her wages.

The six fired workers had joined a union called DGD-Sen - for warehouse, shipbuilding and naval transport workers, and were trying to mobilise their colleagues to challenge bosses about their dire conditions.

The women were also protesting against a dodgy contract drawn up by Avon’s subcontractor, a German company named Klüh Multiservice.

The Germans gave no reason for Eylem’s dismissal until weeks later.

“Every Friday I went to the door and asked for an official meeting with Avon and Klüh,” says Eylem, “and every Friday for 64 days, I was rejected.”

Avon launched in the Turkish market in 1993 and opened its only warehouse in the country in Gebze in 2007. This functions as a hub for Avon’s range of cosmetics, jewellery, care products and lingerie, distributed to company representatives in Turkey.

Around 165 out of 223 warehouse workers are technically employed by Klüh Multiservice (the companies would not confirm these numbers). Klüh is based 2,500 kilometers away in Düsseldorf. Operational in eight countries, the company also hires cleaners, bodyguards and caterers.

It is illegal in Turkey to hire workers through subcontractors, unless the purposes of the company and its subcontractors are different.

The DGD-Sen union claims that Klüh is breaking Turkish labor law by taking on the majority of Avon’s blue-collar workforce.

“These workers are doing work for Avon, but they are not Avon employees - it is unacceptable,” says Pelin Das, a DGD-Sen union officer.

Confronted with this allegation Avon and Klüh said: “we outsource many activities which are out of scope of our core business, including warehouse and shipping activities.”

In Turkey, global brands contracting out its working class labor is common, as it can allow big names to use a third party to tacitly permit low wages, job insecurity and union-busting.

When Klüh was hired as Avon subcontractor in December 2015, its officials presented workers with new contracts that allowed the Germans to move the workers where they wanted, give them more work when they wanted, and hire them out to who they wanted.

This stipulated that Klüh can change an employee’s city of work without the employee’s approval. Klüh also had the right to “lend” the employee to any other company.

The contract required employees to work extra shifts or weekend and holiday shifts without negotiation.

“That was the last drop, then we exploded,” says Eylem. “90 workers refused to sign the contract.”

Tensions grew and the workers sought help from the local union.

On 19 May 2016, Eylem Görgü received a call from Klüh’s HR. According to Eylem, the company representative told her: “Just do not try to come in to work, they won’t let you in the building.”

Eylem started shouting back: “If you’re going to fire a worker with ten years’ service, at least do it legally.”

She burst into tears and tried to remain calm.

The next day when she went to work, the security guard told her she wasn’t allowed to enter. “Please, just go away,” he told her.

“For ten years, I went to that place everyday and put sweat into my work,” says Eylem. “I felt so worthless when they told me not to come again. I was broke. I felt so bad.”

Eylem was not a troublemaker. Her employer elected her ‘the Best Team Player of the Quarter’ 20 days before her sacking. There was even a ceremony, with Avon’s supply manager and operations manager presenting her with the award. And this was not a one-off. She had won this award before - and could add the trophy to a cabinet which includes a prize for the ‘Most Innovative Idea’.

“I was one of their most loyal and hardworking employees,” she says. “But they found out I was trying to organise the girls inside and ask for better conditions. They wanted to make an example out of me to shut up the others.”

Avon and Klüh deny the sacking had any relation to union membership. 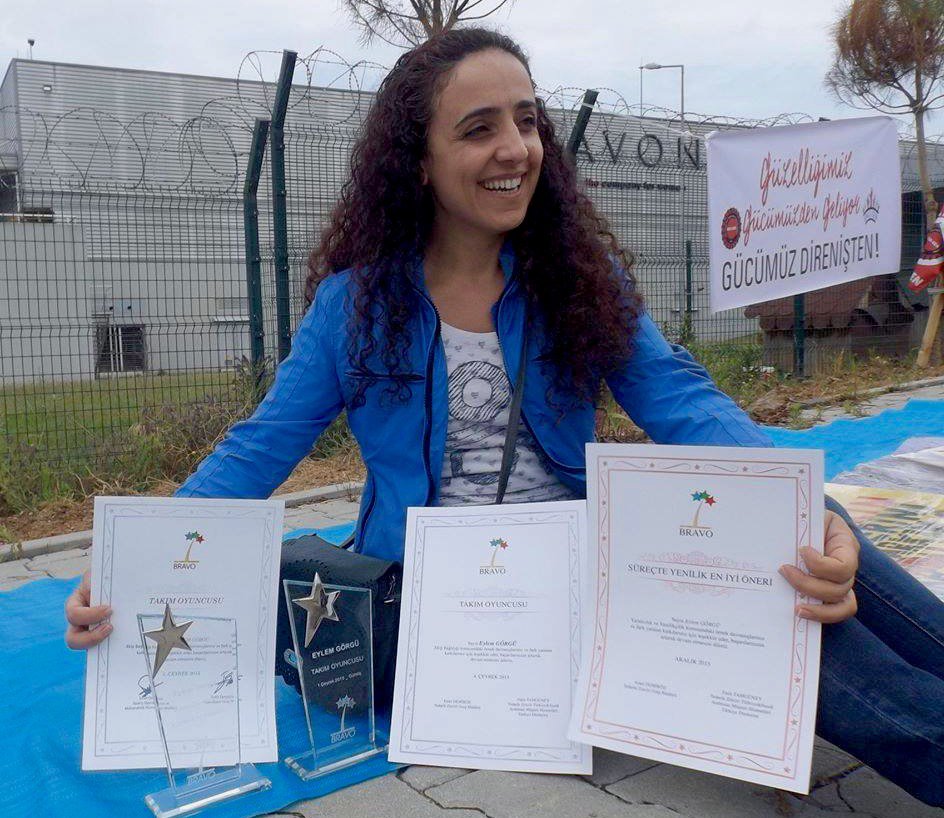 Eylem describes her work as preparing the orders for Avon products from around the world. The girls separated, handled and packaged up the make-up, hair products, perfume and nightwear.

They also prepared orders coming from Avon reps in Turkey. After a decade at the warehouse, she knew every part of the operations, and was now working as the ‘joker card’ - taking up any job that was available to make the operations ran smoothly.

Eylem would start at 7:30 am in the morning and sometimes work until 10:00 at night.

“We complained to the Ministry of Labor - so Avon had to let us finish at 8:00 pm,” she claims. “We are on our feet all day and had to lift heavy packages. Many girls suffer from back, neck and wrist problems.”

Workers claim that Avon usually cares little about these health problems. “If you say you’re ill or suffering, you really must be dying for them to let you go home or to the hospital,” Eylem says.

Confronted with these allegations, Avon and Klüh said that Avon “rigorously meets and where possible exceeds global health and safety rules and protection.”

“After ten years of dedicated work for Avon I was still making the minimum wage of 390 Euro a month,” Eylem says.

Meanwhile those workers with Avon contracts were earning double this figure, say staff.

Eylem also received no severance pay - which a Turkish employer must honour. When we confronted Avon and Klüh with this apparent breach of their legal responsibility, the companies did not answer.

After several weeks of protest, the global giant and their German subcontractor told her she was fired due to “disturbing peace at work and unethical behaviour”. This was a convenient clause for her employers to invoke, as they do not need to provide extra income after the dismissal.

When confronted with workers seeking to form unions, many Turkish-based employers use this excuse.

Over 130 years of “standing” for women

The Avon brand prides itself on a company that “for 130 years has stood for beauty, innovation, optimism and, above all, for women”.

This tagline causes Eylem to laugh.

“You know that empowerment motto is a lie, right?” she says. “Only men become supervisors in our workplace. Women do the heavy work - such as carrying boxes and lifting packages. Men just shout orders and insults.”

The union was aiming to push Avon to dump its subcontracting contract with Klüh and pay proper wages to female workers by making them official Avon employees.

“It is impossible to climb the career ladder in Avon,” alleges Pelin Das. “The women work for ten years and are still stuck with the minimum wage. But men get Avon employee contracts.”

Avon says that three quarters of its subcontracted staff are male, and that it regularly asks “for feedback from our Associates and outsourced employees regarding their working environment, communication and overall atmosphere” and that it has a ”people-focused approach”.

“Avon markets itself as the company of women, but a woman is worth nothing inside Avon,” says Eylem. “For example Avon has this breast cancer campaign. [Many of] its warehouse workers are women and the company could have said ‘let’s take you for a breast cancer screening’. But they never did.

“Empowerment should start from within. If Avon really empowered us, we would be unstoppable. Imagine the things we would have achieved if that was the case. Instead, they kicked us out.”

Crunch meeting: in a shopping mall

Eventually, Klüh agreed to meet the fired workers on 17 August.

“They wanted the meeting to take place in a coffee shop at a shopping mall, not in their offices,” says Eylem.

Three Klüh employees were present in the meeting, alongside Eylem’s union representative and lawyer. Eylem asked why they refused her requests for a talk for so long.

The operations director Zafer Koptagel told her that he wished she hadn’t brought her lawyer. Eylem kept on pushing: “Is this how much you value your employees?” She remembers how none of them made an eye-contact with her throughout the meeting. “They didn’t even answer me,” she says.

The union presented the company with their demands - to reinstate the fired workers, pay severance pay and compensation. They also demanded the union be recognised. At first, the company representatives said they would think about it.

A second meeting on 25 August was “much shorter and much colder,” says Eylem.

Klüh presented a counter-proposal of some severance pay. The sacked employees refused.

“It was full severance pay and compensation for being fired, or nothing,” Eylem says. The company representatives cut the meeting short.

Meanwhile Avon did not participate in any of these meetings and still refuses to recognise or negotiate with the elected union.

Eylem and another female worker decided to pursue this in court. They lodged a complaint against both Avon and Klüh in June.

The trial is likely to be a long process, but Eylem is hopeful. Even her name is representative of movement. In Turkish, the meaning of ‘Eylem’ is ‘action’.

“There is a struggle for women everywhere; at work, at home, on the streets,” she says. “But women who resist power and demand their rights are beautiful. They should know not to underestimate us anymore. This is my main motivation for going after Klüh and Avon.”

But she is optimistic for a resolution.

“The employers took an ill employee to the hospital with the company car the other day,” she says. “That would have never happened before. Perhaps our resistance is changing things.”