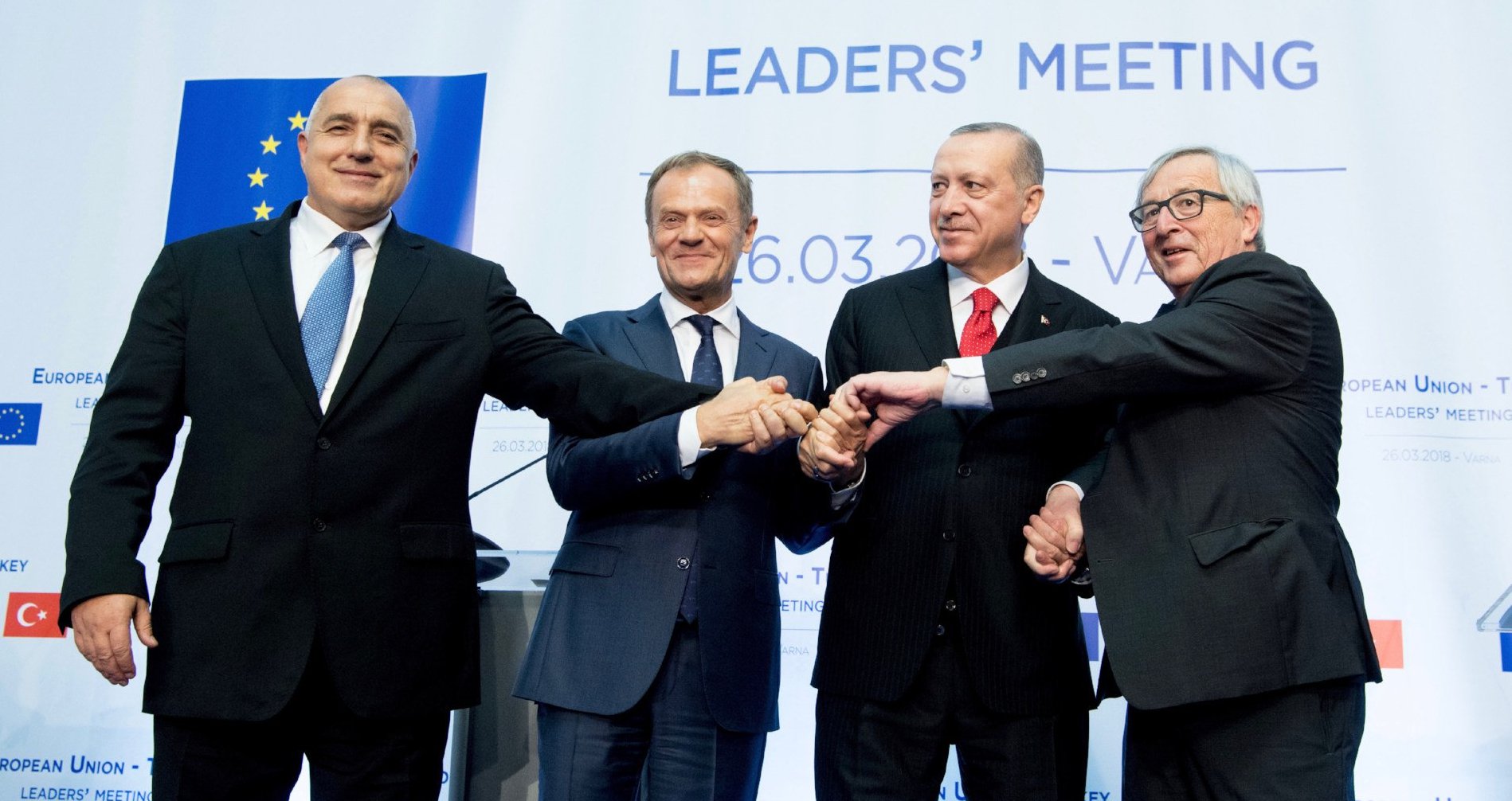 Despite a significant drop in Syrian refugees entering Europe from Turkey, member states did not want to finance the mega-deal from their national coffers, and instead asked to raid pre-accession funds or divert cash from the EU budget, according to our Billions for Borders investigation.

The EU leaders and Turkey's President Erdoğan were arguing about money.

“We can open the doors to Greece and Bulgaria anytime and put the refugees on buses,” Erdoğan told European Council President Donald Tusk and European Commission President Jean-Claude Juncker at the G20 summit in Antalya in November 2015.

When minutes of this meeting later leaked to Greek media, they painted a embarrassing picture of a terrified Europe enthralled to a combative Turkey - a country then housing 2.5 million Syrian refugees.

This conflict in Antalya stemmed from a confusion over the amount the Europe would pay Ankara under new proposal being discussed to keep these refugees from entering the EU. Juncker thought three billion Euro had been agreed upon. Erdoğan was not satisfied.

If the Juncker and Tusk were prepared to give only three billion Euro, the Turkish President said, “there is no need to discuss further”.

It had to be six billion.

Arising from these tense negotiations was the EU Facility for Refugees in Turkey, known as FRiT, which was finalised on 18 March 2016.

Juncker and Tusk bowed down. The ‘agreement’ approved two tranches of funding at three billion Euro each, as financial aid to Syrians. The first was to be spent by the end of March 2018, when a second three billion Euro would be available for a further two years.

Pleased with the situation in Turkey, the EU announced this month that it is ready to release the further three billion Euro of its taxpayers' money, the majority of which was due to come from EU member states' individual budgets.

But not everyone in the 28 member-bloc is happy with the agreement, according to leaked documents obtained by The Black Sea and shared with the European Investigative Collaborations (EIC) network.

These meeting minutes show that national delegates expressed discontent about paying further for the facility from their own pockets. They suggested that funds should be sourced from the pre-accession money used for EU candidate countries or the EU’s main budget.

The documents highlight the hasty way in which the EU approved the second tranche, suggesting it was undertaken to appease Turkey prior to the EU leaders’ meeting with Erdoğan in Varna on 26 March 2018. The move caused “deep dissatisfaction” from all the member states.

The biggest contributor was Germany, which paid in almost half a billion Euro. Next was the United Kingdom, and then France and Italy. By December 2016, all member states had sent their portion.

The leaked minutes of the Steering Committee for the refugee deal show the issue of the ‘second tranche’ was raised at a meeting on 28 June 2017. These meetings are designed to “ensure coordination and efficient use of the [FRiT] assistance.”

In one meeting, the German representative, whose identity is hidden, like all the members, cautioned against a premature decision on the second tranche of three billion Euro. FRiT should instead focus on properly implementing the projects already allocated for the first years, which were barely off the ground. Other member states agreed with Germany.

Steering Committee meetings are held every few months, and chaired by the European Commission. Each EU member state has a seat, and others attend in an observer capacity.

Turkey attends these meetings to provide explanations and updates. But during the sessions where the committee members discuss “conditionality” of the money as well as the direction of FRiT and implementation problems in the country, Turkey is not in the room.

Predictably, Turkey, which now shelters 3.5 million refugees - an increase of one million since the start of the agreement, often uses its delegates to push for the faster disbursement of funds and prompt decisions on future financing.

The member states are reluctant not only to speed up these payments, but to pay at all.

Despite Turkey’s sometimes controversial actions in reducing the numbers of refugees entering Europe, several months after the June 2017 meeting in Brussels, rumours began to circulate in the European media that several EU member states were attempting to push the burden for FRiT onto the EU’s main budget.

No officials would admit publicly on any involvement in a confidential paper sent to the European Commission which outlined a plan to fund the second three billion Euro facility solely from the EU budget.

The leaked minutes confirm that this paper - a “joint declaration” - was signed by six member states: Germany, France, Austria, Sweden, Denmark and Finland. They asked the Commission to “check how a hypothetical second tranche could be financed by the EU budget in its entirety”.

The Netherlands also “associated” itself with plan. The big European players did not want to share the financial burden. The Austrians said there was “no need to rush.”

The minutes also highlight a worrying lack of transparency regarding how the EU funds the existing three billion Euro facility.

During the meeting on 8 November 2017, over a year and a half after the agreement came into force, Germany asked the commission to clarify how the EU's own one billion Euro contribution had been financed and from which part of the EU budget it came.

Would it come from unspent cash within “Heading 4” - referring to an EU budget priority for an “establishing a coherent role for Europe on the global stage”; the flexibility instrument” or perhaps “cuts in other programmes”?

The commission representative, Maciej Popowski, did not answer the question during the meeting.

All about keeping Erdoğan happy in Bulgaria

Despite grumblings from major EU countries, in the last committee meeting on 9 March, the commission stated that it “would adopt a decision on the financing of the second tranche in five days, on 13 March.”

This was in time for a high-level meeting in Varna, Bulgaria, which took place last Monday, 26 March. The summit was expected to provide a platform for the EU’s leaders and Turkey’s Erdoğan to improve their relations after years of insults, and work together on a number of complicated issues - including refugees.

The EU delegates, it seems, were expecting Erdoğan to show displeasure at the delays in financing FRiT, and the meeting notes suggest that the EU rushed confirm the second tranche to save Erdoğan from leaving the Bulgarian sea resort empty-handed.

The hasty announcement was met with exasperation. All member states’ representatives “expressed deep dissatisfaction at the process” and the fact that the decisions on the money were being discussed at a higher, political level, rather than in working groups.

Member states also complained that they had yet to receive a report on how the first three billion Euro was spent, something that should have been required before they could approve the second tranche.

Turkey and the EU: A fragile alliance

Where could the EU find the money? The Commission pushed for a “no-change scenario”. It explained that using up the EU budget was unfeasible, since it was “already under pressure”. As an alternative, some member states enquired whether money could be repurposed from the ‘Instrument for Pre-Accession’ (IPA) budget - the mechanism that supports Turkey and other countries’ bids to join the European Union. In Turkey, IPA money is designed to bring its public policies and institutions in line with EU standards.

The Commission did not find this solution realistic.

Even after the announcement on the second tranche; Germany, France and Belgium insisted that the current financial model should not be maintained. Despite resistance behind closed doors and a problematic legal standing, the EU publicly recognises that FRiT is all that keeps in place a political alliance with Turkey on the refugee issue.

Removing FRiT not only risks a fresh flow of refugees trying to enter the EU, but also growing anti-immigration sentiment in the 28 member bloc.

During the press conference at the Varna Summit on Monday, Donald Tusk said that the EU and Turkey remain “very close partners” in their support for refugees. Referring to the new release of funds, he commented that, “This evening we reaffirmed the European Union's unwavering commitment to continue this support.”

Erdoğan, too, seemed pleased. “We are hoping to leave the difficult times behind,” he said. “This interest from the EU will reassure Syrians in our country and will hasten our work.” Privately, several member states are discussing exit strategies from the arrangement, raising questions about how long the EU can maintain its uneasy alliance with Turkey, where they are dealing with the human consequence of the still-raging war with Syria, while keeping its victims out of Europe.

The minutes, however, show that Turkey is already planning for a third tranche of money. The amount is not yet determined.