A wedding in the sky

Shot in the Revolution, pimped out by her mother, lost to drugs and now homeless, Sanda is one of countless victims abandoned on the 25th anniversary of Romania's uprising 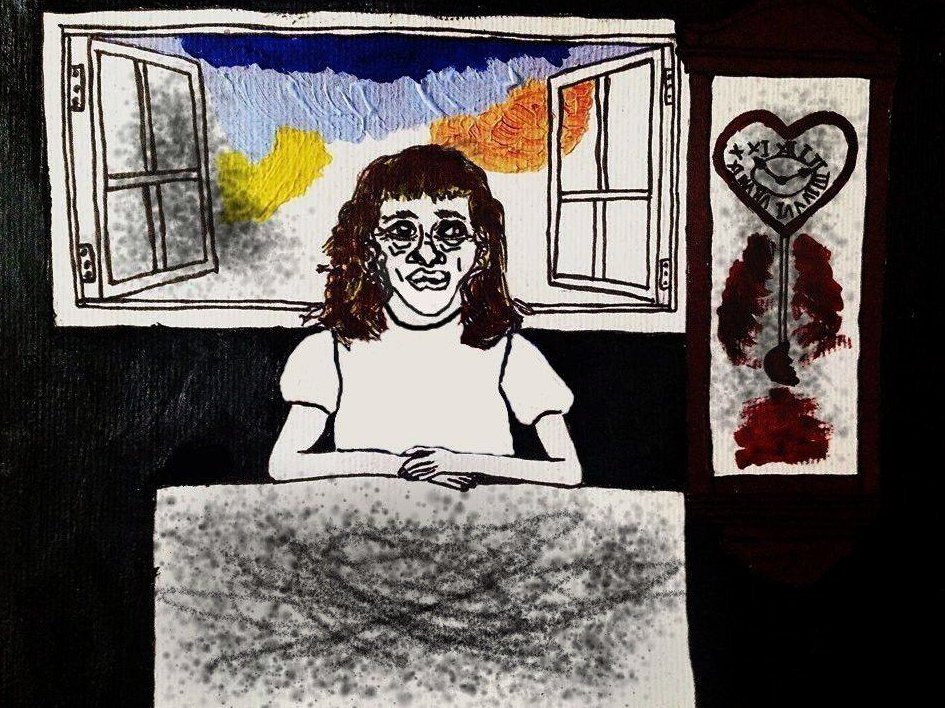 I am sitting in the attic office of the French-Italian charity Parada, which trains homeless people from Bucharest in circus skills.

Alongside me is the forty-something director Ionut and his younger colleague, social worker Adina.

The door opens slightly. A loud and insistent voice starts.

“I need to talk to you, mister manager,” a woman says.

“You’ll have to wait a few moments,” says Ionut.

“You are Vlad the Impaler!” she says.

“We will speak afterwards.”

“We need to make me an ID,” she says, talking about a temporary identification for the homeless.

“Here,” says Ionut, passing her a red-and-white ribbon attached to a silver brooch. “Have this, then we can get you an ID.”

She takes the keepsake and leaves, but stays in the corridor outside the office.

This is Sanda, I later find out, a 39 year-old former prostitute and heroin addict who, as a child living on the streets in Bucharest, was shot during the 1989 Romanian Revolution.

She peeps from around the door.

I tell Ionut I would like to speak to her about her experiences.

“You can talk to her,” says Ionut, “but she does not have a logical discourse.”

“I am hungry, mister manager,” says Sanda. “I want some soup.”

“A man here would like to speak to you,” he says.

She enters the room, bows her head, looks up at me with a mix of humility and contempt and then sits down, her back arched, her hands closed in front, wearing a white baggy t-shirt and jeans.

I ask her a basic question about her life - too vague perhaps - but she begins to speak in a monologue which mixes an attempt to answer my question with thoughts from her unconscious, pushing for verbal expression.

This is how she communicates. It is not coherent, but needs recording.

“I want to say that when I arrived on the street, I was a virgin. When I slept with someone, “The Surgeon”, at Bucharest’s North Station, where he was baking pastries, I got filled with lice, but during the time I spent at the orphanage, my family said I wasn’t a virgin.

"Oh yes I was. I had sexual intercourse when I came to the boulevard. I looked upon a boy, I fell for him and that boy took my virginity. I held on to myself and I told everybody I was a virgin. I left there on September 13th and I filled the bathtub with blood.”

“In the Revolution, I want to say that it wasn’t my dream”

On 21 December 1989 the revolution moved from the eastern city of Timisoara to the centre of Bucharest, where the Communist regime’s armed forces began to fire at the demonstrators.

On the streets of Romania’s capital were many children living rough or a semi-vagrant existence.

When they heard the guns, soldiers and military vehicles, the children followed the rebels on the ground. It gave them a thrill, but they had no protection from the danger.

That night was one of bloodshed on the streets - and on the morning of 22 December Sanda was shot in chest.

She was taken to a hospital to be treated. Doctors removed the bullets and stitched up her wound. A document still exists detailing her internment.

But she does not have a state pension granting her benefits as a victim of the revolution.

I want to ask her to be more specific about what happened during those events.

“Were you in the Revolution?” I ask.

She lifts up her shirt and shows me a scar, about thirty centimeters long, curving around her left breast.

“Actually, I don’t know what happened. Vasilica, my mother, because she was in the register, brought there, I don’t know where she got it, a piglet and, for a day or two.”

She pauses, for a long time, thinking, looking at me.

“No, Joseph and Mary, when I was sleeping in the shed, at no. 129, there were two beds, one like this and one like this.”

Ionut, the manager, tries to push her to open up about the events.

“In the Revolution, I want to say that it wasn’t my dream, Vasilica had to die, not me.”

“Do you remember when you got shot?”

“Yes. So, I turned back, I came and there was… a kid and some policemen stole, they were the ones who stole.

“You know, talking about the Revolution, some people were very…I fought with…I fought for…They started to throw tear gas…I had a transparent scarf and I covered my eyes with it. I entered a car and I threw, me by myself…I didn’t have anything to win or lose. I only threw at the cops. Do you understand?”

After 1990, Sanda was pimped out by her mother on the streets near Bucharest's main railway station.

During this time she experimented with drugs, including sniffing the paint-thinner aurolac. Its long-term use causes memory loss and delusions.

“I was a virgin back then. I want to honestly say that I don’t know who gave birth to me. I saw the photo…They told me…A family…I know that a family member doesn’t send you to be a prostitute. That this is the rule. If they were my family, they wouldn’t have sent me to sleep with people, because they had something on their hand, their children were devils…I wasn’t afraid, I slept there, I played with the kids.”

“How’s your relationship with your mother now?” Ionut asks.

“I don’t even know, mister manager.”

“After you left prison you stayed with her for a while.”

“I don’t even know if she is really my mother.”

“Until what age did you stay at home?”

She speaks loudly and starts to whine.

“Everybody is,” says Ionut.

“I liked it in the orphanage,” she says, “when I got to jail, I said I was at the orphanage. For robberies, I used to steal together with Vasile, I used to take… that’s what I call them, family. I used to pull the bars and tear… Vasile didn’t have as much strength as I did.” She laughs. “Nine times in jail.”

In the weekends, Sanda enters into a depressive state. She hangs around the city's central square of Piata Unirii and the train station, where she used to walk the streets.

Sometimes she ends up in the psychiatric hospital in the south of Bucharest.

“During the Revolution, there was…grandpa also had come, I stole some shoes from him, I stole his shaving gear, I stole his money, we were walking at Unirea, I was holding his hand, I wasn’t ashamed…I stole his…because he used to kiss me down there and he told me to take it with a condom and I didn’t want to, I didn’t feel like it, I don’t know how to say it.”

“I wasn’t tempted to put my soul into money”

“When did you start taking drugs?” I ask.

“I was at the hotel, on the boulevard… There was a man with a bag of money…I personally want to say, honestly, because I don’t lie in front of the manager, that I really wasn’t tempted, to put my soul into money I mean. No. I put my soul into my family.

"Mioara [her sister] taught me, because otherwise only if I saw in movies I would’ve said that they were drugs, those bags. There was a taxi driver there and there was where I started to smoke.”

“And I enjoyed it, but I didn’t know what could happen from those.”

“After that you injected heroin?”

“When you get high, on legal highs, on heroin, and when you drink, you still have reason, you know that…I want to give you an example: those people who act stuck-up... get out of here. Do you understand? They were going all over the place and they wanted the international population and our people, the Romanians, to gain trust. Look at these poor people, let’s give them something to eat…but back then, they didn’t know who they were dealing with.

"I appreciated, I travelled to Europe with the money I stole, I apologize to that gentleman. I didn’t even sleep with him. There was also a gentleman with glasses, kind of short, skinny, he wasn’t…And honestly, I repent myself very much for…I took a picture and I gave it to a soldier in the train station.

“Those substances made me human. Those substances, those legal highs, I see everything a man has done, what he’s been through, if he’s drunk, if he cheated and even the sins. Do you understand?

"Because I, when I was at the train station, I felt exactly like it’s in the movies, someone playing, he wants to deny, that is to lie for money. But that money, paper, also kills them. Do you understand?”

“I gazed at the sky: I saw a wedding”

“I honestly wasn’t to blame, from there I took to the streets, I had sexual intercourse…I want to say that at Saint George there were a lot of…a wedding.

"In the morning, I gazed at the sky and I saw there a lot of people, up there, a wedding. I was there, at the church, at Saint George’s, but nobody rewarded me with money. They humiliated me.”

She begins to cry.

“What do you want to know?” asks Adina, the social worker.

“You belong to yourself.”

“I don’t know. But I want to say that, I don’t know…if they were my family, they wouldn’t have accepted…That’s what I think, it’s common sense, no matter how poor you are, don’t throw him and don’t humiliate him and don’t take advantage of him. I want to say that, for me, this family…I always wanted a family, not to go out and sleep with people. You also have a reason and you can find different words in the same sentence. Do you understand?”

Sanda’s sister Mioara trained at Parada to become a clown and, with the organization’s help, now she lives in France. Sanda came to the charity after her sister left.

Now she is looking to obtain a temporary ID ‘without space’ for the homeless.

But this is almost impossible to obtain for people without a coherent discourse.

“From where do I know you?”

She is dressed in a jacket and a loose shirt and skirt, munching on a sandwich. But she is only eating the inside, and leaves the crusts, which hang loose out of her grasp.

I am carrying my three-year old son.

“Hello,” she replies, a little confused, but smiles.

He doesn’t say anything.

“I interviewed you a couple of weeks ago.”

I don't think she can remember.

“We spoke about your life,” I say.

“Do you have a cigarette?” she mimes the act of smoking to her mouth, “or some money for a coffee?”

She frowns, waves her arm in the air and dips her head, as though to gesture to me to move on.

She mumbles something in reply. I cannot make her out.

Help with translation and editorial assistance: Ionut Dulamita. Thanks to the staff of Parada