Click on the mosques for more details. Magnify for exact locations.

To discover size, images and sources of financing for every building in Turkey's massive mega-mosque plan, click here

Turkey is spending hundreds of millions of Euro on plans to build over 30 mega-mosque projects across five continents, arguing it is offering Muslims new places to pray.

But many critics believe Turkish President Recep Tayyip Erdogan is constructing palaces to his power using his own people's money in bizarre and irrelevant locations.

Some of these hypermarket-sized mosques are set for urban centres with a Muslim majority, such as Tirana and Istanbul, but others target capitals where Muslims number only a few thousand, such as Bucharest, Havana and Budapest.

Turkey appears to have switched its traditional mission to serve active Muslim populations abroad to constructing vast monuments to what critics call a “State Islam” and President Erdogan himself.

The project’s masterplan is drawn up by President Erdogan and his prime minister, Ahmet Davutoglu, seen as the architect of Turkey’s aggressive foreign policy to project itself as the pre-eminent Muslim nation.

“Ultimately every mosque abroad with a Turkish brand name seems to contribute to the discourse of Turkey as a leading Islamic power,” says Kerem Oktem, Professor of Modern Turkey at the University of Graz (Centre for Southeast European Studies).

This global mosque-building program echoes the massive expansion of religious buildings during the Ottoman era of Sultan Suleiman in the 16th century. In 2014, President Erdogan stated that “we [the Turks] are the grandchildren of Suleiman the Magnificent”.

“The Roman Empire used to build temples on the places they took over to remind people of their conquest,” says Ozgur Kazim Kivanc, spokesman for Istanbul-based association Anti-Capitalist Muslims.

“We believe the instinct is the same. Places of worship are not compulsory for a belief system to spread - especially in Islam. This [plan] is not about worship, it is about marking the territory of their authority through a monument. It is quite difficult to argue that this is something that Islam would accept.”

Turkey is rivalling the mosque diplomacy enacted by Saudi Arabia and the Gulf States in the last two decades, where the oil-rich countries renovated and constructed mosques around the world, as a means to seek political influence.

But these countries mostly follow an ultraconservative Wahhabist doctrine, which grew dynamically since the 1970s, after the tapping of the Arabian peninsula’s oil reserves showered the countries with wealth.

Turkey sees a gap in the market for its “mild” brand of Sunni Islam, which includes women-friendly mosques and an intolerance of extremist rhetoric.

Western leaders view Turkish Islamic expansion as more favourable than the spread of places of prayer from rogue Imams or what they view as the radicalism of Wahhabism.

Turkey’s new places of worship are mixed with cultural centers, places of learning, shops and cafes - indicating that these “mega-mosques” aim to act as showrooms selling the concept of Turkish Sunni Islam.

But while critics accuse Erdogan of neo-Ottomanism, Turkey seems conscious of the mixed reaction from nation states to its imperial past when soliciting locations for mega-mosques.

The Black Sea's research shows that no giant mosques are planned for European countries who have a major historic beef with the Ottomans, such as Armenia, Greece or Austria - nor in the larger Arab nations that were part of its former Empire.

Turkey is also planning mega-mosques in nearly all major European countries - except the Catholic ones.

None are yet planned for Italy, Poland, Croatia, Slovakia, Austria, France, Belgium, Portugal or Spain.

All the countries in Europe marked by a mosque on this map are either Orthodox or Protestant in their key religion. Only in Hungary - 37 per cent Catholic - is a mosque planned, but Budapest has yet to agree a location for its mega-mosque.

Tensions between the Catholics and the Ottomans stretch back six centuries, and culminated in a Papal War against the Ottomans which ended outside Vienna in 1683.

The only Catholic countries where Turkey is planning mosques - Haiti, Cuba and Philippines - are those furthest from Rome. 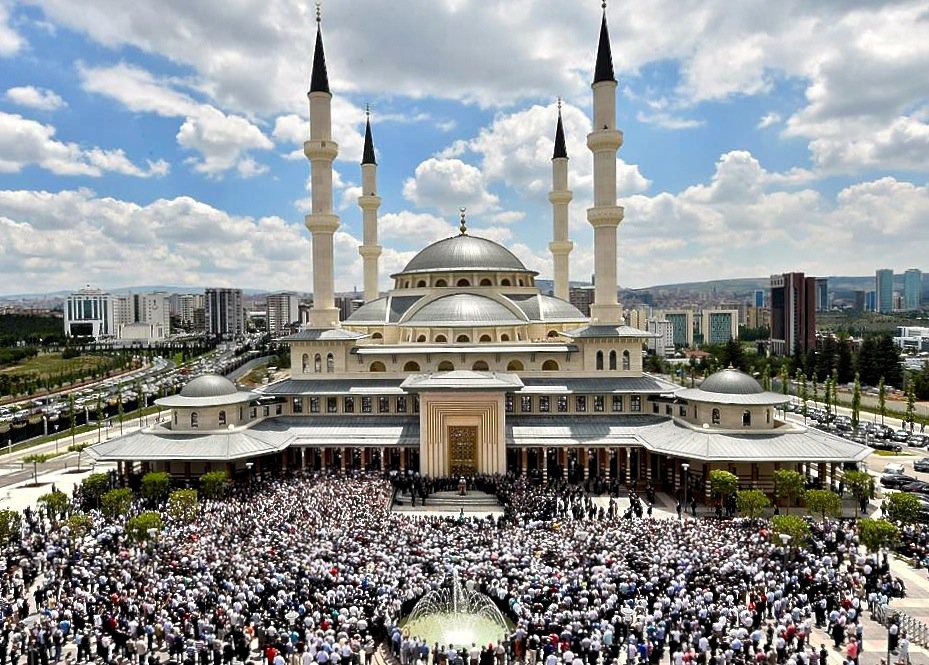 Until three years ago, Turkey’s mosque-building and restoration project was driven more by demands from local Muslims who needed a place to pray.

Now Turkey is exploring new territories to open giant mosques - including some with large Muslim populations underserved by their current religious centres - such as Mali, the Philippines and Somalia - and other countries opening up to foreign investment, such as Cuba.

Turkey is also focusing on opening mosques in its backyard of the Balkans and east Europe - with mosques planned for Georgia, Hungary, Romania, Albania, Kosovo, Ukraine, Belarus, Russia and in its own territory.

Many of the new mosques are built without public consultation and are the result of Government-to-Government deals, while in Turkey the mosques are often built on protected land.

“In Turkey these projects are decided behind closed doors in an undemocratic way, without any consultation from architecture organizations, universities or NGOs,” says Oguz Oztuzcu, architect and former president of Istanbul Independent Architects’ Association.

“This creates tension. If this is the situation in Turkey, then it will definitely create more problems abroad.”

The newest projects have nothing to do with what Kerem Oktem calls a “rather sensible and ‘organic’ approach,” of working with local Muslim communities to build or restore mosques.

Instead, he argues, President Erdogan is building “palaces to his own power”.

Wherever possible Erdogan will open the mosques personally, and has even named a mosque in Somalia after his mother.

The clearest indication of this is the new Istanbul mosque at Camlica, a 60 million Euro mega-mosque with six minarets visible from the entire city, which will transform the skyline. Erdogan's political party of Justice and Development (AKP) does not hide that the Camlica mosque is a representation of its own legacy.

“The aim of building this mosque in Camlica is to leave a symbol signifying the AKP party era,” Minister of Environment and Urbanization, Erdogan Bayraktar, said in 2013.

Erdogan’s ramping up of the mosque-building programme in the last two years may come from a fear of losing control over his country.

“Erdogan’s ‘grand mosque programme’ is, above all, a function of his own delusions of grandeur, of his waning power and his growing impotence,” says Oktem.

The AKP-led Government in Turkey in June lost its majority in the Turkish parliament, while the brutal crack-down on the protests in Istanbul’s Gezi Square in 2013 brought international condemnation on Erdogan’s government.

Senior figures close to Erdogan are facing rigorous corruption allegations. On 1 November Erdogan's party faces another election. The President is desperate to win a majority so that he can change the constitution to make him the head of Government and grant his office vast unchecked powers.

This year alone Erdogan has opened a record number of giant mosques - in Kazakhstan, the USA, the Netherlands, Russia and Somalia, and three in Turkey.

“In this context, I would assume that part of these mosque building projects are intended to deflect attention from the fall from power of the AKP,” says Oktem. “I am not sure this programme has much to do with devotion to religion or ideology. It looks like a rather desperate attempt to be seen doing something other than corruption.”

"This strategy is aimed at the Turkish electorate,” he says. “It is about [the AKP] getting more support from people and strengthening their authority by saying ‘look at us, we are so powerful that we build these extravagant mosques for our religion.’"

Asking Turks to pay up

This expansion comes with a cost in the hundreds of millions of Euro. Turkey is undertaking this programme mainly through the office of Religious Affairs, Diyanet, a multi-billion Euro government-sponsored organisation which funds religious teaching at home and abroad.

The Turkish Republic in 1924 founded Diyanet to oversee affairs related to faith and worship of the religion of Islam, such as paying the salaries of Turkish and foreign imams. The aim was to separate religion from politics.

But since Erdogan’s AKP came to power in 2002, Diyanet has transformed into a propaganda vehicle serving and exporting Turkey’s religious society.

Sevgi Ozcelik, project coordinator of Human rights NGO the Helsinki Citizens Assembly stated in December 2014 that, due to its budget hike: “Diyanet should be now considered as a strong political player, not an institution providing religious service.”

In 2014, this department became answerable to Prime Minister Davutoglu, in a move which some viewed as revealing Turkey had ended its 80-year history of separating religion from state politics.

Diyanet acts as the superior religious authority in Turkey, with its diktats and preaching.

But while Turkey frames itself as the “liberal” Islamic power of the Middle East, Diyanet seems to indicate otherwise.

Diyanet preaches against contraception, calls abortion “murder” and states couples should not hold hands outside before they get married.

In addition, it has stated that tattoos are sinful and discourages men from wearing earrings or any jewellery.

Diyanet claims illegal downloading on the internet is against Islam.

The office also declares having a pet pooch is against Islam, because Muhammad said angels will never enter a house where there is a dog.

The office has implicitly supported the AKP’s more controversial policies of the last few years, such as its bans on YouTube and Twitter and the police’s use of pepper spray at protests.

Leading the way in building new mosques is Diyanet’s own charity arm, the Diyanet Foundation. During prayers, Diyanet Imams collect money from mosque-goers, who feel obliged to give small amounts regularly.

In pious neighbourhoods, the donations are higher - but with 86,000 mosques throughout Turkey and millions of worshippers, the sums collected can be significant.

It is not clear how much of the financing for the Diyanet Foundation - which needs 100s of millions of Euro to build these foreign mosques - is from the collection plate, corporate donors or wealthy individuals. Or indeed Diyanet itself.

The foundation’s donations in 2014 were 120 million Euro, compared to 50 million Euro in 2010. This figure has increased by almost two and a half times in four years, at a time when the country’s growth rate tumbled from 12 per cent to two per cent.

Diyanet claims that none of its billion Euro publically funded budget is diverted to the Foundation's mosque projects abroad.

But The Black Sea has uncovered a document showing that Diyanet has actually provided the Foundation with grants for the construction of mosques in the USA, Germany, Kazakhstan, Kyrgyzstan and Turkish Republic of Northern Cyprus.

The document, a copy of a written answer to a parliamentary question raised in 2014, confirms that taxpayer money was spent on the mega-mosque projects abroad, but it does not disclose how much Diyanet transferred to its Foundation.

“There are such lands where there are thousands of Muslims and yet there is not a single mosque,” he stated. “So [donors] are presenting alms to the Muslims of the world as a nation and these are returning to [them] in the form of blessings from the Almighty.”

But Anti-Capitalists Muslims Association’s Ozgur Kazim Kivanc warns that Diyanet is creating a “state Islam” based on the Sunni Islam of the Turkish majority.

“Diyanet’s increase in its financial power fits the ideology of the new national authority," he adds, "that of creating a Sunni national identity."