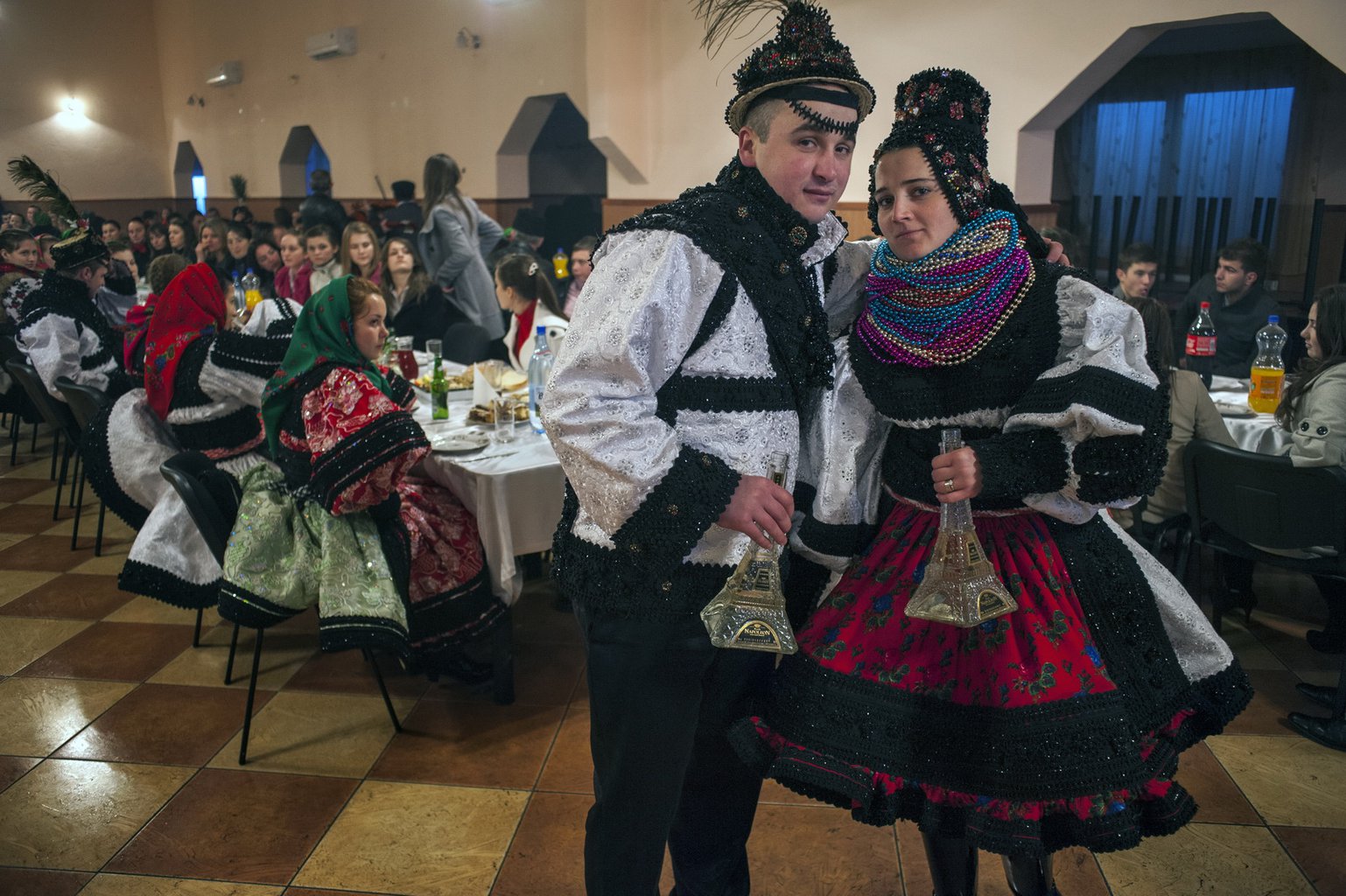 Towers of strength: Recently married couple in Tarsolt posing with Eiffel Tower bottles full of locally made plum brandy Palinca: a symbol of success for the villagers (Photo © Petrut Calinescu)

Throughout most of the year the northern Romanian villages in the Tara Oasului district are deserted.

There is no sound of cattle coming home, hens clucking in the yard or the clatter of horse hooves.

But in the month of August, the village alleys are gridlocked by top-of-the-range convertibles, sports models and SUVs.

This is when hundreds of the village residents return home from working in jobs such as builders and cleaners in Paris, where they live on the outskirts of the city in cramped apartments, so they can save money to send home.

During this time, in some villages in Oas, a car can be stuck in traffic for an hour between one end of the village and the other. 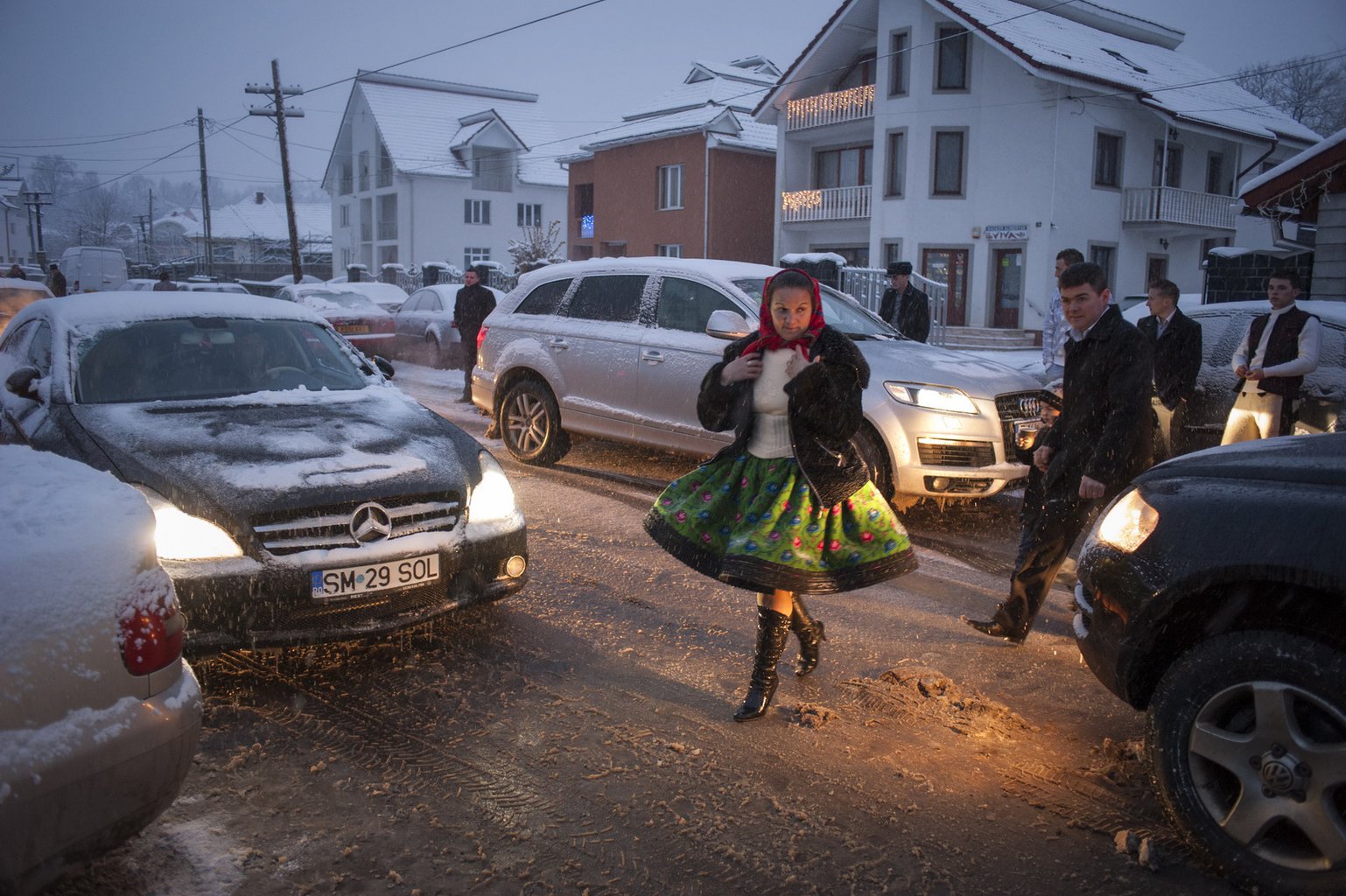 In all weathers: Villagers head to community centre in Tarsolt for a wedding (Photo © Petrut Calinescu)

This is most severe after the Assumption of the Virgin Mary on 15 August, when the wedding season begins.

Weddings always take place at home in Romania, never in France. No matter how cosmopolitan the villagers’ lives may be, no matter how many nationalities they come into contact with in Paris, marriages take place between people of the same village.

And the parents of the bride and groom have the last word.

An average villager can attend up to 20 weddings in one summer.

Weddings in Oas work as a social mutual aid fund, because guests at weddings must give money to the bride and groom. Those who have small children attend weddings to ensure a certain number of guests will turn up to their own children’s weddings, which could be decades ahead. This is a way for them to invest in their children’s future. 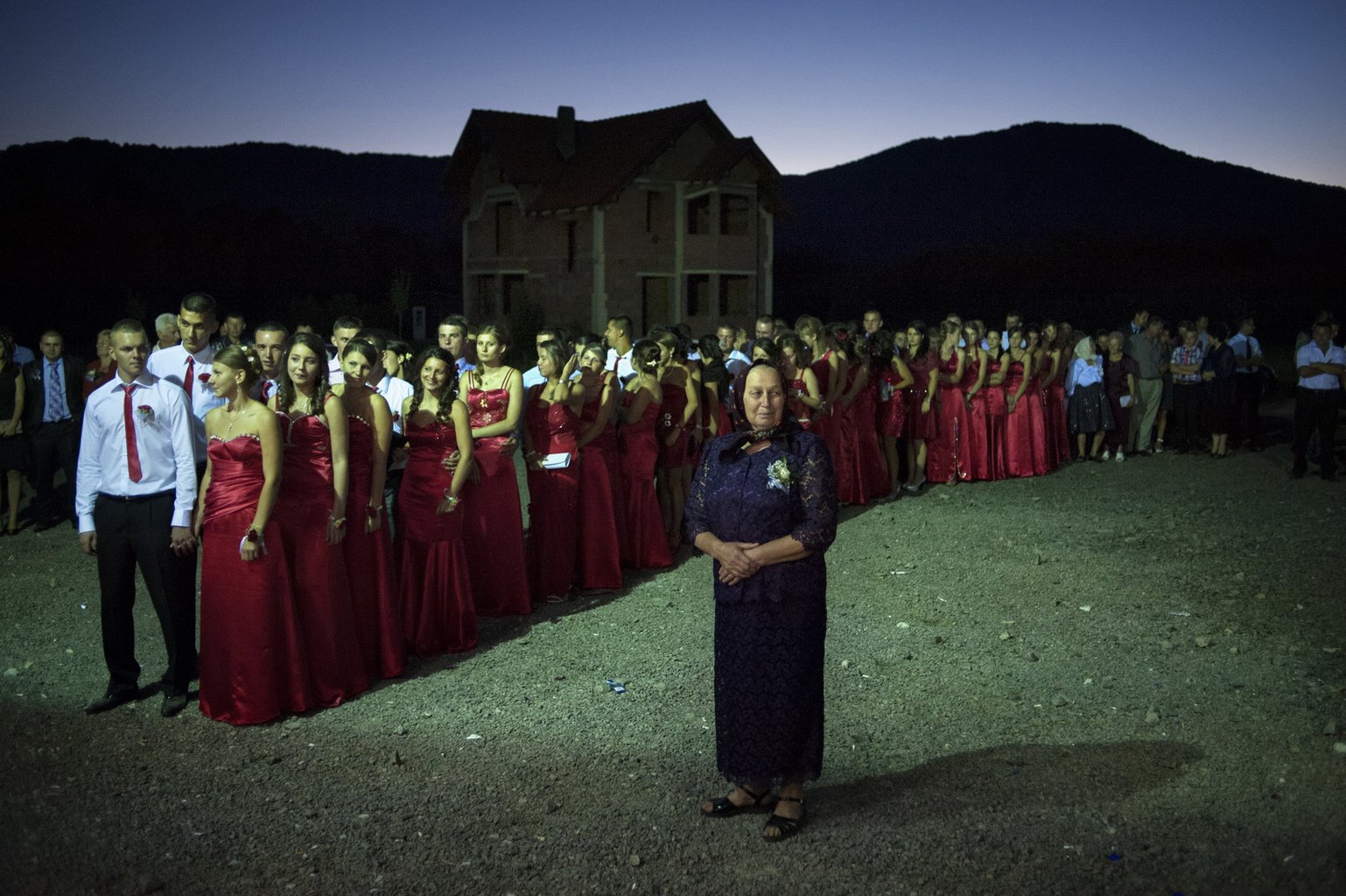 For the event, the organizers hire a specialized catering firm, which means all the weddings have the same menu - a list identical to that of the Christmas celebration, one of the other few moments when residents come back home.

Although the villagers are intent on installing state-of-the art kitchens in their houses, most do not cook, but order take-outs.

Before a wedding day, the women traditionally used to strip and tenderize cabbage leaves, rolling a mix of mincemeat, rice and herbs inside each leaf to create cabbage rolls sarmale for the guests. 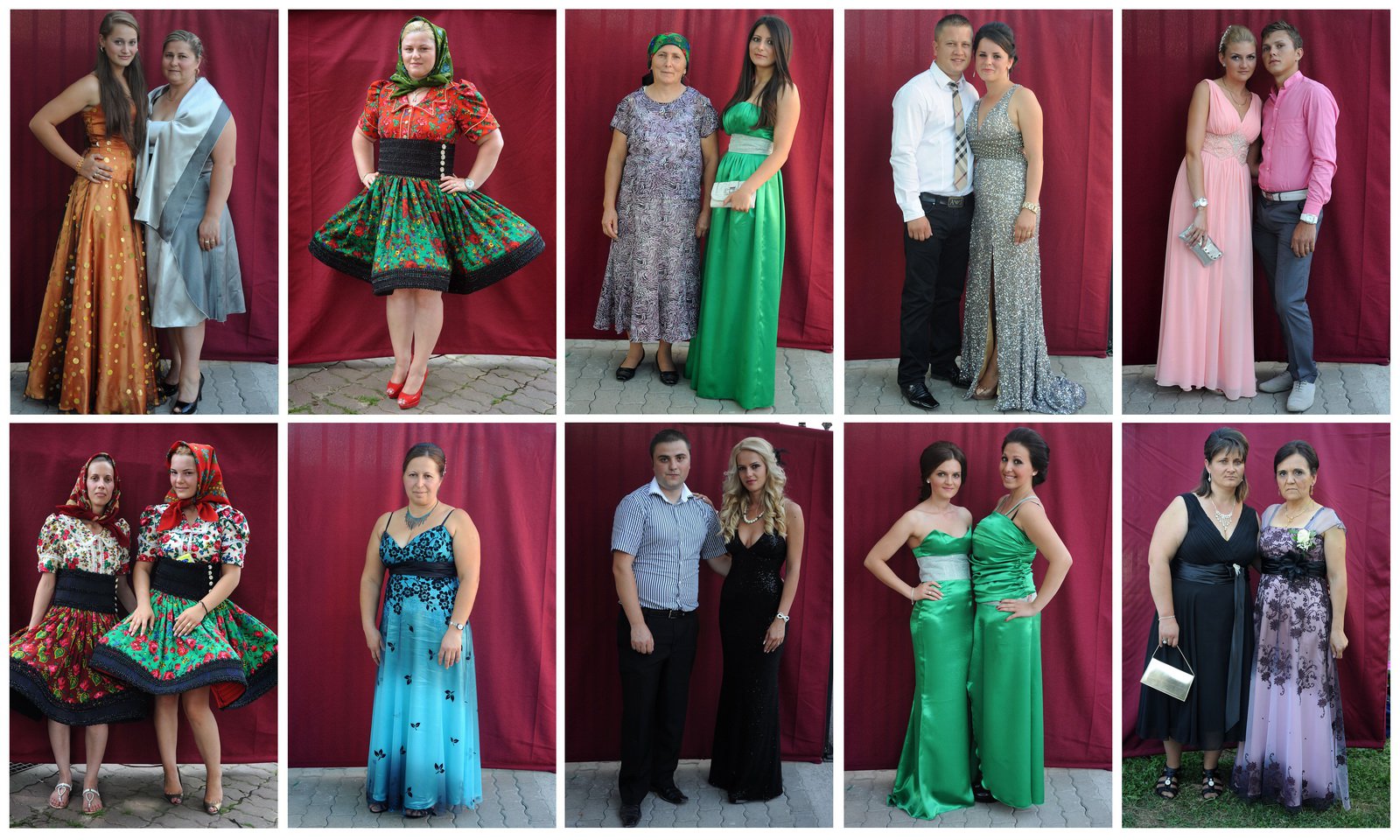 But now these women go to beauty salons.

In August, one cannot get an appointment in a salon - this is despite the fact that there are over 25 in the town of Negresti Oas.

Customers make the appointments from abroad many months in advance.

One day in summer a few years ago, a hairstylist in Negresti Oas fainted from exhaustion and was rushed to hospital.

The women who had appointments waited for her in the salon, to come back from the doctor and finish arranging their hair.

None of them gave up.

But this year the villagers are complaining about the number of weddings they must attend - which is reaching 40. 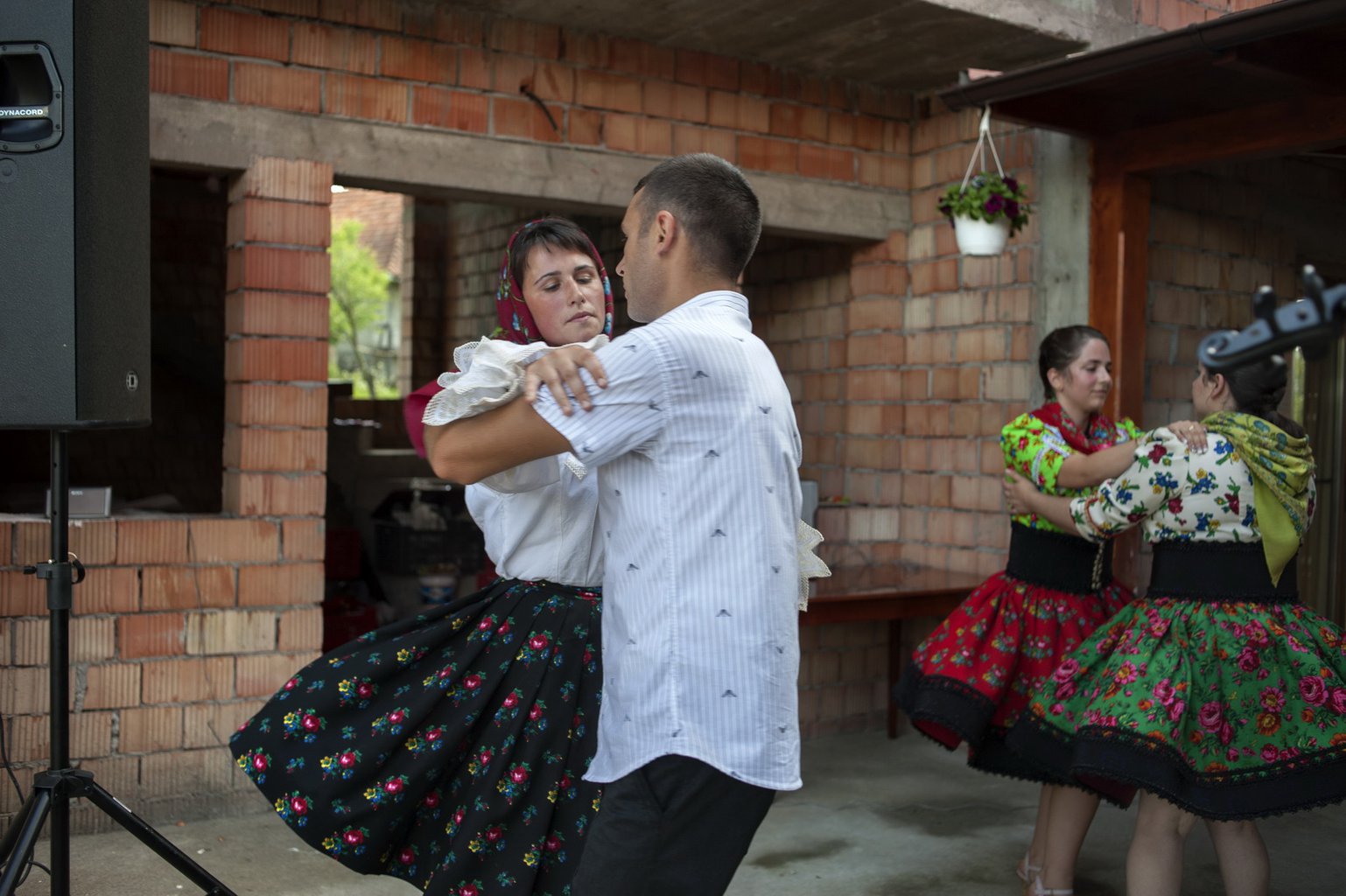 Waltzing in the building site: the wedding in Tarsolt of a young couple working in the UK (Photo © Petrut Calinescu)

The adorning of the bride starts two days ahead and the longest procedure is the hair weaving, a technique known only to a few women in the village.

The weaving uses industrial margarine to grease the hair to make it easier to plait - a process which takes eight hours over two days.

Maria Veletean from Certeze is one of the few women who still know how to weave the bride’s hair. She earns around 9,000 Euro in the month of August just for the weaving. For the rest of the year, she works as a housekeeper in Paris.

The night before the wedding the bride sleeps in a fixed position, with a section of the wedding crown already stuck in her hair.

A traditional bridal gown weighs over 20 kilos and costs between 2,500 and 8,000 Euro, depending on the number of beads that garnish it. Recently Swarovski crystals have started to appear on Oas bridal gowns.

The boots are custom-made in the villages and are so rigid that every bride suffers of sore ankles. The brides stay dressed in this clothing for roughly ten hours.

Under the scorching August sun, the bride often turns white and has to sit somewhere in the shade so as not to pass out.

She is left with a severe pain in her ribs.

In some villages, after the first wedding, the bride is left to rest for a few days, so that the wounds and bruises from the shoes and the traditional bride costume she wears can heal, before she is ready for the second ceremony. 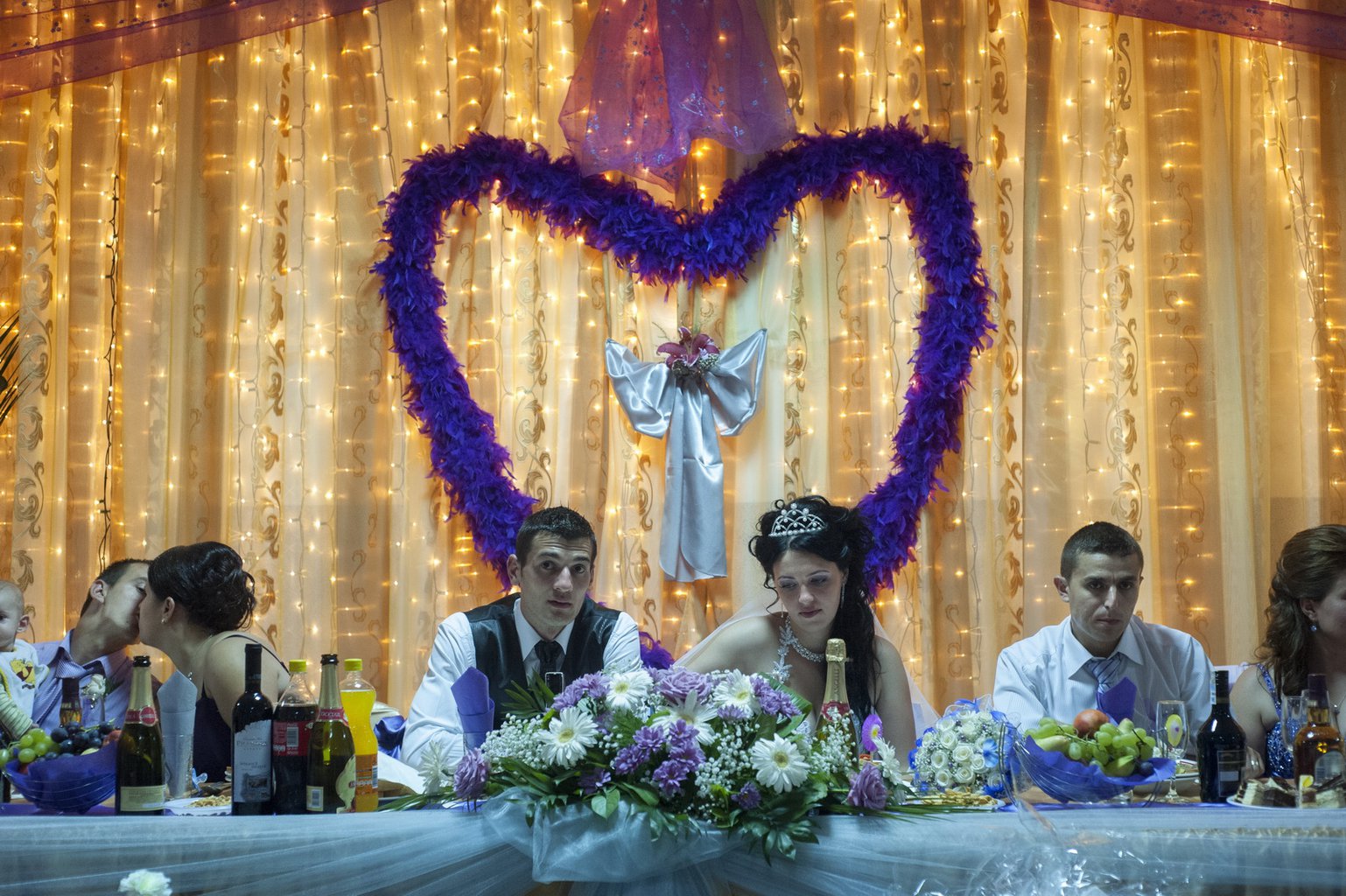 The wedding of Ionut and Maria Certeze, Oas county. Both work in Paris (Photo © Petrut Calinescu)

Once a horse-drawn carriage filled to the brim with wedding guests and musicians would gallop through the village several times, the sound of violins and joyful voices filling the air.

There are young people today who still remember the bellharper - the violin player - seated in the middle of the cart and the wedding guests, together with the bride and groom, standing in the cart and singing, while the horses ran in front. 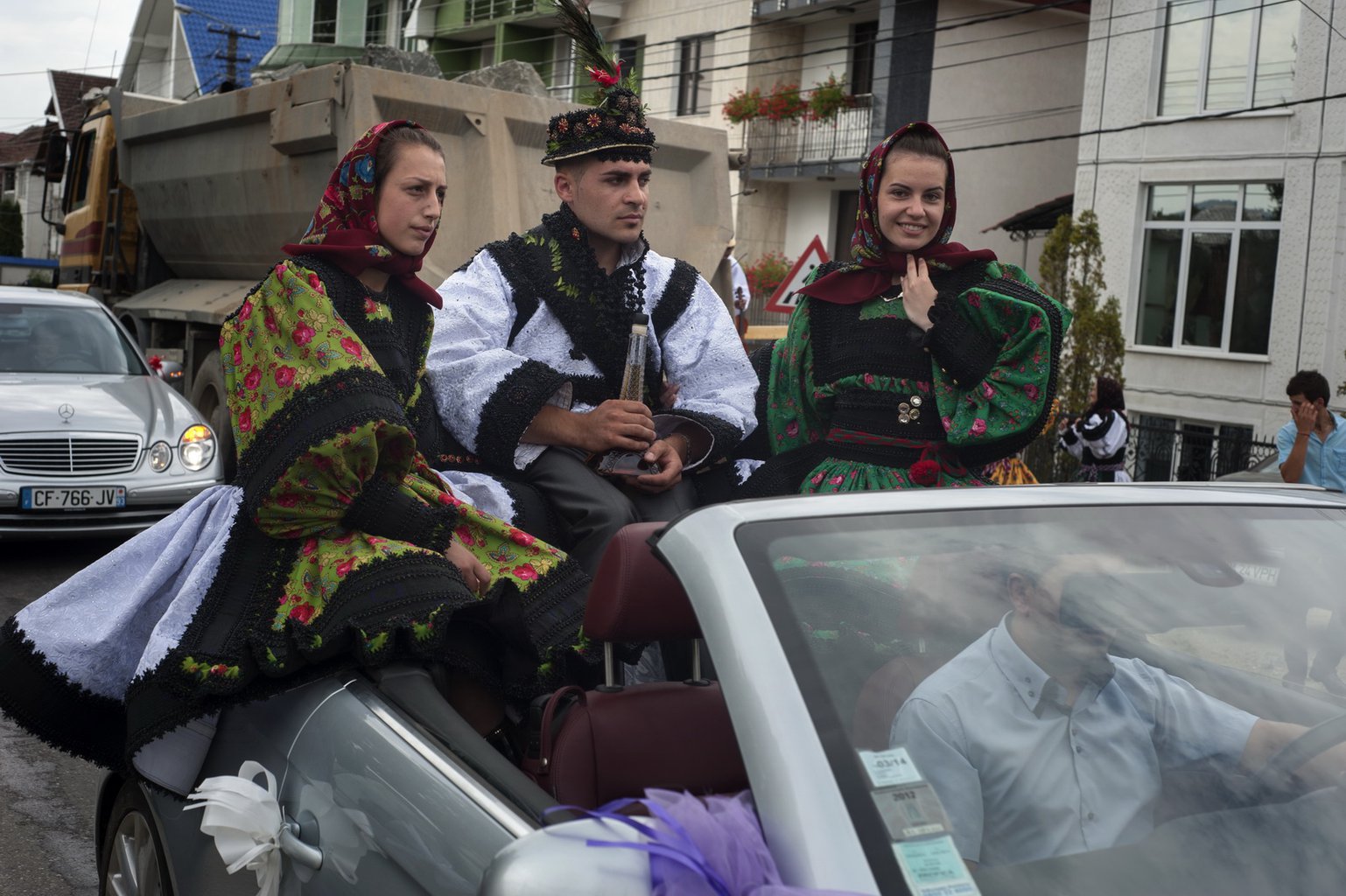 But now the bride turns up to the wedding in a convertible.

Such a transformation took place almost instantly. There was no period of adjustment.

How long does a wagon to turn into a convertible?

Only a few years of hard graft in Paris, Vienna or Milan.