"I'm being detained. They're taking me to the prosecutor due to a tweet" Ahmet Şık 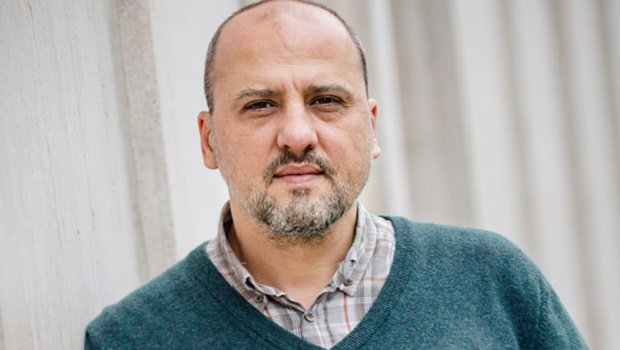 In prison for Tweeting: Ahmet Şık

Turkish police detained investigative journalist Ahmet Şık at his home in Istanbul today, accusing him of creating "propaganda for a terrorist organisation" and insulting the Turkish Republic, its judiciary, military and security forces.

46 year-old Ahmet announced on Twitter at 5:56 this morning that: "I'm being detained. They're taking me to the prosecutor due to a tweet."

The charges stem from his activity on Twitter criticising the Turkish government's arrest of Kurdish MPs.

Also added to the mix is a 2015 interview with the head of the Kurdish Workers' Party (the PKK), considered a terrorist organisation by NATO and the EU, and two other reports in Turkish daily Cumhuriyet.

The motivation for the arrest also include remarks made by Şık during a European Parliament workshop on press freedom. 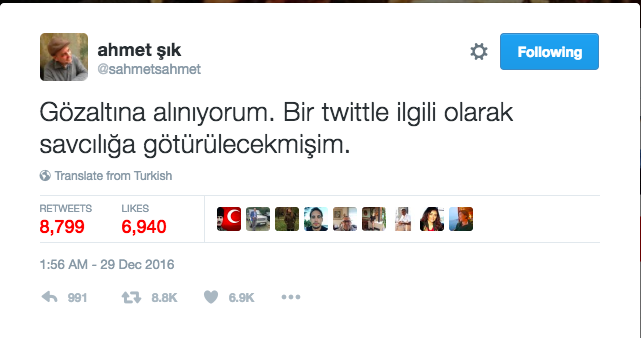 Ahmet has been held under the Turkish Government's state of emergency powers, which were adopted following the failed coup against President Recep Tayyip Erdogan in July this year.

This decree has been used to jail dozens of journalists, academics and lawyers, and to shut down human rights' organisations.

The use of emergency powers means Ahmet will be denied access to any legal services for the next five days.

His lawyer, Can Atalay, told the Turkish news website Bianet that "the police are not allowing us to see Ahmet with the excuse that the process is ongoing."

Atalay later confirmed to the BBC that he is banned from speaking to Ahmet.

The Turkish Anadolu Agency, a state news organisation and mouthpiece of Turkey's ruling party, the AKP, reported that Ahmet was detained over three tweets he made between late November and early December 2016.

Onder is an MP for the People's Democratic Party (HDP), a pro-Kurdish political party with seats in the Turkish partliament, was detained in November for terrorism-related charges because of a photograph taken of him with a member of the PKK's media team.

The HDP, however, were part of the team negotiating a peace deal between the Government and PKK, which also including members of AKP - hence the questioning tone of Şık's tweet.

Tweet 2: "The war with the PKK, even though there have been pauses, has been going on since 1984. Instead of comparing people burned to death in Cizre and people blown up in Istanbul, why don’t you get angry about both of them?

In February this year, 60 people burned to death in an apartment basement in Cizre, southeast Turkey, as they took shelter during Turkish army bombing campaign against the PKK. 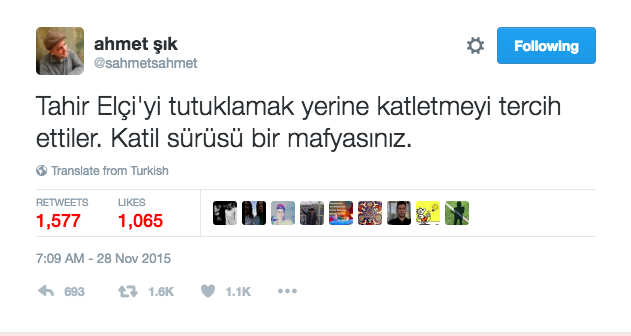 Elci was head of the Diyarbakır Bar Association, and a human rights lawyer who defended the rights of Kurds in Turkey.

A fierce critic of Gulen and Erdogan

Ahmet was previously jailed for 375 days in 2011, along with fellow journalist Nedim Sener.

Ahmet's unpublished book, The Imam's Army, about the infiltration of Turkey's institutions by followers of Fetulah Gulen - blamed for the recent coup - caused his prior arrest.

Two years later, Turkey's supreme court quashed the Ergenekon convictions, stating that the prosecutor - who fled Turkey last year - failed to establish that the 'terrorist organisation' had ever existed.