"Turkey is the Republic of Cement": jailed journalist Ahmet Sik on trial

Turkish investigative journalist Ahmet Sik has been in prison for two months, accused on terrorism charges for tweeting criticisms of the Erdogan-led Government. Today he made a rare venture back into the public eye - speaking as a defendant in a different trial 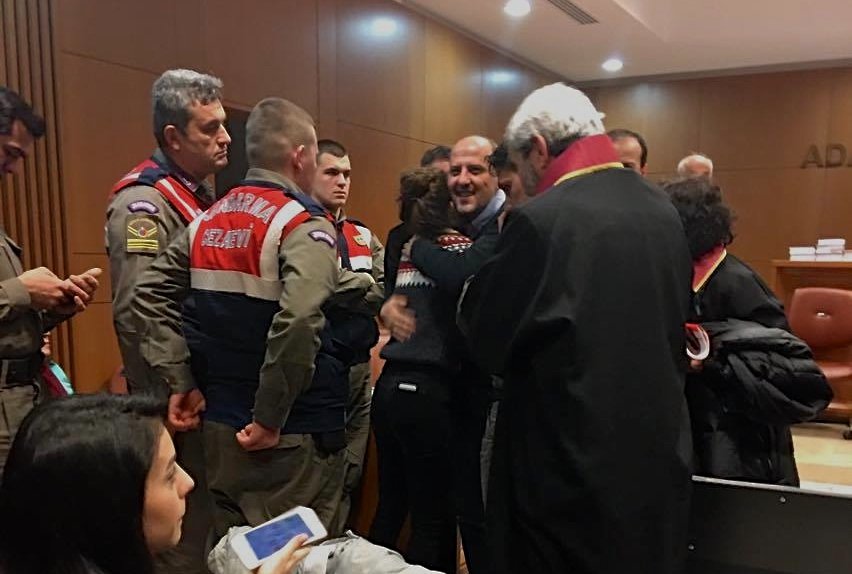 Turkish investigative journalist Ahmet Sik was brought in front of a judge today to defend himself in the OdaTv trial. This is part of an investigation which started in 2011 when he was first detained for a year, accused with membership of a clandestine terrorist organisation, which was later found out to be fictional.

He is currently in jail waiting for the indictment in another case.

On 14 December 2016, the prosecutor wanted Ahmet Sik and other 13 defendants to be acquitted on the grounds of lack of evidence.

Sik refused and asked for extra time to defend himself in front of the court for the last time. The judge had postponed the hearing to 15 February 2017.

This is what Sik said in court today:

“Turkey is a strange country and has experienced many absurdities before now. But there has never been an era where universal democratic norms are thrown out and re-defined to serve the benefit of an organised evil which currently encompasses the country.

"George Orwell’s '1984' is frequently used to describe today’s Turkey, but Orwell would turn in his grave today. If you find this an exaggeration, I will give you a couple of examples.

"I’ll start with the most recent events. The [President Recep Tayyip Erdogan-backed leadership] are trying to sell us a one-man dictatorship as though it is democracy.

"The referendum [on 16 April to grant Erdogan more powers over the legislative branch of power] will be held under unequal circumstances, where everyone is sure there will be fraud, and where a person is branded a terrorist if he says he will vote 'no'.

"And the [leadership] present this referendum to us as the 'will of the nation'. They did not hesitate to turn the country into a bloodbath when the July 2015 general election result threatened their power and the oligarchic system they represent. At the end of the [Kurdish] peace process, the whole country turned into a graveyard.

"They want us to believe this is an advanced democracy and that press freedom is in its best ever era, and they say they have freed us from chains. But national and international organisations tell us: 'Turkey is the biggest prison for journalists in the world'.

"In the last ten years, pro-government loyalists liberally used the terms 'coup' and 'plotter' very liberally. Every anti-government movement was a 'coup' and every dissident was a 'plotter'. In fact, the actual military regimes and coups were welcomed by political Islamists in Turkey.

"The Justice and Development Party (the Erdogan-backed AKP Party) is itself the biggest example of this paradox of the illusion of democracy. They represent the mentality of darkness, but their logo is a light-bulb. They turn the country into a republic paved with cement, while destroying the environment and natural resources, and they call it development. And this trial itself shows their understanding of justice.

"Two of my lawyers are not here today. And not just them. My colleagues Murat Sabuncu, Kadri Gursel, Guray Oz, Turhan Gunay, Hakan Kara, Musa Kart and Onder Celik aren’t here either. They are in jail.

"When evil prevails, we need truth more than ever. Because when facts are written down, evil ceases to be the last word. Not speaking, not remembering and not allowing ourselves to remember is denying ourselves the truth.

"We [the journalists] were tried in courts because we refused to bow down to a government which has normalised totalitarianism. We chased the truth. The biggest legacy we inherited is the idea that saying what the powerful wants told is not journalism. The people who taught us this were or are still being punished with jail or exile. When this was not enough, they were silenced with bombs or bullets. The fight waged by the powerful against journalists in order to censor the truth has been going on since the dawn of journalism in this land.

"But this fight is futile. Because, whoever you are, you cannot fight an idea that has truth at its base. If you think you’re fighting it, you should know that you cannot win. You will lose again and again.”

The trial lasted eight hours. This was expected to be the last hearing in the case. The judge, however, annouced a further hearing for 12 April 2017.

As Ahmet was leaving the courtroom, he turned to his colleagues watching the trial and shouted:

“We will demolish this blockade.”