From Sevastopol we are taking a tour of the southern point of Crimea via its capital - Simferopol, then Alushta and Yalta, before going back to Sevastopol. 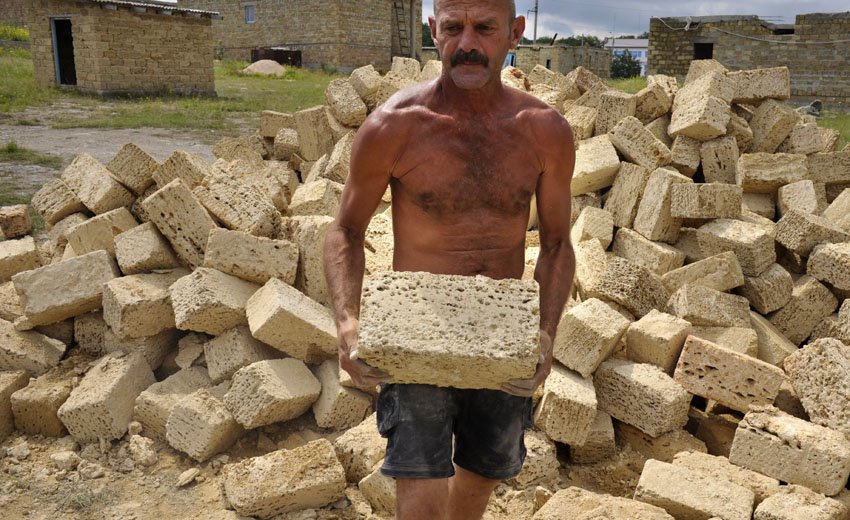 Sevastopol in Ukraine is where the Soviets deported the entire Tartar population (about 100,000 people) to Uzbekistan in 1944.

Although they were the first population the USSR deported, they were the last to be given permission to return by the post-Communists.

In the past twenty years 250,000 have returned to their homeland, only to find their houses inhabited by Russians or Ukrainians.

Most of these settlements were around the Black Sea, lands which are now considered extremely valuable due to tourism.

These people have been fighting the state, the police, the Cossacks and corporations for twenty years in order to reclaim their piece of land. 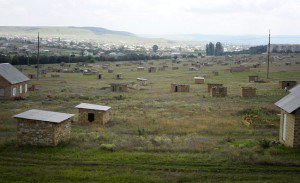 Sometime before lunch, we enter downtown Simferopol where a handful of men, women and children are protesting with placards and sirens under the blazing sun.

Passers-by don’t take notice of the bald, bushy-bearded or long-moustached men dressed in white. Three policemen are indifferently watching them from the shade.

The Tartars have resumed protests here as well as in Kiev. They’re asking for land, papers for the land they’re settling on and utilities.

Nariman, a tall, bony-faced, chestnut-haired, green-eyed young man is our guide. He’s an activist in Awdet, a Tartar organization. In addition to Russian, he also speaks a bit of German as he has worked in constructions in Zurich, Switzerland. 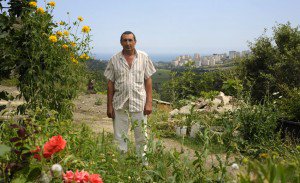 Narimar was born near Tashkent and arrived in Crimea in 1989. By 1990 his entire family had sold everything they had in Uzbekistan and tried to settle near the Black Sea, in the area from which they had been deported.

Narimar says that at the beginning of the 1990s the Tartars tried to buy back their own properties. The money received for the houses in Uzbekistan was next to nothing as other deportees had also sold their properties – just like Narimar’s family – and returned to the Black Sea region.

Moreover, when the Tartars returned, land prices in Ukraine skyrocketed. The Tartars demanded the government give them lands in the places their families had once lived.

Instead the government offered them plots hundreds of kilometres apart in a deserted and poor region of northern Crimea. The Tartars organized themselves and began to forcibly retake property.

In the Balaklovska neighbourhood, a military base of Simferopol was shut down. 42 hectares of land became available and the Tartars asked to be allotted a piece of land on which to build their houses.

The government said there wasn’t any available land and tried to sell it on the market.

The Tartars occupied the land by force, fought with the police and fought off ta private sale.

The battle is still ongoing in the courts.

Meanwhile, the Tartars have allotted land to 80 families and on each lot they have built adobe shelters – a four square-metre house with a roof and a door. These are a sort of Tartar squats.

Entire fields around Simferopol and the 30-kilometre road to the seaside are packed with such constructions. Those with a good financial situation have begun to build actual houses, to plant orchards and move their entire family, even if they lack both the necessary title deeds and the utilities.

Daniel Ametov, one of the leaders of the Tartar community has been charged with assault during the conflicts in Balaklovska. Narimar and I visited him in his house on the town’s outskirts where two new villages, Lugovoya and Stroganovka, have replaced the former deserted fields.

Daniel built his house on a terrain occupied 20 years ago. He managed to also obtain the papers for the house. On average, obtaining title deeds lasts about 10-15 years. Daniel gives us a brief account of his family’s stormy history:

"My great-grandfather was shot in 1919 when the Bolsheviks stormed into Crimea because he was an officer. In 1943, my grandfather was hanged in Simferopol by the Nazi army. My father was eight when in 1944, together with his eight brothers, was seized and deported to Uzbekistan."

Out of nine brothers, five died in 1945. Daniel returned to Crimea and has become one of the leaders of his community – which is costing him a made-up lawsuit for assault.

Narimar wants to show us one of the first settlements the Tartars took by force twenty years ago, near Alushta, a coast town. On our way there he points right and left to plains which the Tartars occupied and turned into villages.

The topic turns to the Cossacks, the main factor of turmoil used by the local government against Tartars.

"The Cossacks are mere actors, they do not see they are being manipulated," Narimar tells me.

In his opinion, there are no tensions whatsoever with the locals; the spirits are politically agitated around election periods.

He gives me an example: the government brought Cossacks to protest against the Tartars in one of the plains we have passed by, but the Cossacks quickly realized they could do with some land. According to Narimar, the Cossacks and the Tartars split the plain in two and occupied it together. Taking on the Tartar model, the Cossacks built little adobe houses which they’re still waiting to expand.

Izobilne is five kilometres from the coast, near Alushta. Seif, his uncle, has a heavenly household on a hilltop. In the background, one can see the rocky peaks of Crimean mountains.

His garden shields a valley covered by a vineyard and in the distance one can see the sea.

Seif was imprisoned for three months because he had fought the police. Not to this day has he received any title deed, but, on the other hand, he has every necessary utility.

Just like his neighbours, he makes a living out of tourism: he has turned his house into a boarding house. His yard is full of watermelons, peaches, apples and a lot of sycamores.

Down the valley, near the seaside, he points to a yellow patch of land which will soon be occupied by the Tartars. Narimar, his nephew, is going to build his house there.