Romania: the battle for justice no one wanted

Over 120,000 Romanians protest in central Bucharest, violence breaks out after a few hundred hooligans start chucking flares at the police: eye-witness report 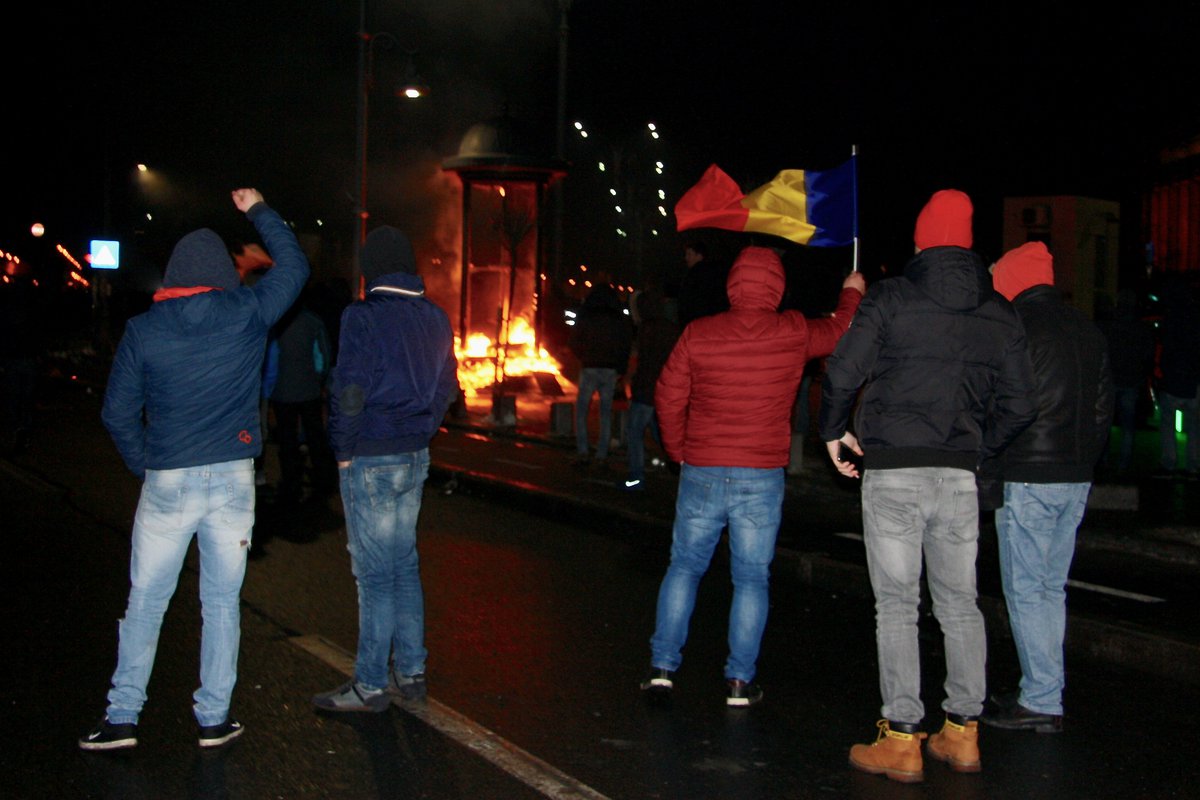 Bucharest 1 February 2017. A kiosk on fire. Tens of thousands of peaceful demonstrators leave as violence from a minority sparks up

I was not sure whether it was tear gas or pepper spray. It’s like chilli without the taste. It hits you at the back of throat. Instead of a flavour kick, it irritates you, resembling a cheap flu remedy. Then there is pain. And then the fear it could happen again.

Following a peaceful protest that attracted over 100,000 Romanians to demonstrate opposite the Government building in the capital’s central Piata Victoriei, violence broke out.

This is how it happened.

A group of hooligans started by setting off flares and chucking them at the cordon of armed riot police. The police stood firm, but were prepared. They had even positioned themselves in the exact location where the violence was about to escalate.

Then the plastic bottles started flying in the direction of the police. The crowd began to disperse. And opened up a pitch for a confrontation to take place. This did not happen at this stage. A few of the hooligans then began to pull out the metal cordons and throw them around the empty space. None of them attempted, as a group, to challenge or incite the police directly.

Some members of the rest of the crowd began to challenge the hooligans asking them what the fuck they were doing. This is a peaceful protest. Why are you messing this up? The answer was not to antagonize them further. Everyone from behind me began to shout “Without violence”.

Tens of thousands of people then began to leave the Piata - afraid of what might happen. The zone was then occupied by a few hundred men between the ages of 20 and 40, who began to throw snowballs at the police.

A few people started to sit down in the square. But this was not a university they were occupying with nice middle-class scholars - it was now an open square hosting rioters with an unclear intent.

When the police moved forward a few steps, they ran back, and when people start running, everyone starts running. Slowly the police began to occupy more areas of the Piata.

Then came the tear gas. It carried through the air and smack into the face of a few of the demonstrators who could not see, and had to be assisted by friends out of the central square. A few pockets of violence then began. This included a group who set fire to an advertising kiosk. When the firemen came to put out the flames, they told them to leave it and let it burn. Until I left, what followed were running battles between the riot cops and men chucking plastic bottles, flares and snowballs. It looked to be a few hundred men involved in urging a battle - possibly 500 or more. Since then more fires have started at the end of Calea Victoriei.

For five hours, the capital emptied onto the streets tonight. The crowd was angry and the crowd was peaceful. One could even call the demonstration boring and cold. In parts there was a carnival atmosphere, with drummers - even a man dressed as Dracula. The evolution of this protest was moving into a more creative direction.

One man was giving out plastic cups of popcorn instead of bullets. There were over 100,000 attendees. The media has alleged in the past that many of these were paid to be there. I hate to think who is losing so much money on these people. Their numbers increase with every new decision made by this Government.

No one wanted to come out on a sub-zero Wednesday in February to protest against a change in a legal code in Romania. This is not a fight that the people of Bucharest wanted to have. But they wanted to stand up for their principles. Romania is shuffling off its international stereotype as a poverty-stricken backwater that fuels the shitty jobs in western Europe to become, in only a decade, a model member of the European Union. Its fight against high level corruption is the envy of the rest of the region. Romania now has a brand. The brand of a justice system that is dynamic and effective. Romania is the country that gets results. And the people want to protect that brand, nurture it, and help it nourish the rest of the nation - which still sees huge disparities in wealth and the distribution of power.

This pitch battle (which is continuing as I write) will only confuse the issue. It is not representative of even a small fraction of the demonstrators. When there is violence, the news will focus on violence. The camera naturally turns to a blaze, or a screaming face, or a fist raised in the air. As journalists, we cannot shake this addiction to such dramatics.

The problem for the crowd was that these hooligans were organised, with a singular purpose, while the protestors were not.

Romania’s Government has declared a war on the war against corruption. The Government, backed by the Social Democratic Party, issued an emergency decree on Tuesday 31 January rendering public misconduct legal if the damages are less that 50,000 Euro.

This also gives amnesty to those who have been convicted or face indictment for these crimes in the past - which means the National Anti-Corruption Department has to drop cases against politicians who are investigated for such crimes. These decisions will affect over 2,000 cases brought by the DNA into official misconduct.

It is likely this would include the current president of the Social Democratic Party (PSD), Liviu Dragnea, viewed as the kingmaker of the current Government.

Officially the move is intended to reduce overcrowding in prison, but the focus on official misconduct, rather than minor crimes such as theft, indicates that this will favour an amnesty on public officials.

One of my friends said this will “set fire to the country to save politicians from prison”. So far, only advertising kiosks have been burnt down. As I write, this may have gotten worse.

Romania has become a model in the region for fighting corruption due to the efforts of the Anti-Corruption Department (DNA) which investigates graft and malfeasance among high-level officials.

The President of Romania, Klaus Iohannis, said: “The Government has ignored the dreams and aspirations of millions of free Romanians who want to live in a country liberated from corruption.”

One hopes those dreams and aspirations may not have gone up in the flames of a kiosk in Bucharest’s central business district.